Learn You a Haskell for Great Good! 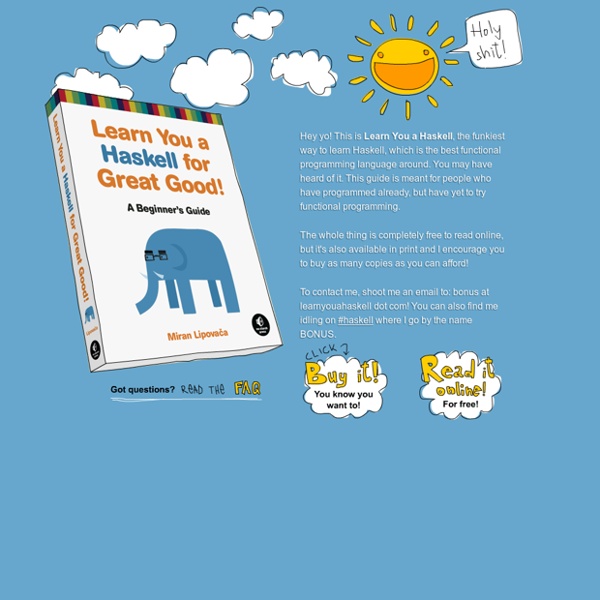 Hey yo! This is Learn You a Haskell, the funkiest way to learn Haskell, which is the best functional programming language around. You may have heard of it. This guide is meant for people who have programmed already, but have yet to try functional programming. The whole thing is completely free to read online, but it's also available in print and I encourage you to buy as many copies as you can afford! To contact me, shoot me an email to: bonus at learnyouahaskell dot com!

View topic - Haskell vs Prolog, or "Giving Haskell a choice" I've become more and more familiar with Haskell, and more and more have I begun to realize its true potential. It's truly frightening, really. One of the things I've started to realize is how well it can adapt different programming paradigms without sacrificing its functional purity.Another language I'm quite fond of is Prolog, and I'm actually somewhat sad I haven't spent more time hacking in it.That said, I decided to try a little experiment: writing Prolog in Haskell, staying as true to Prolog as possible, and see if the forced paradigm breaks it. I'll be rather thorough in explaining how things work for the benefit of the Prolog and Haskell illiterates out there, so if you're familiar with both you might want to tl;dr, or just bask in the glory that is Prolog and Haskell combined.

mode for Emacs There are many Emacs packages and modules for Haskell. The most prominent ones are haskell-mode, ghc-mod and Scion. 1 Newbie guide Emacs is an extensible texteditor which can be extended with so-called "modes" and makes great use of keystrokes. Modes are written in Emacs Lisp (.el) programming language and provide additional commands and keystrokes.

Haskell The Haskell Programming Language Haskell is an advanced purely-functional programming language. An open-source product of more than twenty years of cutting-edge research, it allows rapid development of robust, concise, correct software. With strong support for integration with other languages, built-in concurrency and parallelism, debuggers, profilers, rich libraries and an active community, Haskell makes it easier to produce flexible, maintainable, high-quality software. News Upcoming Events One Day, We Will All Be Programmers I probably spend more time than I should thinking about the economy. When I do, I often think about what it is most residents of the West do for a living, which I like to call the “economic profile” of the West. (Others call this employment by sector.) I think about how that profile has changed in the last hundred or so years, and about how it might change in my lifetime.

Composing Reactive Animations Conal Elliott Microsoft Research Graphics Group Copyright 1998 We have all seen a lot of wonderful looking computer graphics, and many of us have spent time playing video games or watching our kids (or their kids) play them. It is clear that computer graphics, especially interactive graphics, is an incredibly expressive medium, with potential beyond our current imagination. Affordable personal computers are capable of very impressive 2D animation and multi-media. Interactive 3D graphics is already available, and soon it will be standard for new personal computers.

Hoogle - st lib Hoogle is a Haskell API search engine, which allows you to search many standard Haskell libraries by either function name, or by approximate type signature. Example searches: map (a -> b) -> [a] -> [b] Ord a => [a] -> [a] Data.Map.insert Enter your own search at the top of the page. Introduction Haskell is a computer programming language. In particular, it is a polymorphically statically typed, lazy, purely functional language, quite different from most other programming languages. The language is named for Haskell Brooks Curry, whose work in mathematical logic serves as a foundation for functional languages. Haskell is based on the lambda calculus, hence the lambda we use as a logo. 1 Why use Haskell? Writing large software systems that work is difficult and expensive.

Why I love Lisp This post was extracted from a small talk I gave at Simplificator, where I work, titled “Why I love Smalltalk and Lisp”. There’s another post titled “Why I love Smalltalk” published before this one. Desert by Guilherme Jófili Lisp is an old language. Very old. Today there are many Lisps and no single language is called Lisp today. Typeclassopedia By Brent Yorgey, byorgey@cis.upenn.edu Originally published 12 March 2009 in issue 13 of the Monad.Reader. Ported to the Haskell wiki in November 2011 by Geheimdienst. This is now the official version of the Typeclassopedia and supersedes the version published in the Monad.Reader. Please help update and extend it by editing it yourself or by leaving comments, suggestions, and questions on the talk page.

Introduction - Learn You a Haskell for Great Good! About this tutorial Welcome to Learn You a Haskell for Great Good! If you're reading this, chances are you want to learn Haskell. -= Perlis Languages =- Perlis Languages this is another entry in a series on programmer enrichment A language that doesn’t affect the way you think about programming is not worth knowing. — Alan Perlis Haskell Haskell is a functional programming language. If you have some programming experience, see the overview to see a bit of how Haskell works and is different from other languages. Haskell is distinct in a few ways: