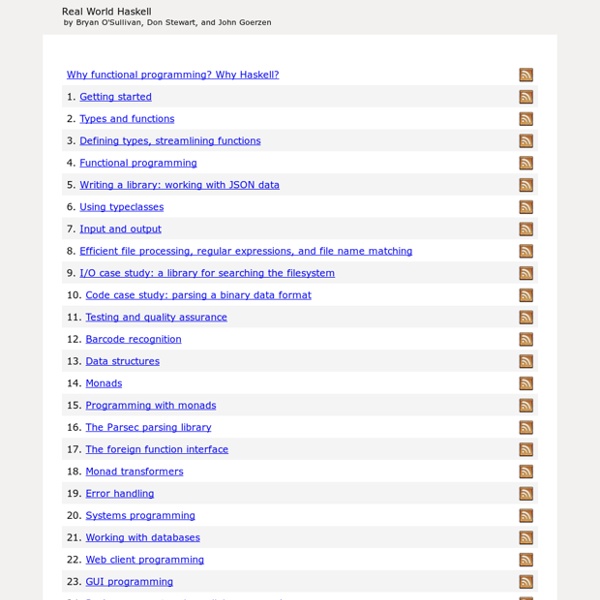 Composing Reactive Animations Conal Elliott Microsoft Research Graphics Group Copyright 1998 We have all seen a lot of wonderful looking computer graphics, and many of us have spent time playing video games or watching our kids (or their kids) play them. It is clear that computer graphics, especially interactive graphics, is an incredibly expressive medium, with potential beyond our current imagination.

Beginning Haskell Before you start About this tutorial This tutorial targets programmers of imperative languages wanting to learn about functional programming in the language Haskell. In an introductory tutorial, many of Haskell's most powerful and complex features cannot be covered. Introduction - Learn You a Haskell for Great Good! About this tutorial Welcome to Learn You a Haskell for Great Good! If you're reading this, chances are you want to learn Haskell. Well, you've come to the right place, but let's talk about this tutorial a bit first. I decided to write this because I wanted to solidify my own knowledge of Haskell and because I thought I could help people new to Haskell learn it from my perspective.

The Fun of Programming Some of the code and software from the book is available from the links below. Please note that the software versions will be those from around the time of publication of the book and are provided here for the convenience of those wishing to "dip into" the chapters or use a version known to work with the examples in them. If you want to use any of these pieces of software seriously, you are strongly encouraged to obtain the latest version from the appropriate webpage, linked below. Typeclassopedia By Brent Yorgey, byorgey@cis.upenn.edu Originally published 12 March 2009 in issue 13 of the Monad.Reader. Ported to the Haskell wiki in November 2011 by Geheimdienst. Learn Haskell Fast and Hard I really believe all developers should learn Haskell. I don’t think everyone needs to be super Haskell ninjas, but they should at least discover what Haskell has to offer. Learning Haskell opens your mind. Mainstream languages share the same foundations:

Introduction Haskell is a computer programming language. In particular, it is a polymorphically statically typed, lazy, purely functional language, quite different from most other programming languages. The language is named for Haskell Brooks Curry, whose work in mathematical logic serves as a foundation for functional languages. Haskell is based on the lambda calculus, hence the lambda we use as a logo.

Haskell Functions for Javascript Introduction I've been doing a small Haskell project for the Uni and got really interested in this language and the Functional paradigm in general. I suddenly felt like porting some of this cool functionality to Javascript. Haskell « A Critical Systems Blog Looking to make a statement this holiday season? You could try to win the office “ugly holiday sweater” contest. Or, you could play “Jingle Bells” on your Arduino microcontroller, using Haskell. This post is about the latter. We’re going to write this small program using the Copilot embedded domain-specific language (on Hackage and the source on Github).

Haskell Haskell is a functional programming language. If you are a seasoned programmer, consult the overview to see what makes Haskell unique and different from other languages. Haskell is distinct in a few ways: Haskell is pure. A function when invoked using the same arguments will return the same result every time.Haskell is lazy. Making A Website With Haskell - adit.io This is a guide to building and deploying a simple website using Haskell. We will use: Scotty for the backend Blaze-html for templating and Persistent for the ORM.