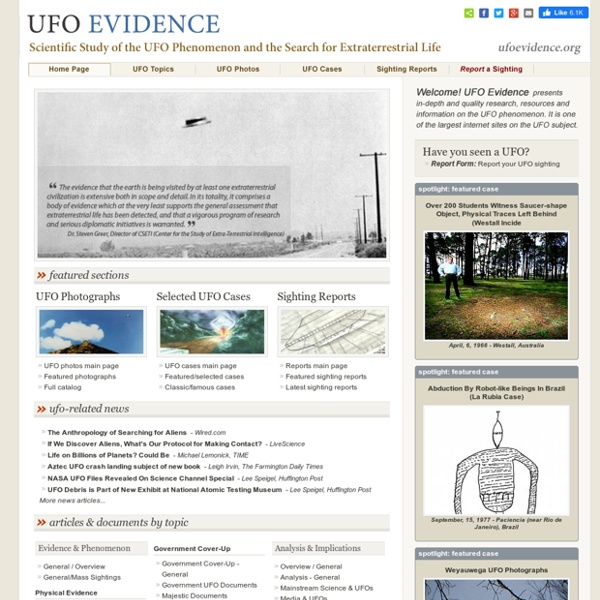 1974 - marinette, Wisconsin, United States Two white oval object bouncing up and down motion then slowly bounce across the clearing into a wooded area. October, 14, 1990 - Patan, Baitadi, Nepal This happened with me in the Far-Western Development Region of Nepal on 14th October 1990. I was followed and tracked by U.F.O. in night and felt different feelings in a downward sloping through cut hill road. Lastly I have to walk very fast in the downward slope of the road to get escaped myself from the lifting force of the U.F.O. 2013 - Oakwood, Gainesville, Georgia, United States Animal response to visitation and close encounter with 150ft diameter elliptical mass of bright white light June, 2012 - Putnam Valley, New York, United States Witnessed a hovering glowing orb which disappeared by shooting straight up into the sky. More sighting reports...

Majestic Documents.com: Evidence We Are Not Alone Majestic Documents.com is a groundbreaking look at the United States UFO program called Majestic and the top secret government documents that tell the story of presidential and military action, authorization, and cover-up regarding UFOs and their alien occupants. A remarkable work of investigative journalism, this website is the first to authenticate top secret UFO documents that tell a detailed story of the crashed discs, alien bodies, presidential briefings, and superb secrecy. Special attention is paid to the forensic authentication issues of content, provenance, type, style and chronology. The story the documents tell leaves the reader with little doubt that the cover-up is real, shocking, and at times unethical. Operation Majestic-12 was established by special classified presidential order on September 24, 1947 at the recommendation of Secretary of Defense James Forrestal and Dr.

List of UFO sightings From Wikipedia, the free encyclopedia This is a list of sightings of alleged unidentified flying objects (UFOs), including reports of close encounters and abductions. Second millennium BCE[edit] Raymond Fowler Dan Boudillion: Ray, with 5 books on the Andreasson affair, you and your name have become inexorably linked with it. I find it suggestive that in the end the same thread of buried contact memories may have run a parallel course through your life as well. Are your and Betty Andreasson Luca’s experiences linked at some deeper level beyond coincidence?

The memo that 'proves aliens landed at Roswell'... released online by the FBI By Daily Mail Reporter Updated: 07:37 GMT, 11 April 2011 A bizarre memo that appears to prove that aliens did land in New Mexico prior to 1950 has been published by the FBI. The bureau has made thousands of files available in a new online resource called The Vault. Among them is a memo to the director from Guy Hottel, the special agent in charge of the Washington field office in 1950. Proof of (alien) life? A copy of the 1950 memo that recounts the discovery of flying saucers and aliens in New Mexico.

Newly released files from The National Archives Skip to Main Content Home > UFOs UFOs 2015 GO FAST FOOTAGE — To The Stars Academy GO FAST is an authentic DoD video that captures the high-speed flight of an unidentified aircraft at low altitude by a F/A-18 Super Hornet ATFLIR forward-looking infrared system. While TTSA was the first to obtain a copy, it should be available to any member of the press or public via the Freedom of Information Act. Background This video, GO FAST, was captured by a U.S. Navy F/A-18 Super Hornet using the Raytheon AN/ASQ- 228 Advanced Targeting Forward-Looking Infrared (ATFLIR) Pod. Adventures in Data Analysis-UFO Sightings and Visualizations in CartoDB Today my project was to visualize time series data in CartoDB. I discovered CartoDB about two weeks ago, read their blog (check out Fredo Baart’s water current simulation to see if the Alcatraz escapees could have survived) and fell in love. Excited to get started I grabbed the UFO sighting dataset from the National UFO Reporting Center and went to work. It is very easy to get started with the software.

GrahamHancock.com I don't want GRAHAMHANCOCK.COM to be exclusively a Graham Hancock site, but a place where ideas and perspectives on the past can be put forward and discussed by other writers and researchers as well -- and indeed by anyone with something interesting to say and the ability to say it. Accordingly I'm offering this section of the site as a FORUM for the excellent writing and thought-provoking ideas of others. I offer no set guidelines as to what is or is not "relevant". If you think that a piece of your own original writing would fit in well in these pages then please submit it to me for consideration. You should feel completely free to express points of view, opinions, ideas and beliefs with which I may profoundly disagree; all that matters is that you should express them well in a manner which may be of interest or of value to others. Items that you would like me to consider for publication in FORUM should be submitted by email to forum@grahamhancock.com.

How to Think of What to Draw Edit Article Edited by Dvortygirl, Laptop123, Nicole Willson, Random and 41 others Have you been inspired to draw, including getting inspiration from famous artists, or are just doing it for fun? Drawing can often be fun, but sometimes it can be hard to think of ideas for what to draw. Recollections of Roswell (download torrent) UFO - Recollections of Roswell Part II Type: Video > Other Files: Size: 807.44 MiB (846657128 Bytes)

Glowing Auras and ‘Black Money’: The Pentagon’s Mysterious U.F.O. Program Officials with the program have also studied videos of encounters between unknown objects and American military aircraft — including one released in August of a whitish oval object, about the size of a commercial plane, chased by two Navy F/A-18F fighter jets from the aircraft carrier Nimitz off the coast of San Diego in 2004. Mr. Reid, who retired from Congress this year, said he was proud of the program. “I’m not embarrassed or ashamed or sorry I got this thing going,” Mr.

An Overview of "The Gift" By Doug Ruby "The Gift" is a book about the decipherment of the crop circles. Many of the people who have read the book whole heartedly agree with me that I have, indeed, deciphered the crop circles. This statement should be tempered with the acknowledgement that there are many forms of information being communicated by the crop circles. Consequently, it will be through a group effort that the crop circles are deciphered in their entirety. With this said, let's take a quick look at what I have discovered and in the process offer you an overview of the book. After reading a number of crop circle books, I arrived at three rather stunning conclusions.

Clifford Stone - UFO Researchers & People Clifford Stone Clifford Stone is unique among those experiencing and investigating UFO and ET phenomenon. He spent 22 years in the US Army as a part of an extremely elite and secret group that was rapidly dispatched to crash sites in order to recover UFO or ET craft, bodies, and artifacts. Since his retirement from the Army, he has devoted his time to a diligent Freedom of Information Act search of government archives. He maintains that we have knowledge that intelligent life is visiting this planet in craft capable of traveling distances of many light years very quickly; effectively bypassing acceptably known physics.