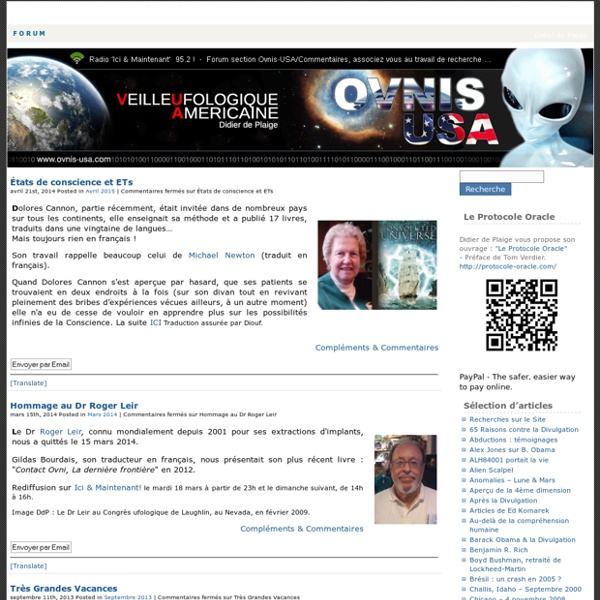 Mars Anomaly Research Home Page Remember that all visual evidence at this site is drawn from, verifiable in, and supported by the official science data. Links to the associated official science data is always provided to both encourage and facilitate verification. Absolutely no evidence alterations have been made except to enhance clarity. There is no need for a leap of faith. Presenting Evidence to Open Minds Paul Dean, a UFO researcher in Australia, has been scouring the online digitized files of the National Archives of Australia for UFO reports, and he has found a few. His latest hit has been in the Australian Bureau of Meteorology. He has come across a file of scanned letters from 1972 to 1981 that contains UFO reports. The file, titled Observations – general by outside authorities (including UFO) [Commonwealth Bureau of Meteorology], mostly contains reports of weather phenomenon, such as tornadoes or dust clouds. There are also astronomical reports, such as of meteorites.

Russian flight controllers find UFO with aliens that speak in 'cat-like language' By Daily Mail Reporter Updated: 07:29 GMT, 3 March 2011 Air traffic controllers in Siberia claim they were buzzed by a high-speed UFO with a female sounding alien who spoke in an unintelligible cat-like language. The mystery object suddenly burst onto flight monitors over the remote Russian diamond capital of Yakutsk. It was shown flying at a speed of slightly over 6000 mph, and rapidly changing direction in the early morning sky, it is claimed. Mindbomb: The Gulf Wars and the Gate of the Gods, Redux I don't know if John Lilly's version of the omniscient Orbital Machine Intelligence (OMI) which he named ECCO (for "Earth Coincidence Control Office") is as true or as real than any other OMI fever-dream. But I do know that when you really dig into the study of Synchronicity-- when you peel away all of the simple coincidence and happenstance and approach the phenomenon with a brutal rigor-- it becomes very hard not to begin to see it as the provenance of a force or an intelligence that is definite. Which is to say not a nebulous, pie-in-the-sky, touchy-feely "energy" or "consciousness," but an agency. There have been times when Synchronicity seemed to volley back and forth with me in real time, when it answered questions that I had asked quite clearly in my mind just as if we were having a conversation. I found that the more rigorous I became-- mostly meaning the fewer variables I kept in play-- the more powerful and specific Synchronicity became in turn.