The Top 100 Documentaries We Can Use to Change the World 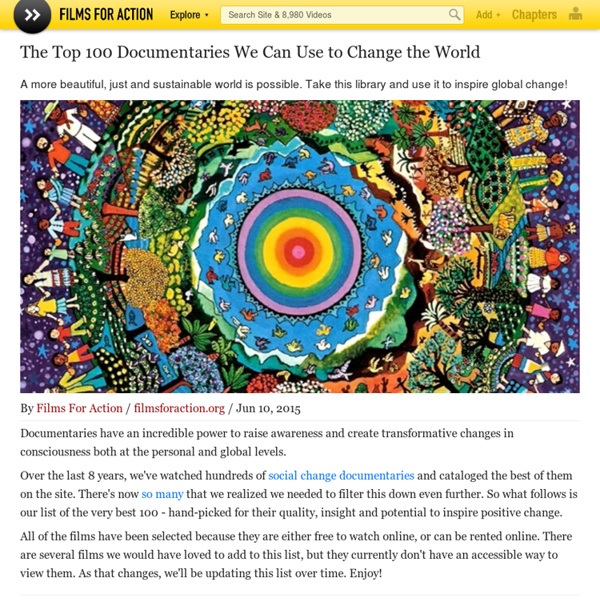 By Films For Action / filmsforaction.org/ Jun 10, 2015 Documentaries have an incredible power to raise awareness and create transformative changes in consciousness both at the personal and global levels. Over the last 8 years, we've watched hundreds of social change documentaries and cataloged the best of them on the site. There's now so many that we realized we needed to filter this down even further. So what follows is our list of the very best 100 - hand-picked for their quality, insight and potential to inspire positive change. All of the films have been selected because they are either free to watch online, or can be rented online. Did we miss anything really good?

Eden Project takes ecological restoration to global stage - Daily Planet Eden Project, a spectacular ‘indoor rainforest’ that transformed a disused quarry in southwest England in 2001, is launching a series of Eden-inspired projects around the world. The new projects in China, Australia and New Zealand will focus on environmental issues, including soil, water, food, and biodiversity, educating people and helping drive ecological restoration. Eden Project co-founder Sir Tim Smit said: “Eden’s mission is to explore our dependence on the natural world, to use that understanding to excite people into delivering transformation where they live and to ask really serious questions about what a great future might look like for all of us.” China

HUMAN (2015) What is it that makes us human? Is it that we love, that we fight? That we laugh? Cry? Our curiosity? Earth - Your life on earth Explore BBC Earth's unique interactive, personalised just to you. Find out how, since the date of your birth, your life has progressed; including how many times your heart has beaten, and how far you have travelled through space. Investigate how the world around you has changed since you've been alive; from the amount the sea has risen, and the tectonic plates have moved, to the number of earthquakes and volcanoes that have erupted. Grasp the impact we've had on the planet in your lifetime; from how much fuel and food we've used to the species we've discovered and endangered.

You could live in this dream eco home for less than the price of a 1 bed London flat – EcoHustler Extraordinary and exemplary Earth Ship with land in Wales on the market now and available to buy This extraordinary and exemplary eco home (hobbit mansion), surrounding lands and greenhouses are on the market and available to buy now. Offers above £250k will be considered. Read on to find out more… All photos by Simon Dale \_©_ Living the Wild Dream in an Age of Control Stark warning from ex Bank of England regulator 19th November 2015 In an important speech given at the Finance Watch conference in Brussels on Tuesday, Robert Jenkins — a former member of the Bank of England’s financial policy committee — highlighted the dangers of a two-tier justice system in which senior bankers are effectively ‘above the law’. He also said that 47 banking scandals and the feeble nature of most post-crisis financial reforms suggest that governments around the world would be ill-advised to cave in to the demands of bankers and finance sector lobbyists seeking a return to ‘business as usual’ When timidity triumphs

The Po-Mo Page: Postmodern to Post-postmodern Approaching the Main Questions Postmodernism/Postmodernity is associated with an awareness of societal and cultural transitions after World War II and the rise of mass-mediated consumerist popular culture in the 1960s-1970s. In culture and the arts, interpreters of this era describe the kinds of cultural hybrids that emerge from mixing (or rendering inoperative) the categories of "high" and "low" cultures, and hybrids in cultural forms that have developed in regions where local identities seek definition against, or in dialog with, Western "hegemonic" cultures (the mixing of "official" cultures and those defined as "other" in modernist ideologies). Postmodern views of history and national identity typically cancel a commitment to modern "master narratives" or "metanarratives" like progress and goal-directed history, and disrupt myths of national and ethnic identities as "natural" foundations of "unity." Primary Problem: Constructing Trajectories of History and Culture What was Modernism?

Mexico's First "Smart Forest City" Will Be 100% Food and Energy Self-Sufficient Architecture firm ‘Stefano Boeri Architetti’ based in the Italian city of Milan has recently unveiled some mind-blowing designs for a nature-inspired “smart city” in Cancun, Mexico. The city will serve as a blueprint for innovative and sustainable urban planning. The project has been created for Honduras-based property developer Grupo Karim, and is a direct alternative to plans for a shopping district to be built in the area. The smart city would reforest a 557-hectare sand quarry for hotels with the hope of being that completely food and energy self-sufficient.

Nonviolent Communication Basics (2000) The Basics of Nonviolent Communication with Marshall Rosenberg, Phd, is a recorded presentation of a 1-day workshop held in San Francisco, CA in April 2000. "The purpose of Nonviolent Communication is to help you learn what you already know how to do... but forget ... because we've been educated to forget." In this video, Marshall Rosenberg shares a philosophy that challenges the current paradigm of war that contributes to violence in relationships, society, and to our planet. "Even though we could be playing the game, 'Make Life Wonderful,' we have been educated to play another game: 'Who's Right?'" Marshall presents ways of interacting with each other in authentic, effective, and powerful ways so that the way we interact in our most personal relationships is aligned with our values for the change we want to see in the world.