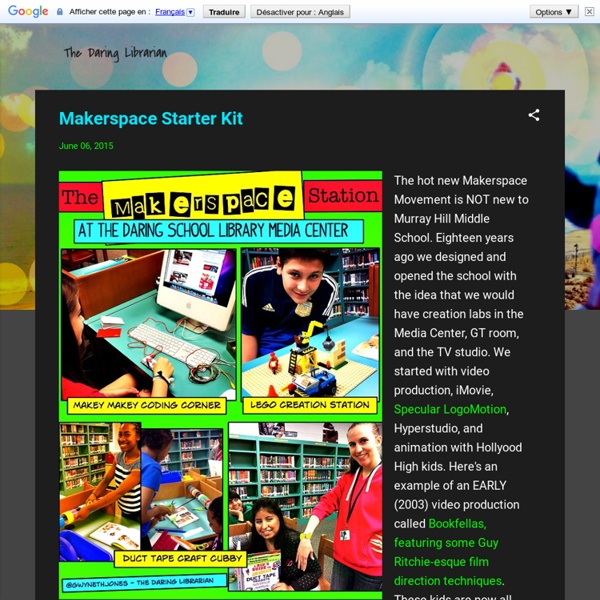 The hot new Makerspace Movement is NOT new to Murray Hill Middle School. Eighteen years ago we designed and opened the school with the idea that we would have creation labs in the Media Center, GT room, and the TV studio. We started with video production, iMovie, Specular LogoMotion, Hyperstudio, and animation with Hollyood High kids. Here's an example of an EARLY (2003) video production called Bookfellas, featuring some Guy Ritchie-esque film direction techniques. These kids are now all grown up and we've kept evolving, too! It's OK to Start Small! I re-purposed some of my empty study carrels for this Makerspace center at the top corner of our library. As I asserted in a recent blog post about new Ed Tech trends, fads, & tech -you can start small and You Don't Have to Marry It! For the Duct Tape Craft Cubby, I used a spring loaded curtain rod to hold the duct tape rolls, bought a bright blue colored shower caddy for the scissors and other tools. Amazon Delivers! FUND Me!

The True Adventures of a High School Librarian: JCHS MakerSpace a Go Go! The adventure of creating a MakerSpace in the James Clemens High School library has taken off with a lot of help from my friends! Once my principal, Dr. Brian Clayton, approached me about bringing a MakerSpace to the JCHS Library this year the first thing I did was crowd source my amazing PLN for ideas and resources. Want to Start a Makerspace at School? Tips to Get Started As the Maker Movement starts to gain momentum, schools that are trying to find ways to foster the do-it-yourself environment can learn a few lessons from another nexus in the universe: public libraries. Dale Dougherty, founding editor and publisher of Make Magazine — and the de facto leader of the Maker Movement — has a vision to create a network of libraries, museums, and schools with what he calls “makerspaces” that draw on common resources and experts in each community. Libraries and museums, he said, are easier places to incorporate makerspaces than schools, because they have more space flexibility and they’re trying to attract teens with their programs. “Schools have already got the kids,” Dougherty noted wryly, at the recent American Library Association Midwinter Meeting in Seattle. One day during the conference, dubbed Maker Monday, focused on the Maker Movement, which emphasizes learning by engaging in tech-related projects. “Why are you here?”

The Flipped Learning Process Visually Explained April 2, 2015 After yesterday’s post on “Flipped Learning Resources” one of our readers emailed us this beautiful visual outlining the six main steps involved in the creation of a flipped classroom. These steps include: planning, recording, sharing, changing, grouping, and regrouping. Read the graphic for more details on each of these steps.

6 Fun Ways Kids Can Join the Maker Movement Children are natural makers — give a kid a cardboard box, and she’ll transform it immediately into an oven, a spaceship, an elevator, or something else that I probably cannot imagine. Recent years have seen a growth of the maker movement, or an enthusiasm for inventing and creating new technologies and tools, in the U.S., Europe, and many countries across the world. Here is a look at the origins of the maker movement, how it fosters creativity, and some of the resources available to kids. How the Maker Movement Got Started The maker movement has its origins in the do-it-yourself (DIY) attitude. Dale Dougherty is credited with having started the movement with the launch of Make: magazine in 2005.

Creating a School Library Makerspace: The Beginning of a Journey Our library at Silver Creek High School in Longmont, CO is an active hub for extracurricular activities. We host an Anime Club, monthly Poetry Slams, and Book Buddies, but I felt like we could do more. I wanted something that I could tie to student learning which would promote inquiry, giving students opportunities to solve problems and find answers to questions. My assistant and I began looking at innovative library programs and community partnerships. Many of the teacher librarians in my professional network have been expanding their libraries by adding makerspace opportunities, classroom collaboration, and even 3-D printers. I used these folks as inspiration.

Flip This Library: School Libraries Need a Revolution School libraries need a revolution, not evolution One of the biggest business battles of our time is between Microsoft and Google. The two have very different business models. A Librarian's Guide to Makerspaces: 16 Resources "There were more than 135 million adult makers, more than half of the total adult population in America, in 2015." What is a makerspace? You’ve no doubt been hearing that word more than a few times over the past several years.

Arduino + Chromebook With over 5 Million units sold in 2014 alone, Chromebooks are a growing trend among schools and homes. One of the biggest drawbacks to Chromebooks has been the inability to connect it to any hardware (i.e. Arduino) -- until now. Favorited Favorite 2 Where EdTech meets TechEd Create a school makerspace in 3 simple steps As maker education gains steam, many educators are looking for ways to incorporate making and tinkering into their schools and classrooms — often on a shoestring budget. “Kids are saying they want to learn more about technology and science, but they also want to experience it creatively and use it personally,” said Dale Dougherty, founder of Make Media, which produces Maker Faire and Make Magazine. He’ll address how educators can deliver these types of experimental learning experiences during ISTE 2014’s EdTekTalks, a provocative series of mini-keynotes from thought leaders beyond the world of ed tech. “One of the ways we can do that is create more makerspaces for kids. Part of my talk will be leading the charge to say let’s build more makerspaces inside schools, libraries and even community centers.” But what makes a makerspace?

It's Never Too Late to Flip! As the upper school librarian at the Bullis School in Potomac, Md., a northwest suburb of Washington, D.C., I’m viewed as a valued resource by teachers who are preparing to embark on research projects with their students. Unfortunately, I don’t have the luxury of spending more than a single class period with students, so it is important that I use the time well. Toward that end, I have developed a set of tools that allows me to optimize my time with them by “flipping” what are traditionally viewed as classroom tasks (lectures) with what are traditionally viewed as homework tasks (researching and writing). I give them information about conducting library research before we ever meet, and I use the time in the classroom to help them digest and use that information to complete their work. A great deal of flipped learning is occurring in classrooms, but it’s clear to me that the library or media center is a perfect place for flipping.

Mobile Maker Spaces The production cart includes a tripod with iPad Pro mount, a piano keyboard, professional lighting, mics, headphones, and various items to help students produce movies, videos, and podcasts. The concept was pretty straightforward, but the logistics were a bit complicated. We wanted to create four mobile maker space carts that could rotate among four middle school libraries in the Knox County School district of Knoxville, TN. Designing a School Makerspace Makerspaces, STEAM labs and fab labs are popping up in schools across the country. Makerspaces provide hands-on, creative ways to encourage students to design, experiment, build and invent as they deeply engage in science, engineering and tinkering. A makerspace is not solely a science lab, woodshop, computer lab or art room, but it may contain elements found in all of these familiar spaces. Therefore, it must be designed to accommodate a wide range of activities, tools and materials. Diversity and cross-pollination of activities are critical to the design, making and exploration process, and they are what set makerspaces and STEAM labs apart from single-use spaces.

Starting a School Makerspace from Scratch With the National Week of Making behind us, you might be ready to start a makerspace in your school -- but not know where to start. Will purchasing a costly 3D printer and the latest robotics kit ensure learning and maker success? What are some steps to starting a successful makerspace from scratch?