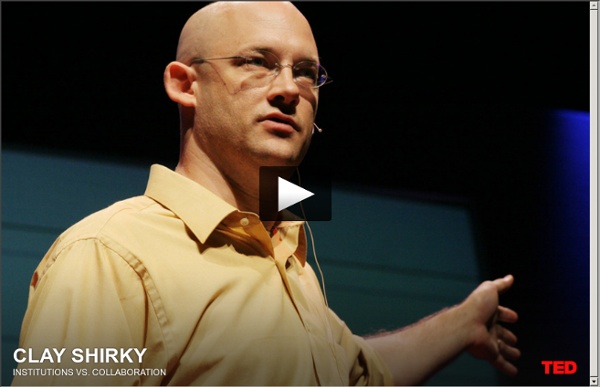 Community of practice A community of practice (CoP) is a group of people who share a craft and/or a profession. The concept was first proposed by cognitive anthropologist Jean Lave and educational theorist Etienne Wenger in their 1991 book Situated Learning (Lave & Wenger 1991). Wenger then significantly expanded on the concept in his 1998 book Communities of Practice (Wenger 1998). A CoP can evolve naturally because of the members' common interest in a particular domain or area, or it can be created deliberately with the goal of gaining knowledge related to a specific field. It is through the process of sharing information and experiences with the group that members learn from each other, and have an opportunity to develop personally and professionally (Lave & Wenger 1991).

blog - Clay Shirky Fifteen years ago, a research group called The Fraunhofer Institute announced a new digital format for compressing movie files. This wasn’t a terribly momentous invention, but it did have one interesting side effect: Fraunhofer also had to figure out how to compress the soundtrack. The result was the Motion Picture Experts Group Format 1, Audio Layer III , a format you know and love, though only by its acronym, MP3. The recording industry concluded this new audio format would be no threat, because quality mattered most. Who would listen to an MP3 when they could buy a better-sounding CD at the record store? Then Napster launched, and quickly became the fastest-growing piece of software in history.

Clay Shirky: How cellphones, Twitter, Facebook can make history Technology TED Radio Hour asks: “Why do we collaborate?” This week’s TED Radio Hour examines “Why We Collaborate,” exploring why, and how, millions of people come together to work on online projects, sometimes for free. The episode begins with Jimmy Wales, the founder of Wikipedia, who spoke at TEDGlobal 2005, back when the site was still very new. The incredible growth of Wikipedia since […]

Morality in Monkeys: A fascinating and funny TED Talk by April 16, 2012 in Speech, TED talks by Any frequent reader will be well aware of my obsession with TED. I am consistently amazed that they can find people who can speak so eloquently and humorously about such nerdy topics. Perhaps they offer training, or maybe they just refuse all the really nerdy ones. How In-Person Meetups Are Fixing The Problem With MOOCs By Paul Glader, Managing Editor of WiredAcademic BERLIN – Somewhere between the cookie cutter Prussian-style classroom model of education and the lone-ranger online learning idea lurks the blended learning ideal, where one can have concentrated individualized learning time balanced with work among a small community of like-minded learners. Plato and others had this figured out thousands of years ago. It’s coming back.

Cognitive Surplus by Clay Shirky Every single year for the second half of the 20th century, the amount of television watched by humanity increased. Collectively, we now watch more than one trillion hours of television every year – something not entirely unlike, as Clay Shirky sees it, tipping the free time of the world's educated citizenry (their "cognitive surplus") down an intellectual plughole. It's not that television is evil, or even bad. It's just that, as a medium, it's incredibly good at soaking up leisure and producing very few tangible results. It tells stories, it makes people feel less alone, it passes the time.

A Simpler Social Technographics Ladder I’ve been thinking about how we use social media. How can we characterize what we do? I have always used Charlene Li and Josh Bernoff’s Social Technographics ladder for thinking about the various levels of social media participation. I want to make it simpler for use in teaching others about social media. Perhaps there could be as few as 4 levels of involvement: Worried about your future? Why Joining a Co Working Site is a Good Idea Look at the growth of Co Working sites. What is going on? What is going on is that we are seeing the emergence of the new face to face workplace that fits the life of the freelancer – who is at the core of the real new economy. (All images from the 2nd global survey of co working – PDF here) The Extension Educator's Role as 21st Century Platform Builders - Oct 3, 2012 Conference Session This event is part of the eXtension 2012 National Conference Session #703 Meeting Room 1