Touch Pianist - Tap in Rhythm and Perform Your Favourite Music 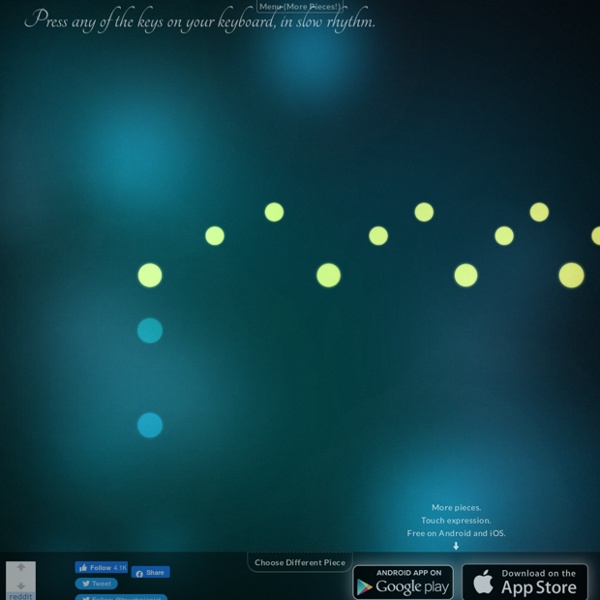 What is Filk? Singout article Filk Music by Jordin Kare No, that's not a typographical error (although the word started as one, long ago). Filksongs and filksinging are the folk music of a time and a community, just as, say, Celtic ballads, or new England sea chanteys are — except the time is today (or tomorrow) and the community is science fiction and fantasy fandom. - make music together let's get started making music... 1draw on the grid with your mouse to make a beatshow me2 save your track and share it with friends. show me3 out of ideas? roll the dice and start remixing. show me4 explore the beatlab community show me For more tips, tutorials vidoes, and FAQs, check out our community wiki. You can use the following keyboard shortcuts while composing a track. Positive Mindset And You – How to Become a Happier Player I don’t view myself as a master of Zen or as a person who is completely immune to the constant negativity that Dota 2 exposes us to, but right now I’m in a rather peaceful mindset in and out of Dota. Fons has called me “Zen-lini,” and perhaps one of the most alluring parts of the stream is my positivity. I would like to share some history and some advice on that front in hopes that it can lead you to having more fun in Dota 2 and more importantly, being more happy in life. Story time: “Back in my day…” When I first started playing Dota (~8-9 years ago), I wasn’t the most pleasant person to play with. I didn’t have a quick temper, but I was certainly quick to judge players.

Highland Cathedral Highland Cathedral is a popular melody for the Great Highland Bagpipe. This melody was composed by German musicians Ulrich Roever and Michael Korb[1] in 1982 for a Highland games held in Germany.[2] It has been proposed as the Scottish national anthem to replace unofficial anthems Scotland the Brave and/or Flower of Scotland.[3] It has subsequently undergone various orchestrations and had lyrics added in English and in Scottish Gaelic. The tune has been performed by the Royal Scots Dragoon Guards, and featured in the album, Spirit of the Glen, which won a Classical Brit award in 2009.[4] The song has been performed at numerous Scottish cultural events, including Scotland's Rugby Union games.[1] The tune was the Royal Hong Kong Police Anthem under British rule which ended in 1997. Lyrics[edit]

Typography Ireland Face Forward is an international peer-reviewed conference focused on typography that seeks to examine design and typographic practice, and to make explicit existing connections between craft, research, theory, history, criticism and pedagogy. This conference aims to provoke informed, rigorous and critical debate on aspects of typographic research and practice that relate to current discourse and contexts. It is the inaugural event in what will become an annual international conference. This year’s conference is supported by ID2015 Year of Irish Design and the Dublin Institute of Technology. In the field of visual communication and typographic practice, a great deal of epistemological uncertainty still exists.

What to put in a sketchbook for beginners by Saskia Keultjes Your sketchbook is a secret place “Ever tried. Ever failed. These 6 Electronic Instruments Go from Retro to Bananas There are all kinds of DIY instruments available for you to experiment with, but electronic instruments have to be some of the craziest. From the Theremin, using radio waves to control pitch and volume, to an instrument controlled, literally, by bananas, the options for “electro-musical” creativity are nearly endless! Circuit Bending Circuit bending could refer to any number of instruments, but it’s the art of hacking an existing electronic instrument or toy into something that sounds, well, different. This video gives a broad introduction to the technique. It’s probably best to start with something inexpensive or that you don’t care about.

- Home Libre Musique, how, why ? The Dogmazic.net musical archive provides more than 55000 music tracks, all of them downloadable freely "totally quietly and totally legally".The musicians who publish on Dogmazic.net all choosed to provide their musique under a free or open license According to the license chosen, many rights can be grandted as-is to listeners. The most permissive license, the CC-BY, allows any kind of use as long as the author and the license are indicated, including commerical uses without any counterpart (which can be useful for a monetized video soundtrack). lab Sticky Thing Touch Sticky Thing iPhone Experiments Space Noodles Liquid Particles 3D The particles trapped in a wormhole discoball. Takes some practice to control. Launch06-2010 Comparison Technical study, comparing rendering performance. Overview04-2010 Liquid Particles

Make your very own Tiny Ukulele This tutorial teaches you how to make the world’s smallest (and probably only) capacitance-piezo-buzzer ukulele. A ukulele is an instrument from Hawaii that looks like a small guitar with four nylon strings. Our strings will be made of wire and work by measuring the capacitance and then play the corresponding tone on a piezo buzzer. The ukulele itself is made of laser cut plywood. This is what the final result will sound like: - Index page It is currently Wed Aug 12, 2020 11:35 am Donate to PianophiliaHelp defray the costs of running the show and improving the site Total redirects: 210213 Total redirects: 210213 Who is online In total there are 17 users online :: 0 registered, 1 hidden and 16 guests (based on users active over the past 5 minutes)Most users ever online was 35 on Sun Jul 19, 2020 3:23 am Statistics

Every Noise at Once traditional irish singing american contemporary classical american 21st century classical brazilian contemporary classical Build a laser show that moves to your favourite music The first thing we want to do is provide power to the laser itself, and provide any easy method to turn it on and off. The power is coming from the AC/DC adapter, but it ends in one of those plugs we're all so familiar with. What we need to do is wire a receptacle (which connects to our power adapter plug), to a switch (which allows us to turn power on and off), which then goes to the laser driver board itself. Don't connect anything to the laser yet!