Nerdy Gurdy – instruments. Soundtronics. Song Maker. MIDI Controller In A Concertina Looks Sea Shanty-Ready. Did you know that the English concertina, that hand-pumped bellows instrument favored by sailors both legitimate and piratical in the Age of Sail, was invented by none other than [Sir Charles Wheatstone]? 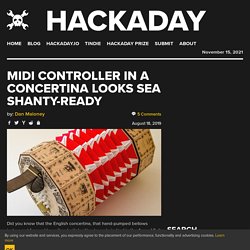 We didn’t, but [Dave Ehnebuske] knew that the venerable English gentleman was tickling the keys of his instrument nearly two decades before experimenting with the bridge circuit that would bear his name. This, however, is not the reason [Dave] built a MIDI controller in the form of an English concertina. Teensy MIDI Air Harp Sounds Huge. Some of the coolest sounds come from wild instruments like orchestra strings, fretless basses, and theremins — instruments that aren’t tied down by the constraints of frets and other kinds of note boundaries. 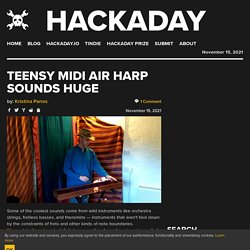 [XenonJohn]’s air harp is definitely among this class of music makers, all of which require a certain level of manual finesse to play well. Although inspired by Jean-Michel Jarre’s laser harp, there are no lasers here. Index. Create.arduino. The story The idea for the realization of this MIDI controller came after seeing what some people could do with softpots, Arduino, and musical instruments together. 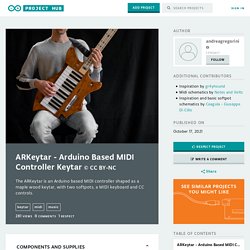 I found that some applications were really interesting. I only found that there was a lack of instruments that were not just trying to emulate a guitar or adding a pitch control to an existing keyboard. So I decided to create an instrument that allows to play with both hands two different sounds on different MIDI channels (like one can do on many synthesizers) but with a very different kind of control with one hand. The aim is not emulating a guitar, but giving the possibility to play virtual or hardware synths in a different but not so drastically new way. In order to make a single instrument capable of delivering these aspects, I chose the shape of a guitar, so to easily handle it both standing and sitting. This project has been realized in my free time and required almost an year of non continuous work. The Result. Open.Theremin V3. Open.Theremin V3 - Next Generation Theremin Open Theremin is an open source hardware and software project with a great community of musicians and people interested in the world of electronic music instruments . 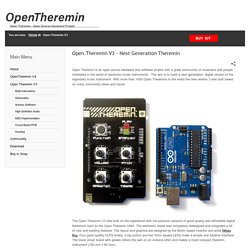 The aim is to build a next generation, digital version of the legendary music instrument. With more than 1000 Open.Theremins in the world the new version 3 was built based on many community ideas and inputs. The Open.Theremin V3 was built on the experience with the previous versions of good quality and affordable digital theremins such as the Open.Theremin.UNO. Join the Gurdy Revolution... - Gateway Gurdy % Hurdy Gurdy for Everyone. Irijule. - Learn & develop your playing skills on the MIDI keyboard with Melodics. Our approach to music education is this - confidence is key: positive reinforcement and building good habits around practice creates a really powerful feedback loop. 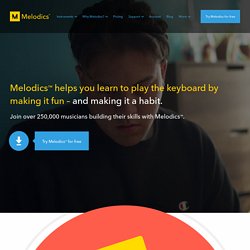 The energy. However – practicing by repeating something over again is still the best way to improve, and that’s as true of learning to play music as it is anything else. GaudiLabs/OpenTheremin_V3: Open Source Theremin Instrument, Arudino Codes. MIDI controller TouchMe – Playtronica. MPC Beats. 22 guitar chords all guitarists need to know. Guitar Skills: We're breaking our 22 chords into three areas – essential beginner guitar chords, folk and blues. 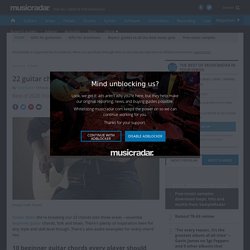 There's plenty of inspiration here for any style and skill level though. There's also audio examples for every chord too. 10 beginner guitar chords every player should start with These are the 10 must-learn chords that every guitarist uses all the time. If you don’t know these chords, learn them right now. Check out the audio examples of how they should sound below the chord boxes too. TKTalkie.com - V2 Tutorial. TKTalkie V2 Tutorial This is a basic version of the TK-Talkie and does NOT include Bluetooth support for mobile app control. 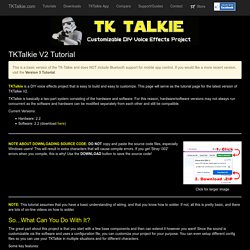 If you would like a more recent version, visit the Version 3 Tutorial. These tutorials are provided so that you can build a TK-Talkie for yourself...you can even build them for your friends. The license that comes with TK-Talkie does prevent the sale of them, however. Teensymoog. Bela: The platform for beautiful interaction. PanGenerator. 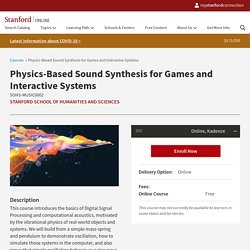 3d Printing Musical Instruments. Back in 2012, I had the opportunity to do a free assignment. 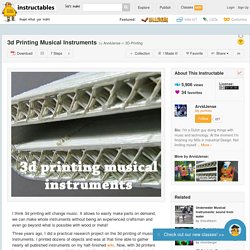 With DIY 3d printers becoming available in my school, I decided to figure out how 3d printers could change musical instruments. I did a long research into 3d printing techniques, which I tried to combine with musical instrument manufacturing techniques. While replication of existing instruments did seem like an option, I was more interested in making completely new instruments. While I had a lot of issues with printing in the first place, I made dozens of experiments. Music Timeline. 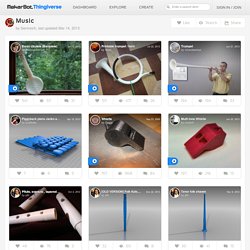 Build a laser show that moves to your favourite music. The first thing we want to do is provide power to the laser itself, and provide any easy method to turn it on and off. The power is coming from the AC/DC adapter, but it ends in one of those plugs we're all so familiar with. What we need to do is wire a receptacle (which connects to our power adapter plug), to a switch (which allows us to turn power on and off), which then goes to the laser driver board itself.

Don't connect anything to the laser yet! Why? We need to mount the switch and the receptacle in the box, and you'll quickly find that you need to pass the wires through the little hole in order to mount the switch. Patchblocks. Audio Sauna - Online Audio Workstation. Mobile-access. Make your very own Tiny Ukulele. This tutorial teaches you how to make the world’s smallest (and probably only) capacitance-piezo-buzzer ukulele. A ukulele is an instrument from Hawaii that looks like a small guitar with four nylon strings. Our strings will be made of wire and work by measuring the capacitance and then play the corresponding tone on a piezo buzzer. Dave Sharples. Mind and music. Center for Computer Research in Music and Acoustics. These 6 Electronic Instruments Go from Retro to Bananas. There are all kinds of DIY instruments available for you to experiment with, but electronic instruments have to be some of the craziest.

From the Theremin, using radio waves to control pitch and volume, to an instrument controlled, literally, by bananas, the options for “electro-musical” creativity are nearly endless! Circuit Bending Circuit bending could refer to any number of instruments, but it’s the art of hacking an existing electronic instrument or toy into something that sounds, well, different. This video gives a broad introduction to the technique. The history of electronic music from 1800 to 2015. Quaver - Analog Looping Piano. Highland Cathedral. Highland Cathedral is a popular melody for the Great Highland Bagpipe. This melody was composed by German musicians Ulrich Roever and Michael Korb[1] in 1982 for a Highland games held in Germany.[2] It has been proposed as the Scottish national anthem to replace unofficial anthems Scotland the Brave and/or Flower of Scotland.[3] It has subsequently undergone various orchestrations and had lyrics added in English and in Scottish Gaelic.

The tune has been performed by the Royal Scots Dragoon Guards, and featured in the album, Spirit of the Glen, which won a Classical Brit award in 2009.[4] The song has been performed at numerous Scottish cultural events, including Scotland's Rugby Union games.[1] The tune was the Royal Hong Kong Police Anthem under British rule which ended in 1997. Lyrics[edit] What is Filk? Singout article. Filk Music by Jordin Kare No, that's not a typographical error (although the word started as one, long ago). Filksongs and filksinging are the folk music of a time and a community, just as, say, Celtic ballads, or new England sea chanteys are — except the time is today (or tomorrow) and the community is science fiction and fantasy fandom.

Filksinging got it's start in the 1950's, when fans of SF (never say sci-fi) and fantasy began holding weekend get-togethers — conventions, or "cons" at rented hotels. Sometimes a few musically inclined fans would gather late at night in a corner of the lobby and trade folk songs, often making up mutant lyrics about space travel or elves or convention-going or what have you.

Overview. HOME. Electric Tenor Guitar : 15 Steps (with Pictures) - Instructables. Evolution has made it so that we are able to close our eyes but not our ears. Consequently, my ears are always perked and on the prowl for new sounds. Often the instruments that produce the sounds I’m after aren’t widely available for purchase (a consequence of having increasingly eccentric taste ) or simply don’t exist. Haken Continuum - ExperimentalSynth.

ContinuuMini — Haken Audio. So from what I can see, correct me if I'm wrong, it is polyphonic but the pitch bend/slide is not? Ghost In Translation. Arduino Vocal Effects Box : 36 Steps (with Pictures) - Instructables. Raspberry Pi Plays A MIDI Tune Wherever You May Roam. Bass Guitar Body V2 by XDr4g0nX. Birds Piano Academy - Learn piano & keyboard online the easy way. Acoustic Lenses Show Sound Can Be Focused Like Light. Software Development and Design. UPISketch 2.0 released. Alf45tar/PedalinoMini: Open source wireless MIDI controller. Introduction to new music-mooc. The second life of a Casio DH-100. The Blade. Nanoloop. Bastl Instruments. Bastl Instruments. DLehenbauer/arduino-midi-sound-module: Turn your Arduino Uno into a 16-voice MIDI sound generator.