Save The Pacific Northwest Tree Octopus 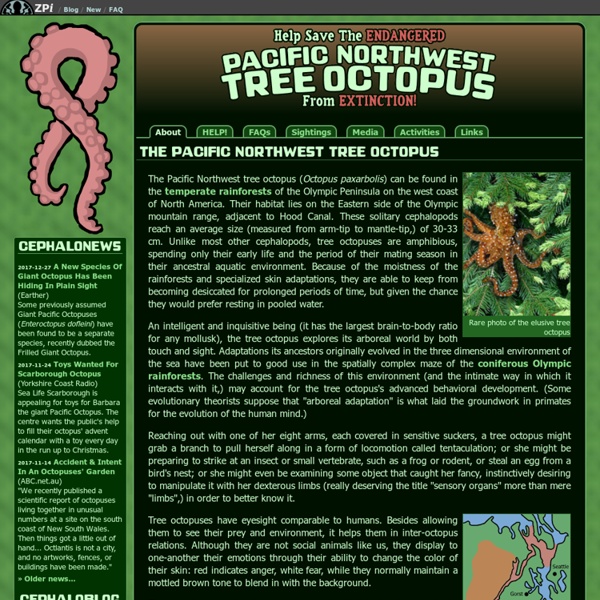 Help Save The ENDANGERED From EXTINCTION! The Pacific Northwest Tree Octopus Rare photo of the elusive tree octopus The Pacific Northwest tree octopus (Octopus paxarbolis) can be found in the temperate rainforests of the Olympic Peninsula on the west coast of North America. Their habitat lies on the Eastern side of the Olympic mountain range, adjacent to Hood Canal. An intelligent and inquisitive being (it has the largest brain-to-body ratio for any mollusk), the tree octopus explores its arboreal world by both touch and sight. Map of estimated tree octopus maximum range, including spawning waters Tree octopuses have eyesight comparable to humans. The reproductive cycle of the tree octopus is still linked to its roots in the waters of the Puget Sound from where it is thought to have originated. Why It's Endangered Tree Octopus hat from 1923(Click to enlarge.) The possibility of Pacific Northwest tree octopus extinction is not an unwarranted fear. How You Can Help More Tree Octopus Information

All About Explorers All About Explorers was developed by a group of teachers as a means of teaching students about the Internet. Although the Internet can be a tremendous resource for gathering information about a topic, we found that students often did not have the skills to discern useful information from worthless data. So we set out to develop a series of lessons for elementary age students in which we would demonstrate that just because it is out there for the searching does not mean it is worthwhile.

Fake News Or Real? How To Self-Check The News And Get The Facts : All Tech Considered Guido Rosa/Getty Images/Ikon Images Fake news stories can have real-life consequences. On Sunday, police said a man with a rifle who claimed to be "self-investigating" a baseless online conspiracy theory entered a Washington, D.C., pizzeria and fired the weapon inside the restaurant. So, yes, fake news is a big problem. Facts About Dihydrogen Monoxide Dihydrogen Monoxide (DHMO) is a colorless and odorless chemical compound, also referred to by some as Dihydrogen Oxide, Hydrogen Hydroxide, Hydronium Hydroxide, or simply Hydric acid. Its basis is the highly reactive hydroxyl radical, a species shown to mutate DNA, denature proteins, disrupt cell membranes, and chemically alter critical neurotransmitters. The atomic components of DHMO are found in a number of caustic, explosive and poisonous compounds such as Sulfuric Acid, Nitroglycerine and Ethyl Alcohol.

30 of the best podcasts in 2017 for curious minds Wilma Podcasts are more popular than ever. Thanks to 2014's podcasting hit Serial everyone who owns a mixing desk and a microphone has started to create their own. Sometimes the choice of what to listen to can be overwhelming. To help you out here's WIRED's guide to the podcasts you should be listening to. Don’t Believe Everything You Hear or Read Mars Peopled by One Vast Thinking Vegetable! Salt Lake Tribune, October 13, 1912 In the most recent “Right to the Source” column in NSTA’s magazine The Science Teacher, Michael Apfeldorf discusses reactions in the early 20th century to reports of life on Mars. He explains that as early as 1894, scientists noted that conditions on Mars would not support life, but wild theories persisted in popular media. That reminded us of the Library’s many April Fools’ Day posts featuring primary sources that should not be taken at face value.

Fake News - Resources from Harvard Skip to main content Fake News, Misinformation, and Propaganda This page provides background information, links, and tools from outside organizations to help guide users in navigating potential fake news A Visual Take Cyberbullying guidance for schools Cyberbullying: Understand, Prevent and Respond Guidance for Schools Cyberbullying is a form of bullying, and research reveals it has increased to affect 12% of young people in this country. This Guidance is designed to support schools in preventing and responding to cyberbullying. The Guidance comprises of four main sections below.

Fake sites 1 Introduction to fake websites Librarians and educators need to be able to illustrate to students and users alike that websites cannot always be trusted to provide truthful and accurate data. This page provides examples of websites that are full of lies, inaccuracies or false information - either for amusement or for more worrying reasons. Lesson Idea: Media Literacy and Fake News Overview: In a world filled with rapid pace communication through a variety of platforms, we have an abundance of information available at our fingertips. Discerning fact from fiction can be complex. How To Spot Fake News Critical thinking is a key skill in media and information literacy, and the mission of libraries is to educate and advocate its importance. Discussions about fake news has led to a new focus on media literacy more broadly, and the role of libraries and other education institutions in providing this. When Oxford Dictionaries announced post-truth was Word of the Year 2016, we as librarians realise action is needed to educate and advocate for critical thinking – a crucial skill when navigating the information society. IFLA has made this infographic with eight simple steps (based on FactCheck.org’s 2016 article How to Spot Fake News) to discover the verifiability of a given news-piece in front of you. Download, print, translate, and share – at home, at your library, in your local community, and on social media networks.

Fake sites 2 Introduction to fake websites Librarians and educators need to be able to illustrate to students and users alike that websites cannot always be trusted to provide truthful and accurate data. This page provides examples of websites that are full of lies, inaccuracies or false information - either for amusement or for more worrying reasons. The list does not include phishing sites however; these are intended to fool a person into believing that they are visiting a legitimate bank site for example; there are already plenty of links to these online already. Fake websites - scientific and commercial All of the following websites are, to the best of my knowledge fake sites, spoof sites or parodies of 'real' sites.

A Closer Look: Beware of Photos Bearing False Captions When working with historical photo collections, it always pays to ask yourself: Does the title match the content? The original photographers sometimes mixed up dates and places, or misspelled words and omitted key info — just like you or I might. Glancing at this pair of photographs, they seem to show the same scene. But the titles etched into the original glass negatives tell conflicting stories. (Spoiler alert: Don’t click on the photos to see their catalog records yet or you’ll get the answer early!) Original caption: Suffragettes, Union Sq., May 2, 1914.

A Guide to Fake News Websites Satire is a venerable form of social commentary that uses humor to ridicule human vices and follies. The Internet is rife with it, especially news satire, or fake news, in which fictionalized accounts of current events are presented in mock-journalistic style to lampoon politicians, celebrities, and social mores. Satire is only effective if people recognize it as such, however, and therein lies a major pitfall of publishing fake news on the Internet. Users tend to skim texts instead of reading them, missing important clues and disclaimers. Share a heart On 9th February 2016 we’re encouraging everyone to play their part and #shareaheart for Safer Internet Day! We are using the heart, a universal sign for love, to promote respect and kindness online this Safer Internet Day. To help us spread the love, we want schools, organisations and individuals to take to social media and share their own heart filled messages, images or videos using the hashtag #shareaheart. Whether it’s a positive message in our specially designed heart signs, a post filled with heart emojis, or something more creative, there are lots of ways you can get involved in the #shareaheart campaign. Fill our heart with your own message and share it on social media: