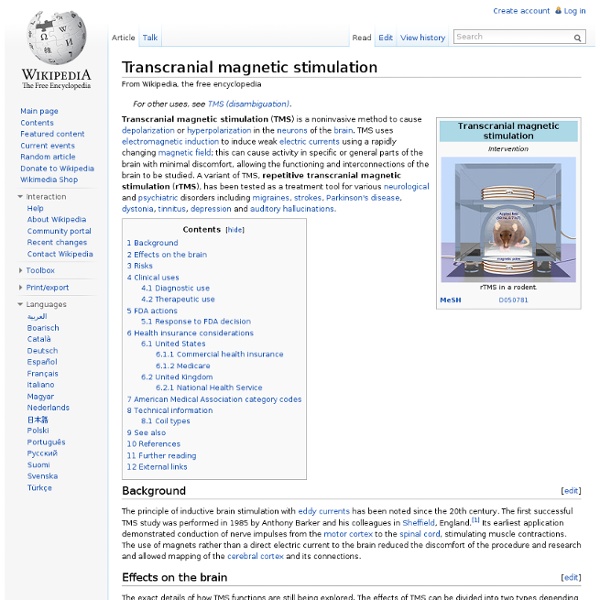 Background[edit] Early attempts at stimulation of the brain using a magnetic field included those, in 1910, of Silvanus P. Thompson in London.[2] The principle of inductive brain stimulation with eddy currents has been noted since the 20th century. The first successful TMS study was performed in 1985 by Anthony Barker and his colleagues at the Royal Hallamshire Hospital in Sheffield, England.[3] Its earliest application demonstrated conduction of nerve impulses from the motor cortex to the spinal cord, stimulating muscle contractions in the hand. Theory[edit] From the Biot–Savart law it has been shown that a current through a wire generates a magnetic field around that wire. This electric field causes a change in the transmembrane current of the neuron, which leads to the depolarization or hyperpolarization of the neuron and the firing of an action potential.[5] Effects on the brain[edit] The exact details of how TMS functions are still being explored. Risks[edit] Clinical uses[edit] Related:  Conceptual

Learn more quickly by transcranial magnetic brain stimulation, study in rats suggests What sounds like science fiction is actually possible: thanks to magnetic stimulation, the activity of certain brain nerve cells can be deliberately influenced. What happens in the brain in this context has been unclear up to now. Medical experts from Bochum under the leadership of Prof. The researchers have published their studies in the Journal of Neuroscience and in the European Journal of Neuroscience. Magnetic pulses stimulate the brain Transcranial magnetic stimulation (TMS) is a relatively new method of pain-free stimulation of cerebral nerve cells. Repeated stimuli change cerebral activity Since the mid-1990's, repetitive TMS has been used to make purposeful changes to the activability of nerve cells in the human cortex: "In general, the activity of the cells drops as a result of a low-frequency stimulation, i.e. with one magnetic pulse per second. Contact points between cells are strengthened or weakened Inhibitory cortical cells react particularly sensitive to stimulation

Broken windows theory The broken windows theory is a criminological theory of the norm-setting and signalling effect of urban disorder and vandalism on additional crime and anti-social behavior. The theory states that maintaining and monitoring urban environments in a well-ordered condition may stop further vandalism and escalation into more serious crime. The theory was introduced in a 1982 article by social scientists James Q. Wilson and George L. Kelling. Since then it has been subject to great debate both within the social sciences and the public sphere. Article and crime prevention[edit] The broken windows theory was first introduced by social scientists James Q. Consider a building with a few broken windows. Before the introduction of this theory by Wilson and Kelling, Philip Zimbardo, a Stanford psychologist, arranged an experiment testing the broken-window theory in 1969. The article received a great deal of attention and was very widely cited. Informal social controls[edit] Concept of "Fear"[edit]

Neuroscience, free will and determinism: 'I'm just a machine' What does this mean in terms of free will? "We don't have free will, in the spiritual sense. What you're seeing is the last output stage of a machine. The conclusions are shocking: if we are part of the universe, and obey its laws, it's hard to see where free will comes into it. "If you see a light go green, it may mean press the accelerator; but there are lots of situations where it doesn't mean that: if the car in front hasn't moved, for example. Slowly, however, we are learning more about the details of that complexity. "What happens if someone commits a crime, and it turns out that there's a lesion in that brain area? This runs shockingly contrary to the sense of freedom that we feel in terms of controlling our actions, on which we base our whole sense of self and system of morality. "It's a rule that we need to have as social animals. Maybe, I suggest, we've over-defined free will. "Yes, interacting intelligently with your environment might be enough. Prof Haggard is dismissive.

Net neutrality Net neutrality (also network neutrality or Internet neutrality) is the principle that Internet service providers and governments should treat all data on the Internet equally, not discriminating or charging differentially by user, content, site, platform, application, type of attached equipment, and modes of communication. The term was coined by Columbia media law professor Tim Wu.[1][2][3][4] The term "net neutrality" is vague and confusing to many. Another accepted description is "open internet" where you can use your internet connection for anything you wish at no additional charge and with no restrictions—this would be a net neutral environment. There has been extensive debate about whether net neutrality should be required by law. Neutrality proponents claim that telecom companies seek to impose a tiered service model in order to control the pipeline and thereby remove competition, create artificial scarcity, and oblige subscribers to buy their otherwise uncompetitive services.

Magnetic Mind Control How Does the Brain Work? PBS Airdate: September 14, 2011 NEIL DEGRASSE TYSON: Hi, I'm Neil deGrasse Tyson, your host for NOVA scienceNOW, where this season, we're asking six big questions. On this episode: How Does the Brain Work? To find out, I head to Las Vegas, where brain researchers are placing their bets on magic. MAC KING (Magician): That's a dang real fish. NEIL DEGRASSE TYSON: Some of the world's top magicians... PENN JILLETTE (Magician): Place the ball... NEIL DEGRASSE TYSON: ...are making the mysteries behind our most powerful organ disappear... I saw it go over! The illusionists reveal their secrets That motion will draw the eye ...giving us new insight into how our brain pays attention. STEPHEN MACKNIK (Barrow Neurological Institute): This would be a major contribution to science from the magicians. NEIL DEGRASSE TYSON: Also, a magnetic wand ... MO ROCCA (Correspondent): Oh! NEIL DEGRASSE TYSON: ... that can control your body,... MO ROCCA: Ooh, wow! Keep your eye on the ball, son. Maria?

Don’t try this at home: Researchers use tDCS to release your brain’s strongest opioid painkillers A team of international researchers headed up by the University of Michigan has used noninvasive transcranial direct current stimulation (tDCS) to release endogenous opioids — the human body’s most powerful, euphoria-inducing painkillers that are very similar to opiates such as morphine. This approach is significant because releasing these opioids is as simple as strapping a couple of damp sponges to your scalp and attaching a 9-volt battery. tDCS is a new application of neuroscience that is frankly a little bit scary. Basically, by applying a very small current to your scalp (2 milliamps), you can alter the behavior of neurons in your brain. Pain relief from tDCS. Now, it seems, researchers — led by Alexandre DaSilva of the University of Michigian — have found that tDCS, when the electrodes are placed above the motor cortex, releases endogenous μ-opioid. Now read: Curing depression and super-charging cranial capacity with deep brain stimulation

How to Burst the "Filter Bubble" that Protects Us from Opposing Views The term “filter bubble” entered the public domain back in 2011when the internet activist Eli Pariser coined it to refer to the way recommendation engines shield people from certain aspects of the real world. Pariser used the example of two people who googled the term “BP”. One received links to investment news about BP while the other received links to the Deepwater Horizon oil spill, presumably as a result of some recommendation algorithm. This is an insidious problem. This is the filter bubble—being surrounded only by people you like and content that you agree with. And the danger is that it can polarise populations creating potentially harmful divisions in society. Today, Eduardo Graells-Garrido at the Universitat Pompeu Fabra in Barcelona as well as Mounia Lalmas and Daniel Quercia, both at Yahoo Labs, say they’ve hit on a way to burst the filter bubble. They found over 40,000 Twitter users who had expressed an opinion using the hashtags such as #pro-life and #pro-choice.

Chilling effect In a legal context, a chilling effect is the inhibition or discouragement of the legitimate exercise of natural and legal rights by the threat of legal sanction.[1] The right that is most often described as being suppressed by a chilling effect is the US constitutional right to free speech. A chilling effect may be caused by legal actions such as the passing of a law, the decision of a court, or the threat of a lawsuit; any legal action that would cause people to hesitate to exercise a legitimate right (freedom of speech or otherwise) for fear of legal repercussions. When that fear is brought about by the threat of a libel lawsuit, it is called libel chill.[2] A lawsuit initiated specifically for the purpose of creating a chilling effect may be called a Strategic Lawsuit Against Public Participation, or more commonly called; a "SLAPP suit." "Chilling" in this context normally implies an undesirable slowing. Usage[edit] History[edit] See also[edit] References[edit] External links[edit]