Secularism. Secularism draws its intellectual roots from Greek and Roman philosophers such as Marcus Aurelius and Epicurus; from Enlightenment thinkers such as Denis Diderot, Voltaire, Baruch Spinoza, James Madison, Thomas Jefferson, and Thomas Paine; and from more recent freethinkers and atheists such as Robert Ingersoll and Bertrand Russell. 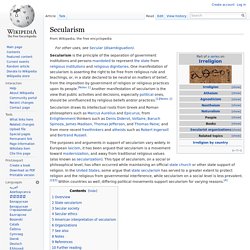 The purposes and arguments in support of secularism vary widely. In European laicism, it has been argued that secularism is a movement toward modernization, and away from traditional religious values (also known as secularization). This type of secularism, on a social or philosophical level, has often occurred while maintaining an official state church or other state support of religion. Overview[edit] The term "secularism" was first used by the British writer George Jacob Holyoake in 1851.[5] Although the term was new, the general notions of freethought on which it was based had existed throughout history. 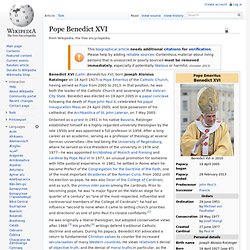 The building still stands today. Ratzinger and his brother Georg entered Saint Michael Seminary in Traunstein in November 1945, later studying at the Ducal Georgianum (Herzogliches Georgianum) of the Ludwig-Maximilian University in Munich. They were both ordained in Freising on 29 June 1951 by Cardinal Michael von Faulhaber of Munich. Ratzinger recalled: ...at the moment the elderly Archbishop laid his hands on me, a little bird – perhaps a lark – flew up from the altar in the high cathedral and trilled a little joyful song.[21] Ratzinger's 1953 dissertation was on St.

Pre-papal career Academic career: 1951–77. Pope Francis. Pope Francis (Latin: Franciscus; Italian: Francesco; born Jorge Mario Bergoglio,[b][c] 17 December 1936) is the reigning pope of the Catholic Church, in which capacity he is both Bishop of Rome and absolute sovereign of the Vatican City State.[2] Following the resignation of Pope Benedict XVI on 28 February 2013, a papal conclave elected Bergoglio as his successor on 13 March. 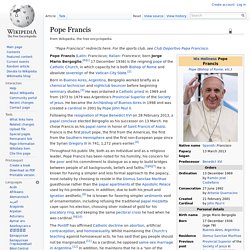 Is Pope Francis Laying The Groundwork For A One World Religion? Does Pope Francis intend to help the global elite achieve their goal of uniting all of the religions of the world under a single banner? 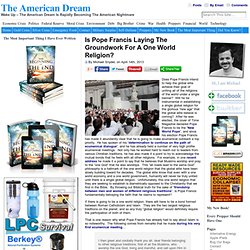 Will he be instrumental in establishing a single global religion for the glorious “new age” that the global elite believe is coming? After he was elected, the cover of Time Magazine declared Pope Francis to be the “New World Pope“, and since his election Pope Francis has made it abundantly clear that he is going to make ecumenical outreach a top priority. He has spoken of his “determination to continue on the path of ecumenical dialogue“, and he has already held a number of very high profile ecumenical meetings.

Not only has he worked hard to reach out to leaders from various Christian traditions, he has also made it a point to try to acknowledge the mutual bonds that he feels with all other religions. For example, in one recent address he made it a point to say that he believes that Muslims worship and pray to the “one God” that he also worships. Major religious groups. The world's principal religions and spiritual traditions may be classified into a small number of major groups, although this is by no means a uniform practice. 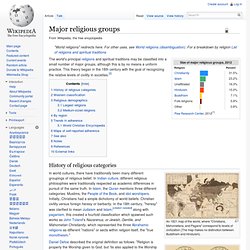 Buddhism. Buddhism (pronunciation: /ˈbʊdɪzəm/ or /ˈbuːdɪzəm/) is a religion[3] and dharma that encompasses a variety of traditions, beliefs and spiritual practices largely based on teachings attributed to the Buddha. 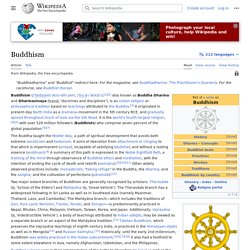 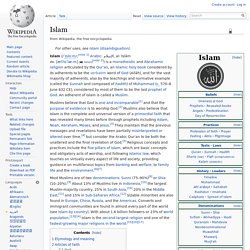 An adherent of Islam is called a Muslim. Most Muslims are of two denominations: Sunni (75–90%)[8] or Shia (10–20%).[9] About 13% of Muslims live in Indonesia,[10] the largest Muslim-majority country, 25% in South Asia,[10] 20% in the Middle East,[11] and 15% in Sub-Saharan Africa.[12] Sizable minorities are also found in Europe, China, Russia, and the Americas. Christianity. Christianity is an Abrahamic religion that began as a Jewish sect in the mid-1st century.[9][10] Originating in the Levant region of the Middle East, it quickly spread to Syria, Mesopotamia, Asia Minor and Egypt. It grew in size and influence over a few centuries, and by the end of the 4th century had become the official state church of the Roman Empire, replacing other forms of religion practiced under Roman rule.[11] During the Middle Ages, most of the remainder of Europe was Christianized, and adherents were gained in the Middle East, North Africa, Ethiopia and parts of India.[12][13] Following the Age of Discovery, Christianity spread to the Americas, Australasia, sub-Saharan Africa, and the rest of the world through missionary work and colonization.[14][15][16] Christianity has played a prominent role in the shaping of Western civilization.[17][18][19][20][21] Beliefs Creeds Its main points include: Ten Commandments These are quotes from Deuteronomy 6:4 and Leviticus 19:18.

Hinduism. Hinduism is the dominant religion, or way of life,[note 1] in South Asia, most notably India. 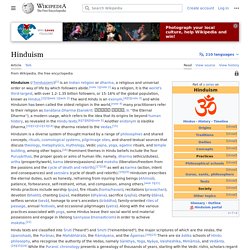 It includes Shaivism, Vaishnavism and Shaktism among numerous other traditions, and a wide spectrum of laws and prescriptions of "daily morality" based on karma, dharma, and societal norms. Aquarius - The Age Of Evil (Full Movie)