Hormonal Changes Affect Female Athletic Performance. Period. – PR News. Over the past year, several notable female athletes have publically discussed the impact of their menstrual cycles on athletic performance: at the 2016 Summer Olympics, a swimmer from China remarked that her race was impacted by having her period because she felt tired and weak; again at the Australian Open, a British tennis player cited “girl things” as a reason she was feeling fatigued during competition; and just last month USA gymnast Aly Raisman discussed the impact of her period on competition in a Cosmopolitanstory after she participated in a string of advertisements for a brand of tampons geared toward female athletes. 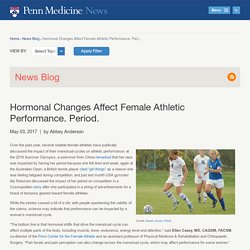 While the stories caused a bit of a stir, with people questioning the validity of the claims, science may indicate that performance can be impacted by a woman’s menstrual cycle. The Menstrual Cycle and Oral Contraceptives It seems as though perceptions of performance changes for female athletes may be a bit more common that one might think. “Knowledge is power. How to prevent ACL injuries in female athletes - Boston Children's Discoveries. ACL Injuries in Young Athletes. By: Sigrid F. 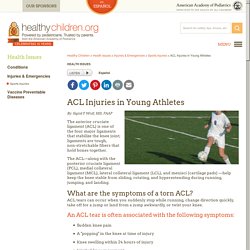 Wolf, MD, FAAP The anterior cruciate ligament (ACL) is one of the four major ligaments that stabilize the knee joint; ligaments are tough, non-stretchable fibers that hold bones together. The ACL—along with the posterior cruciate ligament (PCL), medial collateral ligament (MCL), lateral collateral ligament (LCL), and menisci (cartilage pads) —help keep the knee stable from sliding, rotating, and hyperextending during running, jumping, and landing. ACL TEARS IN THE FEMALE ATHLETE: TRAIN IT OR SPRAIN IT. Why are female soccer players more likely to have an ACL rupture? - Quay Health. By Sydney CBD Osteopath Dr Abbey Davidson It is scary to think that females are up to 8 times more likely to have a non-contact ACL injury than males. 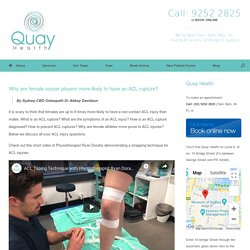 Women in football and ACL injuries. Optimizing Training Around Your Menstrual Cycle. As women in the sports and fitness world, sometimes it can feel like we have something to prove — that we can train, grow, and recover with the rest of 'em. 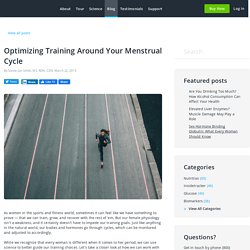 But our female physiology isn't a weakness, and it certainly doesn't have to impede our training goals. Just like anything in the natural world, our bodies and hormones go through cycles, which can be monitored and adjusted to accordingly. While we recognize that every woman is different when it comes to her period, we can use science to better guide our training choices. Let's take a closer look at how we can work with our bodies instead of against them in the gym. First, some cycle basics. - The Washington Post. Dr Matthew Hutchinson - Hip, Knee and Ankle Surgeon Adelaide. England's Jordan Nobbs calls for research into ACL injuries and menstrual cycle - BBC Sport. Women's World Cup Success and ACL Injury Strife. For the past month, the FIFA Women’s World Cup has taken place in France, played out in front of packed stadiums with a carnival atmosphere and with record TV audiences here in the UK. 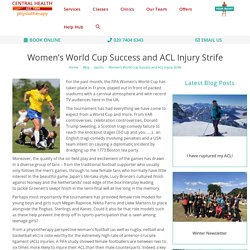 The tournament has had everything we have come to expect from a World Cup and more. From VAR controversies, celebration controversies, Donald Trump tweeting, a Scottish tragi-comedy failure to reach the knockout stages (3-0 up and you …..), an English tragi-comedy involving penalties and a USA team intent on causing a diplomatic incident by dredging up the 1773 Boston tea party.

Moreover, the quality of the on field play and excitement of the games has drawn in a diverse group of fans – from the traditional football supporter who usually only follows the men’s games, through to new female fans who normally have little interest in the beautiful game. ACL Injuries in the Female Athlete - Causes, Impacts, and Conditioning Programs. Frank R. 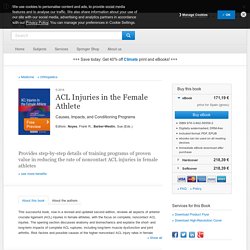 Noyes, MD is the founder and CEO of the Cincinnati SportsMedicine and Orthopaedic Center and the President and Medical Director of the Noyes Knee Institute in Cincinnati, Ohio. Prior to founding the Center, Dr. Noyes was Director of the Sports Medicine Institute and was a Professor in the Department of Orthopaedic Surgery at the University of Cincinnati. Dr. ACL Tears in Female Athletes. Preventing ACL Tears - Why Are ACL Tears More Common In Female Athletes? The story is all too familiar, a promising young athlete lands awkwardly in a game, hears a "Pop" followed by sudden pain and development of swelling. 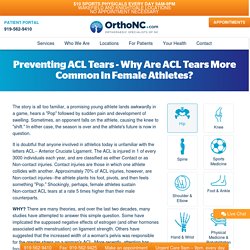 Sometimes, an opponent falls on the athlete, causing the knee to "shift. " In either case, the season is over and the athlete's future is now in question. James Ilic - Wakefield Sports Clinic. ACL INJURIES: Why Female Soccer Players Are At Greater Risk & What You Can Do. ACL Injuries & Females The risk that females have of injuring their Anterior Cruciate Ligament (ACL) will always be of concern no matter if you are a player, coach or spectator of the game. 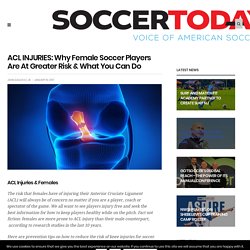 We all want to see players injury free and seek the best information for how to keep players healthy while on the pitch. Fact not fiction: females are more prone to ACL injury than their male counterpart, according to research studies in the last 10 years. Here are prevention tips on how to reduce the risk of knee injuries for soccer players from John Gallucci Jr., MLS Medical Coordinator and medical analyst for coverage of the 2015 FIFA Women’s World Cup.

The prevalence of Anterior Cruciate Ligament tears in athletics has become an epidemic, especially when we are talking about the female athlete population. But why do females suffer close to 10 times more ACL injuries than males? Gale - Product Login. Our physiotherapy team in West Beach Adelaide. The Scary Reasons Women Are More Likely to Tear Their ACLs - Shape Magazine. Bad news, ladies: Women who participate in jumping and pivoting sports are four to six times more likely to tear their ACLs than men in the same sports, according to a 2010 study published in the North American Journal of Sports Physical Therapy. 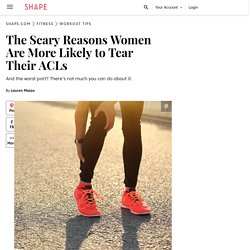 The worst part, however, is that there's not a ton we can do about it. Naturally, we wanted to know all the details, so we chatted with Armin Tehrany, M.D., an orthopedic surgeon and shoulder and knee specialist and founder of Manhattan Orthopedic Care. He told us exactly why women are at a higher risk for tearing their anterior cruciate ligament (ACL) and how to keep it right where it's supposed to be. Your Anatomy Your hips don't lie; they can have a serious effect on your risk of tearing an ACL. Jason Collins. Jason is a Titled APA Sports and Exercise Physiotherapist, who has worked in private practice since graduating with a Bachelor of Physiotherapy in 2007, and he then joined Physioactive in 2016. 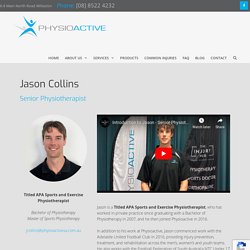 In addition to his work at Physioactive, Jason commenced work with the Adelaide United Football Club in 2016, providing injury prevention, treatment, and rehabilitation across the men’s, women’s and youth teams. He also works with the Football Federation of South Australia NTC Under 17 girls team, and has previously been involved with state level junior Rugby Union and Cricket teams.

AFLW players are 9.2 times more likely to injure their knees than male players. Here's why. Analysis Updated 6 Mar 2019, 12:31amWed 6 Mar 2019, 12:31am When Isabel Huntington kicked truly for the Western Bulldogs at Fremantle Oval on Sunday night, she was mobbed by a group of team-mates who understood just how difficult her journey back to the field has been.