Trade union members did not shape the Labour leadership result as much as in ... Following changes to the Labour leadership election procedures under Ed Miliband, critics claimed that this election would be swamped by affiliated members from the trade unions who could opt in to get a ballot (unlike the old system in which they were capped at a one third share). 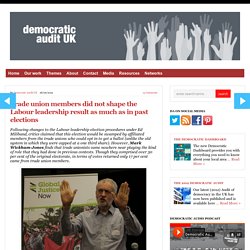 However, Mark Wickham-Jones finds that trade unionists came nowhere near playing the kind of role that they had done in previous contests. Though they comprised over 30 per cent of the original electorate, in terms of votes returned only 17 per cent came from trade union members. What role did the party’s affiliated trade unionists play in the contest to choose Labour’s new leader? The Corbyn Effect. Corbyn wins – Corbyn’s Cabinet – Media reaction – So, after allowing some of the dust to settle after the results on Saturday, it is time to look to the meaning of the Corbyn result for politics students. 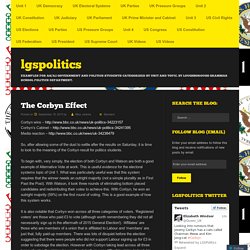 To begin with, very simply, the election of both Corbyn and Watson are both a good example of Alternative Vote at work. This is useful evidence for the electoral systems topic of Unit 1. What was particularly useful was that this system requires that the winner needs an outright majority (not a simple plurality as in First Past the Post). With Watson, it took three rounds of eliminating bottom placed candidates and redistributing their votes to achieve this. It is also notable that Corbyn won across all three categories of voters. The media attention that the leadership election gained fuelled Labour membership numbers and over 500,000 people were eligible to vote in this election. Finally, to ideology. Leftist Jeremy Corbyn elected leader of Britain’s Labour Party. 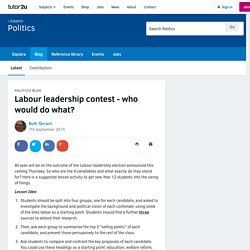 So who are the 4 candidates and what exactly do they stand for? Here is a suggested lesson activity to get new Year 12 students into the swing of things. Lesson Idea Students should be split into four groups, one for each candidate, and asked to investigate the background and political vision of each contender, using some of the links below as a starting point. Students should find a further three sources to extend their research. Andy Burnham First up, Andy Burnham. Yvette Cooper Next, we have Yvette Cooper. How do you vote in Labour's leadership election? Labour use the alternative vote - a preferential voting system where, instead of putting a "x" in a ballot paper, voters rank candidates in order of preference. 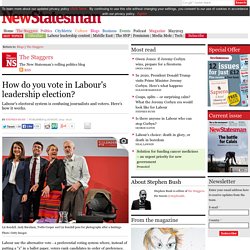 To win, you need a majority of votes cast - so half the number, plus one. (Our model electorate has 100 voters - so 51.) Here's what the ballot paper of our example voter - let's call her Ramsay Blair - looks like: Ramsay has used all four of her preferences, although she doesn't need to: if she felt very passionately about Kendall, she could just vote Kendall 1 and be done with it. Or if she only wanted a woman, she could give Yvette Cooper her second preference. Anyway, on to the voting itself. Why smart Tories should not be smug about Labour’s Corbyn-mania.

“In an age when authenticity is increasingly valued by voters, he walks tall”: the tribute was paid by Andrew Mitchell, former cabinet minister and Conservative whip, one-time director at Lazard and officer in the Royal Tank Regiment. 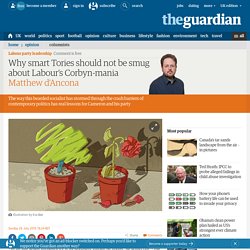 But who is this colossus of whom he speaks? Jeremy Corbyn, that’s who. You may be inclined to suspect Mitchell of ulterior motives; of psychological gamesmanship, encouraging the opposition to choose a leader who is, in fact, unelectable. But Mitchell’s admiration for Corbyn is genuine. They have been friends for many years, and, along with David Davis and Andy Slaughter, went to Washington DC in May to lobby for the immediate release of Shaker Aamer, a British resident – and detainee at Guantánamo Bay since 2002.

How will the leadership race finish? Four paths to victory. This piece is probably going to please precisely no one. 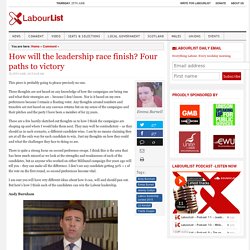 They may well be contradictory – as they should as in each scenario, a different candidate wins. There is quite a strong focus on second preference swaps. I am sure you will have very different ideas about how it can, will and should pan out. Andy Burnham Andy Burnham is currently the front runner and likely to get the most first preference votes. Labour leadership nominations breakdown - MattSmithEtc. Find the full dataset here, or at the bottom of this page. 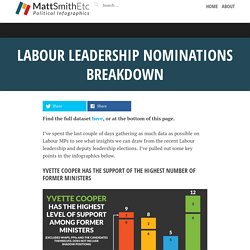 I’ve spent the last couple of days gathering as much data as possible on Labour MPs to see what insights we can draw from the recent Labour leadership and deputy leadership elections. I’ve pulled out some key points in the infographics below.