Irish Culture & Customs of Ireland - Irish Traditions, Folklore, Recipes & History. Donegal Town Tourism: 26 Things to Do in Donegal Town, Ireland. Ireland in the Movies. Whether you are planning a holiday or just interested in Ireland in general, movies can be a great way to explore the country from your armchair. 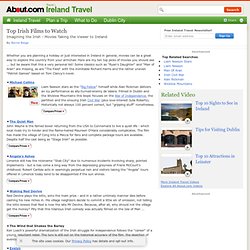 Here are my ten top picks of movies you should see ... but be aware that this a very personal list! Some classics such as "Ryan's Daughter" and "Man of Aran" are missing, as are "The Field" with the inimitable Richard Harris and the rather uneven "Patriot Games" based on Tom Clancy's novel. Michael Collins Liam Neeson stars as the "Big Fellow" himself while Alan Rickman delivers an icy performance as ally-turned-enemy de Valera. Filmed in Dublin and the Wicklow Mountains this biopic focuses on the War of Independence, the partition and the ensuing Irish Civil War (plus love-interest Julia Roberts).

Tourist attractions in Ireland – Giant’s Causeway. History of the Irish Language - Údarás na Gaeltachta.avi. Vacations in Ireland – Official Vacation Website of Tourism Ireland. Irish Customs, Food and Fun Folklore for Your Family Reunion - CustomInk. Celebrating culture and heritage is plenty of fun for Irish families when they get together for a family reunion. 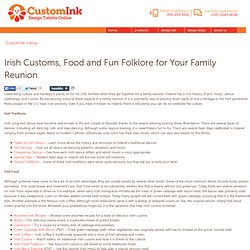 Ireland has a rich history of arts, music, dance, mythology, and cuisine. By introducing some of these aspects in a family reunion, it is a wonderful way of passing down parts of one’s heritage to the next generation. Many people in the U.S. have Irish ancestry. Even if you have not been to Ireland, there is still plenty you can do to celebrate the culture. Irish Traditions Irish song and dance have become well-known in the last couple of decades thanks to the award-winning touring show, Riverdance. Irish Food Although potatoes have come to be a bit of an Irish stereotype, they are usually joined by several other foods. Irish culture, traditions, customs of ireland that live on. Authentic video in the classroom: Ireland I. What you see here is an approximately 3-minute clip from a 50-minute travel video on Ireland. 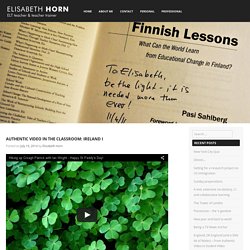 It is authentic, in the sense that it’s intended for English-speaking people interested in travelling and other countries, not for language learners per se. “Ireland” is one of many videos in the Globetrekker series produced by UK-based Pilot Productions. The series is based on the concept of having a travel guide touring a specific country, experiencing cultural highlights, meeting local people and basically learning about the country together with the viewer. The “guide” is not the expert here, the experts are the locals, and the viewer travels the country in the “guise” of the guide, which makes the videos quite entertaining and exciting – and ideal for the language classroom.

There is hardly any language classroom without the use of videos at one time or another. What activities are used in connection with video-clips in class? Quite a lot it would seem. Post-video phase 2 – Debriefing 1. Authentic video in the classroom: Ireland II. My second example of utilising authentic video in the EFL classroom is based on the same 50-minute travel video as my first. 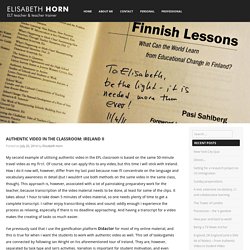 Of course, one can apply this to any video, but this time I will stick with Ireland. How I do it now will, however, differ from my last post because now I’ll concentrate on the language and vocabulary awareness in detail (but I wouldn’t use both methods on the same video in the same class, though). This approach is, however, associated with a lot of painstaking preparatory work for the teacher, because transcription of the video material needs to be done, at least for some of the clips. It takes about 1 hour to take down 5 minutes of video material, so one needs plenty of time to get a complete transcript. I rather enjoy transcribing videos and sound; oddly enough I experience the process as relaxing, especially if there is no deadline approaching. The “game board” that the students start out with looks like this: 1. 2. 3.