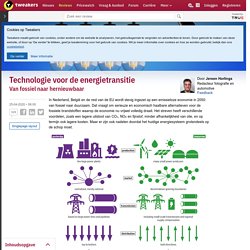 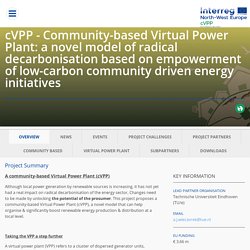 This project proposes a community-based Virtual Power Plant (cVPP), a novel model that can help organise & significantly boost renewable energy production & distribution at a local level. Taking the VPP a step further. 160602151837. The days of drilling into the ground in the search for fuel may be numbered, because if Daniel Nocera has his way, it'll just be a matter of looking for sunny skies. 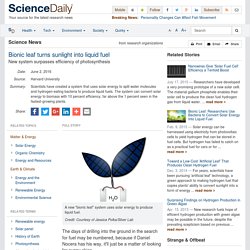 Nocera, the Patterson Rockwood Professor of Energy at Harvard University, and Pamela Silver, the Elliott T. and Onie H. Adams Professor of Biochemistry and Systems Biology at Harvard Medical School, have co-created a system that uses solar energy to split water molecules and hydrogen-eating bacteria to produce liquid fuels. The paper, whose lead authors include post-doctoral fellow Chong Liu and graduate student Brendan Colón, is described in a June 3 paper published in Science. "This is a true artificial photosynthesis system," Nocera said.

Elektriciteit. Verwarming. How do the products work? - SolTech Energy. SolTech has a patented solution to integrate a solar energy system with a roof. 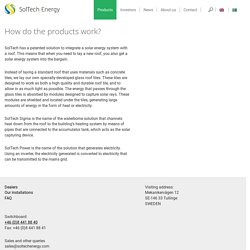 This means that when you need to lay a new roof, you also get a solar energy system into the bargain. Instead of laying a standard roof that uses materials such as concrete tiles, we lay our own specially-developed glass roof tiles. These tiles are designed to work as both a high quality and durable roof tile, and to allow in as much light as possible.

The energy that passes through the glass tiles is absorbed by modules designed to capture solar rays. These modules are shielded and located under the tiles, generating large amounts of energy in the form of heat or electricity. SolTech Sigma is the name of the waterborne solution that channels heat down from the roof to the building’s heating system by means of pipes that are connected to the accumulator tank, which acts as the solar capturing device. SolTech Power is the name of the solution that generates electricity. Gasrekening naar nul : Solarfreezer. Flukso. Wen. Starting a Solar Cooperative Teach-in. Low-cost hybrid solar panel captures four times the energy of conventional panels. Welcome to OTHERPOWER.COM. 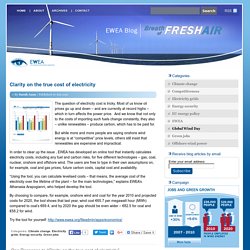 Most of us know oil prices go up and down – and are currently at record highs – which in turn affects the power price. And we know that not only to the costs of importing such fuels change constantly, they also – unlike renewables – produce carbon, which has to be paid for. But while more and more people are saying onshore wind energy is at “competitive” price levels, others still insist that renewables are expensive and impractical. In order to clear up the issue , EWEA has developed an online tool that instantly calculates electricity costs, including any fuel and carbon risks, for five different technologies – gas, coal, nuclear, onshore and offshore wind. The users are free to type in their own assumptions on, for example, coal and gas prices, future carbon costs, capital cost and availability. Try the tool for yourself: Fossil fuels are way more expensive than you think. A new paper published in Climatic Change estimates that when we account for the pollution costs associated with our energy sources, gasoline costs an extra $3.80 per gallon, diesel an additional $4.80 per gallon, coal a further 24 cents per kilowatt-hour, and natural gas another 11 cents per kilowatt-hour that we don’t see in our fuel or energy bills. 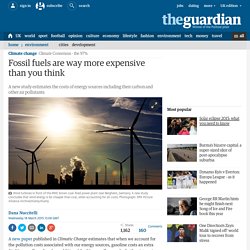 The study was done by Drew Shindell, formerly of Nasa, now professor of climate sciences at Duke University, and Chair of the Scientific Advisory Panel to the Climate and Clean Air Coalition. Shindell recently published research noting that aerosols and ozone have a bigger effect on the climate in the northern hemisphere, where humans produce more of those pollutants. That research led Shindell to question current estimates of the true costs of our energy sources. But Shindell also estimates that carbon emissions are relatively cheap compared to other fossil fuel air pollutants. Electric Cars Cheaper than Gasoline Powered. Urine Powered Generator Produces Electricity For 6 Hours on 1 Liter of Pee: Power Your Home With Waste. Imagine powering your home with waste bi-products. 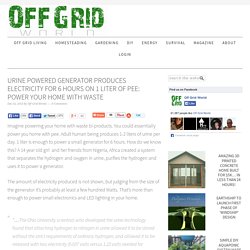 You could essentially power you home with pee. Adult human being produces 1-2 liters of urine per day. 1 liter is enough to power a small generator for 6 hours.