Blogs/Webmag. 15 Things That Turn Men Off. Healthy Relationship Advice - Love Life Tips. The most timeless relationship wisdom ever. The Secret Signals Your Body Language Sends to Men. You may not even realize all the messages your body language sends to a guy — before you even speak to him. 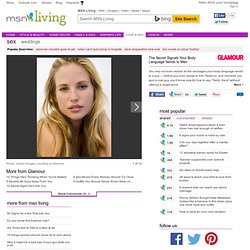 Read on, and next time you spot a cute guy, you'll know exactly how to say, "Hello, there" without uttering a single word. What catching his eye—and holding it for a couple of seconds—says to him … This is the most powerful weapon in your body-language-flirting arsenal, says Judi James, author of The Body Language Rules: A Savvy Guide to Understanding Who's Flirting, Who's Faking, and Who's Really Interested. "If you hold his gaze for just a half second longer than the usual split-second gaze, and then you look down and back at him, it tells the guy that you've considered him and you like what you see," James says.

Try this move in a crowded bar or at a party. Un-Memorizing the “Silence is Sexy” Date Script. A woman once told me pointedly something that has stayed with me to this day. 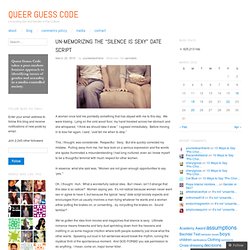 We were kissing. Lying on the cold wood floor, my hand traveled across her stomach and she whispered, “I think we should take it slow.” I agreed immediately. Before moving in to kiss her again, I said, “Just tell me when to stop.” The science behind a great marriage. The secret is simple... it is respect. 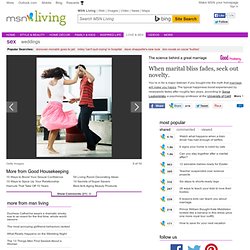 Respect covers everything. 4 signs your marriage needs work. You learn to spot them when you run a couples retreat called The Marriage Checkup. But program director James V. Cordova, Ph.D., promises that if you catch the bad marriage signs early, patients can make a full recovery. You know you've got relationship work to do if you notice... "Most people think these arguments are just about spending and saving, but they're really about our emotional relationships with money," Cordova says. 10 Unspoken Marriage Rules. Things you can tell just by looking at him. 8 Words That Give a Liar Away - MSN Living#2#3#4#5. Well I don't know about that. 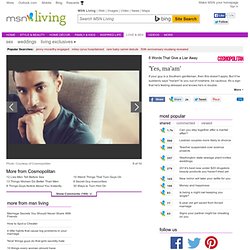 Now I kicked my lying, cheating, loser of a fiancé, so lets see. He swore up and down and said, "I don't care what THAT lying whore says, I NEVER touched her. " the truth was he was doing her for 2 1/2 years. He said " I WOULD NEVER do THAT to you" **** he was already doing it!! 15 Secrets of Happy Couples. (How about that... four of the five posts so far are advertisements for dating sites.) 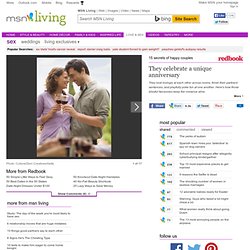 Well, this one is NOT! I wanted to say something about the "chores" aspect of a relationship. Margaret Paul, Ph.D.: How to Know When You've Met the Right Person for You. "How will I know when I meet the right person? 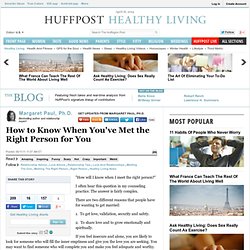 " I often hear this question in my counseling practice. The answer is fairly complex. Lessons in Life and Love Learned from a Girlfriend - Coming of Age Story. Because I was a shy child who was paradoxically frightened by all things new and ashamed of the things I did not know, I became infatuated, at the age of 11, with a girl whom I can only describe as the opposite of me. 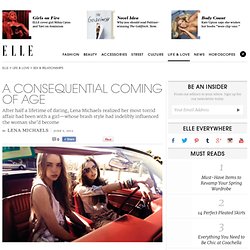 I first saw Larissa in the yard of our Brooklyn Catholic school: her school-issued plaid skirt rolled up at the waist, her blond hair pulled back and gelled firmly to her head (a look appropriated from the Latino girls), her backpack stamped with a million overlapping graffiti tags drawn in colorful Sharpies.

Her facial features were blunt, her eyes greenish and a little wild, and her walk like that of a rare bird—loose-hipped and confident, her ample chest thrust out, leading the way. Susan Sontag on Love: Illustrated Diary Excerpts. How Facebook Ruined Dating (and Breaking Up Too) Am I in Love - How Do You Know If You're In Love. How to get set up with Mr. Right - Edit Yourself. Smart Talk About Love. Why You're Not Married...Yet. Pre-Marriage Move in Leads to Unhappiness.

Quickly moving in with your honey may be the kiss of death for some couples. 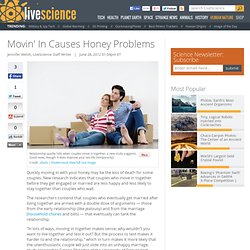 New research indicates that couples who move in together before they get engaged or married are less happy and less likely to stay together than couples who wait. The researchers contend that couples who eventually get married after living together are armed with a double dose of arguments — those from the early relationship (like jealousy) and from the marriage (household chores and bills) — that eventually can tank the relationship. "In lots of ways, moving in together makes sense; why wouldn't you want to live together and test it out?

But the process to test makes it harder to end the relationship," which in turn makes it more likely that the unenthusiastic couple will just slide into an unhappy marriage, study researcher Galena Rhoades of the University of Denver told LiveScience. The Neuroscience of Relationship Breakups. "...Loves me, loves me not" An unexpected and unwanted breakup can cause considerable psychological distress. People report feeling as if they have been kicked in the stomach or blindsided and knocked down. Feelings of rejection and self-doubt are common, as is the feeling of being stuck and unable to let go, even when one wants to. Decisions, Decisions. The Neuroscience of Romanticized Love – Part 1: Emotion Taboos. True love is an act of will that often transcends ephemeral feelings of love…it is correct to say, ‘Love is as love does.’” ~ SCOTT PECK Romanticized ideals for love, and romantic love that leads to long term healthy companionship love with all the trimmings, produce two dramatically different outcomes. 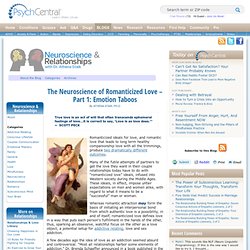 Many of the futile attempts of partners to get the love they want in their couple relationships today have to do with “romanticized love” ideals, infused into Western society during the Middle Ages. 10 Studies That Affect Your Relationships - Can Cheating Kill? Qualities all faithful men have. Get in Shape to Get Your Groove Back. Your husband thinks you're beautiful and sexy, but between your roller coaster hormones, lack of sleep, and focus on the new baby, your mood for intimacy is practically nonexistent. Losing that loving feeling after giving birth is understandable — your body is healing, and your new center of attention is your baby. Beware of Person? 50 Things She Wishes You Knew - En Güzel Sözler - Blogcu. Sex and the Single Girl: Why American culture is still so scared by single people. Helen Gurley Brown author of the classic here in 2006 Peter Kramer/Getty Images. The averagely nonjudgmental person may wonder why, in 2012, being single should be a radical act, an interesting topic of discussion, a viable subject for a spate of new books and magazine covers.

A Women's Online Magazine. You are beautiful. 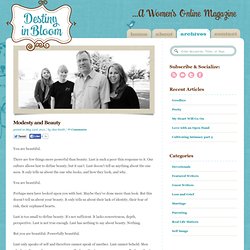 There are few things more powerful than beauty. Lust is such a poor thin response to it. Our culture allows lust to define beauty, but it can’t. Lust doesn’t tell us anything about the one seen. It only tells us about the one who looks, and how they look, and why. 30 Relationship Tips For Women Who Love Men. 1) If a man wants you, nothing can keep him away. 2) If he doesn't want you, nothing can make him stay.... 3) Stop making excuses for a man and his behavior. Likewise, don't make excuses for your own bad behviour. Take action, make change, and created the life you deseve. This list of 30 Things to Have and to Know Before Age 30 is a great place to start (even at 40, 50 or 60!) Relationships. Modern Day Matchmaker: 12 Signs You're Not Ready for Marriage.

5 Douchebag Behaviors Explained by Science. Eight Ways to Spot Emotional Manipulation. 40 healthy relationship signs. The Best Sex Positions Ever. Is He "The One"? 10 First-Date Lies Women Tell. Why...just...why...I​ understand the kids one though. All Sex Positions. Simple marriage. Never Date a Musician. RELATIONS. Relationship. Romance. 75 Ways to Show Love. 9 Signs You've Met The One. Triangular theory of love. The triangular theory of love is a theory of love developed by psychologist Robert Sternberg. In the context of interpersonal relationships, "the three components of love, according to the triangular theory, are an intimacy component, a passion component, and a decision/commitment component.