Julian Assange on George Bush's Library and Bradley Manning's Trial. I had an opportunity to interview WikiLeaks founder Julian Assange at the Ecuadorian Embassy in London, where he has been granted political asylum since June 2012. 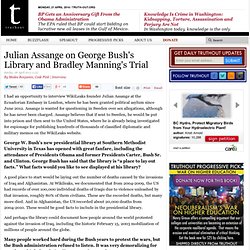 Assange is wanted for questioning in Sweden over sex allegations, although he has never been charged. Assange believes that if sent to Sweden, he would be put into prison and then sent to the United States, where he is already being investigated for espionage for publishing hundreds of thousands of classified diplomatic and military memos on the WikiLeaks website. George W. Bush’s new presidential library at Southern Methodist University in Texas has opened with great fanfare, including the attendance of Presidents Obama and former Presidents Carter, Bush Sr. and Clinton. George Bush has said that the library is “a place to lay out facts.” A good place to start would be laying out the number of deaths caused by the invasions of Iraq and Afghanistan.

As Pierce observes in the book excerpt following this introduction,"The rise of Idiot America, though, is essentially a war on expertise ... Green News, Energy, Environment, Animals, Climate Change, Extreme Weather - HuffPost Green. End the Prison-Industrial Complex, Now! Most readers probably know the outline of this story: beginning in the 1970s the incarceration rate in America, the proportion of the population sent to prison, started to rise exponentially.

The rate of incarceration in America is now the highest in the world. And in absolute numbers the U.S. has gone from having around 300,000 citizens in prison in the late 1970s to about 2.3 million as of last year. This doesn’t include those held in immigrant detention facilities, a number that has also risen exponentially, particularly in the last four years. United States v. O’Brien. View this case and other resources at: Citation. 130 S. 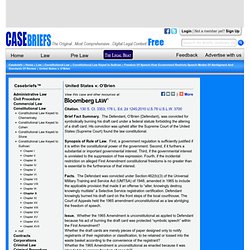 Ct. 3353; 176 L. Ed. 2d 1245;2010 U.S.78 U.S.L.W. 3700 Brief Fact Summary. The Defendant, O’Brien (Defendant), was convicted for symbolically burning his draft card under a federal statute forbidding the altering of a draft card. The Disney Bloodline. The Disney Bloodline The Illuminati have refined the art of deception far beyond what the common man has imagined. 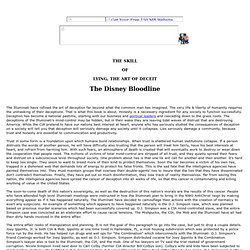 The very life & liberty of humanity requires the unmasking of their deceptions. That is what this book is about. Honesty is a necessary ingredient for any society to function successfully. Deception has become a national pastime, starting with our business and political leaders and cascading down to the grass roots. Trust in some form is a foundation upon which humans build relationships. INFORMATION CLEARING HOUSE. NEWS, COMMENTARY & INSIGHT. Politics, Emergency Preparedness, Economic Issues, War & Foreign Policy, DIY Projects, Liberty, Anti-GMO, Alternative Energy & Architecture, Geopolitics, the Federal Reserve & International Bankers, Survival. Fearless, Independent News and Opinion. UncoverTheNews.com - Because No News Is Not Good News. The History The US Government HOPES You Never Learn!

Informationliberation - The news you're not supposed to know... WikiLeaks. VoteMatch Quiz. KGB: Debriefing - THE KGB v THE CIA: THE SECRET STRUGGLE. His program sets out to look at the Cold War not as a political conflict but as a clash between two intelligence services which, because of their very nature, often had more in common with each other than with the governments that employed them. 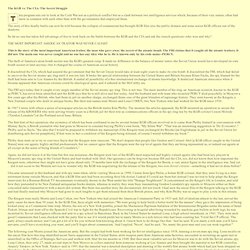 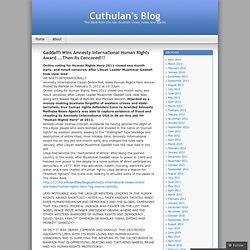 Hijacked as a money-making business forgetful of western crimes and state-terrorism, true human rights defenders have re-branded AmnestyMathaba News Agency was able to capture evidence of fraud and cheating by Amnesty International USA in its on-line poll for “Human Rights Hero” of 2011. The problem was Libya had an independent state bank, not part of BIS (Rothschild’s banks) and wanted to switch trading oil from dollars to gold.