PalliaTech Science – Nutrients. Plants are uniquely able to create their own food through photosynthesis, using the sun’s energy to synthesize glucose from carbon dioxide and water. 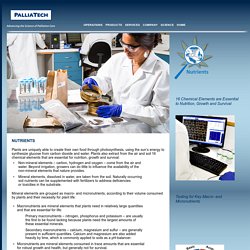 Plants also extract from the air and soil 16 chemical elements that are essential for nutrition, growth and survival: Mineral elements are grouped as macro- and micronutrients, according to their volume consumed by plants and their necessity for plant life: Macronutrients are present in plant tissues in quantities from 0.2-0.4 percent of dry weight while micronutrients are measured in parts per million, ranging from 5-200 ppm. Plants derive nutrients from the soil, where they exist in solution with water.

Most soils provide adequate plant nutrition and do not require fertilizers to complete the life cycle. Plants absorb nutrients through their roots in a process called cation exchange. The acidity or basicity (pH) as well as the texture of soils influence the ability of plants to absorb nutrients. Bark Beetles Are Decimating Our Forests. That Might Actually Be a Good Thing. Illustration by Bill Mayer There is an eerie feel to this grove of lodgepole pines that I can't quite put my finger on as entomologist Diana Six tromps ahead of me, hatchet in hand, scanning the southwestern Montana woods for her target. 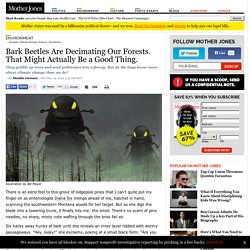 But as she digs the blade into a towering trunk, it finally hits me: the smell. There's no scent of pine needles, no sharp, minty note wafting through the brisk fall air. Six hacks away hunks of bark until she reveals an inner layer riddled with wormy passageways. "Hey, looky! " Whole Systems Design — Roots to Fruits. From afar, we see skin, hair, eyes, a nose, and so forth. 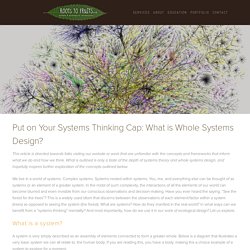 These are complex systems in and of themselves, composed of billions of cells, nerves, and what have you. Beneath our skin live the systems that make up our skeleton, organs, muscles, veins, nerves and experiences of creativity, thoughts, and spirituality. Again, each of these systems are comprised of interconnected systems that can be observed in isolation but can only function properly when connected. We can observe the heart in great detail, but doing so will not reveal the complex mystery of how it controls the flow of blood or exchange of oxygen and carbon dioxide through our lungs, nor how our thoughts, breath or muscles function in and of themselves. You may have become very frightened at one time or another. From beyond our skin come our necessary inputs and inherent characteristics or outputs.

This roughly describes the basic whole system of the human body. Causes of soil acidity. Woodboring beetle. The term woodboring beetle encompasses many species and families of beetles whose larval or adult forms eat and destroy wood (i.e., are xylophagous).[1] In the woodworking industry, larval stages of some are sometimes referred to as woodworms. 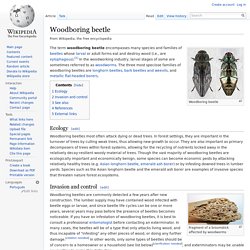 The three most speciose families of woodboring beetles are longhorn beetles, bark beetles and weevils, and metallic flat-headed borers. Ecology[edit] Woodboring beetles most often attack dying or dead trees. In forest settings, they are important in the turnover of trees by culling weak trees, thus allowing new growth to occur. They are also important as primary decomposers of trees within forest systems, allowing for the recycling of nutrients locked away in the relatively decay-resilient woody material of trees. Invasion and control[edit] Fragment of a broomstick affected by woodworms Woodboring beetles are commonly detected a few years after new construction. Methods of treatment include: See also[edit] References[edit] External links[edit] V.

Entomological Expert Witness: Beetles. Wood Destroying Beetles The Mississippi Valley, Gulf States, Eastern Seaboard and other areas of high humidity and temperate-to-seasonally-warm climates are most susceptible to wood boring beetles and their damage. 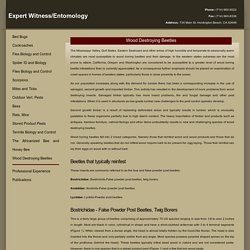 In the western states subareas are the most prone to attack. California, Oregon and Washington are considered to be susceptible to a greater level of wood boring beetle infestations than is currently appreciated. As a consequence further emphasis should be placed on examination of crawl spaces in homes of western states, particularly those in close proximity to the ocean. As our population increases along with the demand for lumber there has been a corresponding increase in the use of salvaged, second growth and imported timber.