Gohatto. So then: this is the way of the samurai. 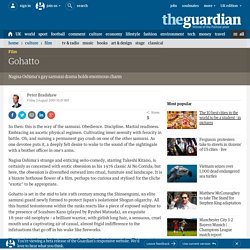 The movie's title - which means "code" or "taboo" - is its paradox. And all the time, little or nothing is happening. John Wayne’s World. Transnational Masculinity in the Fifties By Russell Meeuf Publication Year: 2013 Connecting John Wayne’s films to the transnational historical context of the 1950s, John Wayne’s World argues that Wayne’s depictions of heroic masculinity dovetailed with the rise of Hollywood’s cultural dominance and the development of global capitalism after World War II. 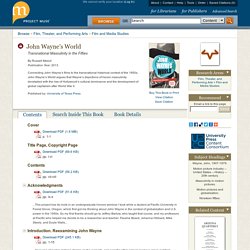 Published by: University of Texas Press Acknowledgments. Is not available. Training the Samurai Mind: A Bushido Sourcebook. Bushido. Japanese samurai in armour, 1860s. 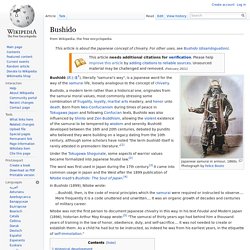 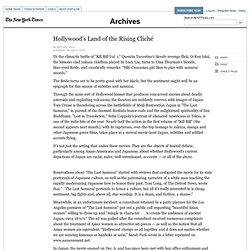 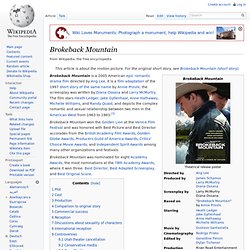 Plot[edit] In 1963, Ennis Del Mar (Heath Ledger) and Jack Twist (Jake Gyllenhaal) are hired by Joe Aguirre (Randy Quaid) to herd his sheep through the summer in the Wyoming mountains. After a night of heavy drinking, Jack makes a sexual pass at Ennis, who is initially reluctant but eventually responds to Jack's advances. Though he informs Jack that it was a one-time incident, they develop a sexual and emotional relationship. Gohatto. Django Unchained. The story is set in early winter and then spring, during the antebellum era of the Deep South with preliminary scenes taking place in Old West Texas. 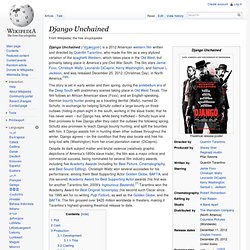 The film follows an African-American slave (Foxx), and an English-speaking, German bounty hunter posing as a traveling dentist (Waltz), named Dr. Schultz. In exchange for helping Schultz collect a large bounty on three outlaws (hiding-in-plain-sight in the south, working in the slave trade) that he has never seen – but Django has, while being trafficked – Schultz buys and then promises to free Django after they catch the outlaws the following spring. Schultz also promises to teach Django bounty hunting, and split the bounties with him, if Django assists him in hunting down other outlaws throughout the winter. Django agrees – on the condition that they also locate and free his long-lost wife (Washington) from her cruel plantation owner (DiCaprio). Plot[edit] Cast[edit] 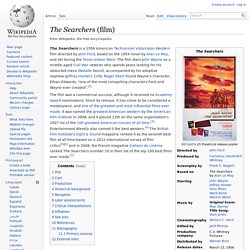 Ethan Edwards (Wayne) returns after a long absence to the home of his brother Aaron (Walter Coy) in the wilderness of West Texas. Ethan fought in the Civil War on the side of the Confederacy, and in the three years since that war ended he apparently fought in the Mexican revolutionary war as well. He has a large quantity of gold coins of uncertain origin in his possession, and a medal from the Mexican campaign that he gives to his young niece, Debbie (played as a child by Lana Wood).

As a former Confederate soldier, he is asked to take an oath of allegiance to the Texas Rangers; he refuses. Seppuku. Illustration from Sketches of Japanese Manners and Customs, by J. 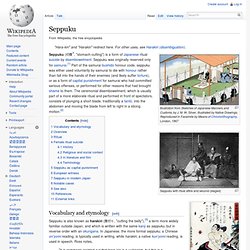 M. W. The Last Samurai. Cruise portrays an American officer, whose personal and emotional conflicts bring him into contact with samurai warriors in the wake of the Meiji Restoration in 19th Century Japan. The film's plot was inspired by the 1877 Satsuma Rebellion led by Saigō Takamori, and on the westernization of Japan by colonial powers, though this is largely attributed to the United States in the film for American audiences. It is also based on the stories of Jules Brunet, a French army captain who fought alongside Enomoto Takeaki in the earlier Boshin War and Frederick Townsend Ward, an American mercenary who helped Westernize the Chinese army by forming the Ever Victorious Army. The Last Samurai was well received upon its release, with a worldwide box office total of $456 million.[1] It was nominated for several awards, including four Academy Awards, three Golden Globe Awards and two National Board of Review Awards.

Plot[edit] In 1876, U.S. Cast[edit] 13 Assassins Movie Review & Film Summary (2011) "13 Assassins" has what many action pictures need, a villain who transcends evil and ascends to a realm of barbaric madness. 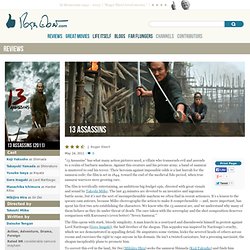 Against this creature and his private army, a band of samurai is mustered to end his terror. 13 Assassins. 13 Assassins (Japanese: 十三人の刺客, romaji: Jūsannin no Shikaku?) 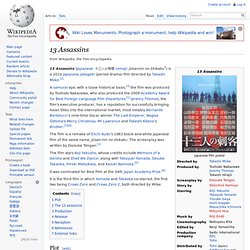 Is a 2010 Japanese jidaigeki (period drama) film directed by Takashi Miike.[2] The film is a remake of Eiichi Kudo’s 1963 black-and-white Japanese film of the same name, Jûsan-nin no shikaku. The screenplay was written by Daisuke Tengan.[1] It is the third film in which Yamada and Takaoka co-starred, the first two being Crows Zero and Crows Zero 2, both directed by Miike. Plot[edit] Shinzaemon gathers 11 more samurai whom Sir Doi knows can be trusted, including Shinzaemon's nephew, Shinroukuro. Mccluremarlboro05.pdf. Www.nyu.edu/cas/ewp/2012TitlePrologueTOCd03.pdf. Making Sense of Masculinity and War. PS: Political Science & Politics - Abstract - Masculinity, Citizenship, and the Making of War. Educating for Citizenship: What Should Political Scientists Be Teaching? Masculinity, Citizenship, and the Making of War Nancy C. M. Hartsocka1 a1 University of Washington Citizenship is not one of the issues political scientists hotly contest.

Korean War and Japan’s Recovery - 1945–1952 - Milestones. Korean War and Japan’s Recovery As the Cold War came to dominate U.S. foreign policy, America extended security commitments to two nations in Northeast Asia—the Republic of Korea and Japan. The Department of State under Secretary Dean Acheson forged a series of agreements to build a permanent American presence in the region and support these two nations, creating alliances that have lasted to today.

The 25th Infantry Division prepares to go to Korean War from Japan. Occupation and Reconstruction of Japan, 1945–52 - 1945–1952 - Milestones. Www.apa.org/pi/lgbt/resources/sexuality-definitions.pdf. Www.nyu.edu/cas/ewp/hardinhair09.pdf. Samurai.pdf. Behind the Camera - Seven Samurai. The Warrior Archetype. Educational Videos for Teaching Media Literacy. Robert Stam. Robert Stam is University Professor at New York University, where he teaches about the French New Wave filmmakers.[1] Stam has published widely on French literature, comparative literature, and on film topics such as film history and film theory. Ella Shohat. Professor Ella Habiba Shohat (Arabic: إيلا حبيبة شوحط) is Professor of Cultural Studies at New York University, and has taught, lectured and written extensively on issues having to do with Eurocentrism and Orientalism, as well as with postcolonial and transnational approaches to Cultural Studies.

The Press and the Myths of War. There is nothing glorious or gallant about combat. The Press and the Myths of War. The Press and the Myths of War. Excerpt: The Myth of War. When we allow mythic reality to rule, as it almost always does in war, then there is only one solution — force. In mythic war we fight absolutes. We must vanquish darkness. It is imperative and inevitable for civilization, for the free world, that good triumph, just as Islamic militants see us as infidels whose existence corrupts the pure Islamic society they hope to build. But the goal we seek when we embrace myth is impossible to achieve. NEVER AGAIN, AGAIN - After the Peace, the War Against Memory. Sex and gender distinction. What do we mean by "sex" and "gender"? The Movies and Social Class: Media Resources Center UCB.

Www.classism.org/wp/wp-content/uploads/2010/05/resources_film.pdf. Imagined communities: reflections on the origin and spread of nationalism.