Immigration to the US 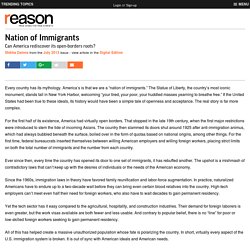 Interesting Facts about Racial Minorities in America. U.S.-Mexico Border. A view from the inside - The deportation machine. Bordering on cruelty - Deported Mexicans. Legalise them, don't naturalise them - Republicans and immigration. Timeline. STELLY AND CHLOE'S TIMELINE: IMMIGRATION TO THE USA UNTIL 1965. Maureen and Adrianna's Timeline on Immigration: 1965 - today. Anne-Laure's timeline. Camille and Clara's timeline. U.S. Immigration Before 1965_ Article. From its earliest days, America has been a nation of immigrants, starting with its original inhabitants, who crossed the land bridge connecting Asia and North America tens of thousands of years ago. 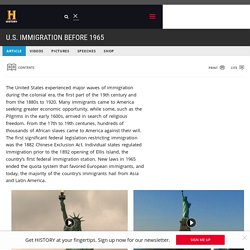 By the 1500s, the first Europeans, led by the Spanish and French, had begun establishing settlements in what would become the United States. In 1607, the English founded their first permanent settlement in present-day America at Jamestown in the Virginia Colony. Some of America’s first settlers came in search of freedom to practice their faith. In 1620, a group of roughly 100 people later known as the Pilgrims fled religious persecution in Europe and arrived at present-day Plymouth, Massachusetts, where they established a colony. They were soon followed by a larger group seeking religious freedom, the Puritans, who established the Massachusetts Bay Colony. A larger share of immigrants came to America seeking economic opportunities. U.S. Immigration Since 1965 - Facts & Summary. In reality (and with the benefit of hindsight), the bill signed in 1965 marked a dramatic break with past immigration policy, and would have an immediate and lasting impact. 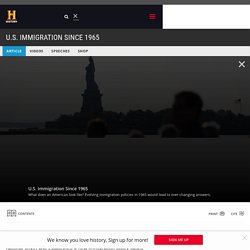 In place of the national-origins quota system, the act provided for preferences to be made according to categories, such as relatives of U.S. citizens or permanent residents, those with skills deemed useful to the United States or refugees of violence or unrest. Though it abolished quotas per se, the system did place caps on per-country and total immigration, as well as caps on each category.

As in the past, family reunification was a major goal, and the new immigration policy would increasingly allow entire families to uproot themselves from other countries and reestablish their lives in the U.S. U.S. Immigration Before 1965 - Videos. You're almost done! 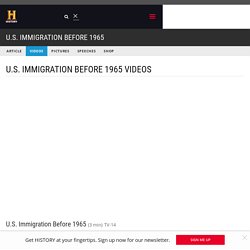 You will soon receive an activation email. Once you click on the link, you will be added to our list. If you do not receive this email, please contact us. To ensure delivery to your inbox, add us to your address book. U.S. Immigration Since 1965 _ Video - You're almost done! 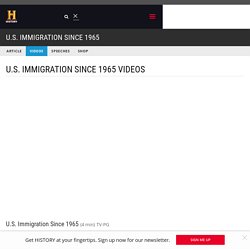 You will soon receive an activation email. Once you click on the link, you will be added to our list. If you do not receive this email, please contact us. The Birth of ‘Illegal’ Immigration _ Article. Until the late 19th century, there wasn’t any such thing as “illegal” or “legal” immigration to the United States. 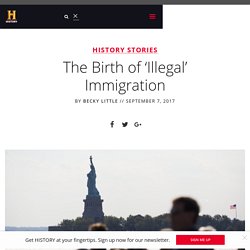 That’s because before you can immigrate somewhere illegally, there has to be a law for you to break. American immigration didn’t really begin until the late 1700s, when the United States became an independent nation. Nations and countries Flashcards. A Nation of Immigrants: Welcoming New Americans to the United States. David Agnew, Alexandria Mayor William Euille and members of the Alexandria City Council celebrate the naturalization of twenty-five new Americans at the Alexandria City Hall. 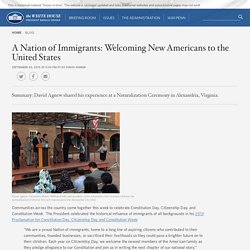 Communities across the country came together this week to celebrate Constitution Day, Citizenship Day, and Constitution Week. The President celebrated the historical influence of immigrants of all backgrounds in his 2013 Proclamation for Constitution Day, Citizenship Day and Constitution Week: “We are a proud Nation of immigrants, home to a long line of aspiring citizens who contributed to their communities, founded businesses, or sacrificed their livelihoods so they could pass a brighter future on to their children. Each year on Citizenship Day, we welcome the newest members of the American family as they pledge allegiance to our Constitution and join us in writing the next chapter of our national story.” David Agnew is Deputy Assistant to the President and Director of Intergovernmental Affairs. A Nation of Immigrants. Co-written by Rep. 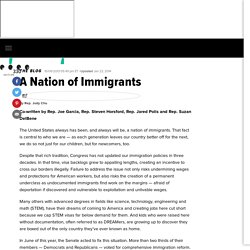 A view from the inside - The deportation machine. Deportations Are Up Among Boston’s Undocumented Irish. Bordering on cruelty - Deported Mexicans. Immigrationreform. US illegal immigrants. US Senate Rejects Immigration Reform Proposals. Model Citizen Without Citizenship: Undocumented Science Teacher Detained. Dreamers Await Legislative Solution. DACA Stalemate Continues on Capitol Hill. A Border Town's Mayor On Immigration. Legalise them, don't naturalise them - Republicans and immigration. Compare the candidates: Clinton vs. Trump on immigration. Editor's note: This is the first in a series of stories comparing the candidates' positions on major policy issues. 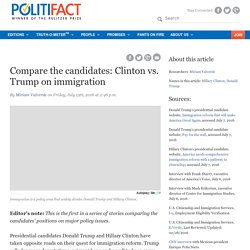 Presidential candidates Donald Trump and Hillary Clinton have taken opposite roads on their quest for immigration reform. Trump calls for mass deportations, migrant bans and a wall to keep away people from coming into the country, while Clinton wants a pathway to citizenship, immigrant integration and protection from deportation. Trump and Clinton both say they favor secure borders, but in every other respect they are at odds over how they’d tackle key immigrant issues.