Forget Vitamin D; Why Infrared Light Explains Many of the Benefits of Sunlight – The Hammer of Health. The practice of “heliotherapy” or the use of light (generally sunlight) to produce health benefits dates back as far as Hippocrates, who is said to have recommended sunlight exposure for medical purposes. 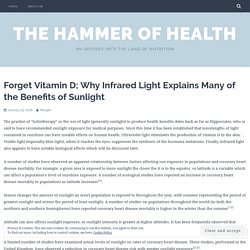 Since this time it has been established that wavelengths of light contained in sunshine can have notable effects on human health. Ultraviolet light stimulates the production of vitamin D in the skin. Visible light (especially blue light), when it reaches the eyes, suppresses the synthesis of the hormone melatonin. Finally, infrared light also appears to have notable biological effects which will be discussed later. A number of studies have observed an apparent relationship between factors affecting sun exposure in populations and coronary heart disease mortality.

Season changes the amount of sunlight an area’s population is exposed to throughout the year, with summer representing the period of greatest sunlight and winter the period of least sunlight. References: 1. Like this: How Do You Prevent Heart Disease? (vitamin D might not help, but there’s plenty you can do) – J.D. Moyer. We all have one … let’s keep it beating. 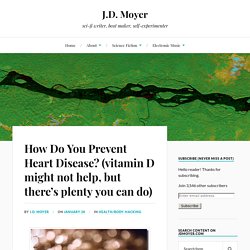 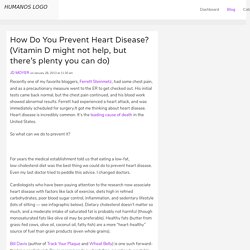 His initial tests came back normal, but the chest pain continued, and his blood work showed abnormal results. Ferrett had experienced a heart attack, and was immediately scheduled for surgery.It got me thinking about heart disease. Heart disease is incredibly common. It’s the leading cause of death in the United States. So what can we do to prevent it? For years the medical establishment told us that eating a low-fat, low-cholesterol diet was the best thing we could do to prevent heart disease.

Cardiologists who have been paying attention to the research now associate heart disease with factors like lack of exercise, diets high in refined carbohydrates, poor blood sugar control, inflammation, and sedentary lifestyle (lots of sitting — see infographic below). Ferrett had to undergo triple bypass surgery. Cholesterol and Genetics Not so fast. Summary. Human photosynthesis – beyond vitamin D – Rosemary Cottage Clinic Blog. Most people know that vitamin D is synthesised in the skin when exposed to sunshine – or more specifically to the ultraviolet (UV) radiation in sunshine. 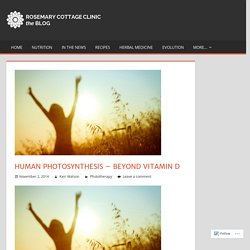 But few people know that human skin can photosynthesise nitric oxide (NO) too. Nitric oxide is a potent vasodilator which lowers blood pressure. This may explain, in part, why we often feel positive and relaxed when outside on a sunny day. It may also account for the observation that the incidence of hypertension and cardiovascular disease (CVD) correlates with latitude and rises in winter. [1] Recently, Dr Richard Weller, at the University of Edinburgh, demonstrated that the nitric oxide formed when the skin of volunteers was exposed to UVA light, led to blood pressure reduction that lasted for up to an hour after exposure. So profound was the effect that it led him to say: The standard sun-phobic advice to avoid midday sun and slap on sunscreens is based on the putative risks of UV induced skin cancers. Man – the naked ape. References. Vitamin D is Synthesized From Cholesterol and Found in Cholesterol-Rich Foods.

May 25, 2006 by Chris Masterjohn (Please also see my more recent and extensive article, From Seafood to Sunshine: A New Understanding of Vitamin D Safety, as well as my article on vitamin D nutrition during pregnancy and lactation, Vitamin D in the Infant: Requirements and Safety. 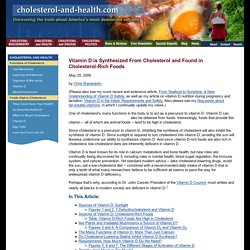 Also please see my blog posts about fat-soluble vitamins, in which I continually update my views.) One of cholesterol's many functions in the body is to act as a precursor to vitamin D. Vitamin D can also be obtained from foods. Since cholesterol is a precursor to vitamin D, inhibiting the synthesis of cholesterol will also inhibit the synthesis of vitamin D. Vitamin D is best known for its role in calcium metabolism and bone health, but new roles are continually being discovered for it, including roles in mental health, blood sugar regulation, the immune system, and cancer prevention. Perhaps that's why, according to Dr. In This Article: 7-dehydrocholesterol is a very close precursor to cholesterol.