The Benefit of Vitamins

Pdfaccess.ashx. Atorvastatin Decreases the Coenzyme Q10 Level in the Blood of Patients at Risk for Cardiovascular Disease and Stroke. 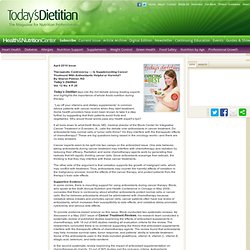 By Sharon Palmer, RD Today’s Dietitian Vol. 12 No. 4 P. 26 Today’s Dietitian taps into the hot debate among leading experts and highlights the importance of whole foods nutrition during therapy. “Lay off your vitamins and dietary supplements” is common advice patients with cancer receive when they start treatment. Some health providers have even been known to take it a step further by suggesting that their patients avoid fruits and vegetables. It all boils down to what Keith Block, MD, medical director of the Block Center for Integrative Cancer Treatment in Evanston, Ill., calls the debate over antioxidants in cancer treatment. Cancer experts seem to be split into two camps on the antioxidant issue. The other side of the argument is that oxidation supports the growth of malignant cells, which may conflict with treatment. Kedar N. “This is an area of controversy.

Twenty-seven years bring no deaths from vitamins but three million from pharmaceuticals. (NaturalNews) Despite mainstream medical establishments and media outlets portraying multivitamin supplements as worthless and oftentimes toxic, vitamins have led to 0 deaths over the past 27 years. 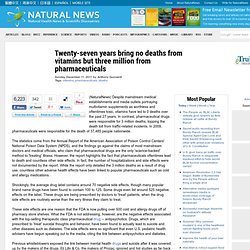 In contrast, pharmaceutical drugs were responsible for 3 million deaths, topping the death toll from traffic-related incidents. In 2009, pharmaceuticals were responsible for the death of 37,485 people nationwide. The statistics come from the Annual Report of the American Association of Poison Control Centers' National Poison Data System (NPDS), and the findings go against the claims of most mainstream doctors and medical officials, who claim that pharmaceutical drugs are the only 'science-backed' method to 'treating' illness. However, the report highlights the fact that pharmaceuticals oftentimes lead to death and countless other side effects.

In fact, the number of hospitalizations and side effects were not documented by the report. Sources for this article include: Why Many Vitamin Studies are Absolutely Worthless. Does vitamin E naturally help protect against the effects of aging, or does it lead to liver damage and complications associated with lung cancer? 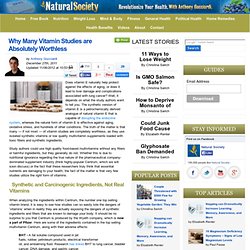 Well, it depends on what the study authors want to tell you. The synthetic version of vitamin E is a petrochemically derived analogue of natural vitamin E that is capable of disrupting the endocrine system, whereas the natural form of vitamin E is effective against aging, oxidative stress, and hundreds of other conditions. The truth of the matter is that many — if not most — of vitamin studies are completely worthless, as they use isolated synthetic vitamins or low quality multivitamin supplements loaded with toxic fillers and synthetic ingredients. Study authors could use high quality food-based multivitamins without any fillers or harmful ingredients, but they generally do not. Why Many Vitamin Studies are Absolutely Worthless. Findings from Flawed Study Used To Discredit Multivitamin/Mineral Supplements. Starting in 1983, the Life Extension Foundation® warned of dangers associated with commercial multivitamin/mineral formulas. Our earliest concern was that free radicals generated by supplemental iron would increase cancer and heart disease risk.

Our fears were born out shortly thereafter in published studies showing that elevation in markers of iron intake increased risk (by more than fivefold) of common degenerative diseases including heart attack and cancer.1,2,3,4,5,6,7,8,9,10,11,12,13,14,15,16,17 Back in 1983, commercial companies bragged in their advertising about how much iron their multivitamins contained. Despite our repeated warnings, very few commercial supplement companies removed iron from their multivitamin formulas as the public perception was that supplemental iron was beneficial. The name of this report is the Iowa Women’s Health Study. The media, of course, lumps ALL nutrients together and claims they are “no fountain of youth for women.” Too Much Vitamin A!

MSM. Garlic and grape seed supplementation associated with fewer blood cancers. An article published online on July 29, 2011 in the journal Cancer Epidemiology, Biomarkers & Prevention reveals a link between increased use of garlic, grape and multivitamin supplements and a lower risk of hematologic malignancies, including Hodgkin and non-Hodgkin lymphomas, leukemia and myeloma. 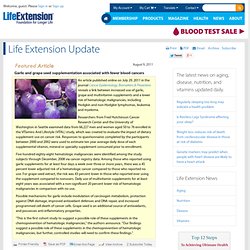 Researchers from Fred Hutchinson Cancer Research Center and the University of Washington in Seattle examined data from 66,227 men and women aged 50 to 76 enrolled in the VITamins And Lifestyle (VITAL) study, which was created to evaluate the impact of dietary supplement use on cancer risk. Responses to questionnaires completed by the participants between 2000 and 2002 were used to estimate ten year average daily dose of each supplemental vitamin, mineral or specialty supplement consumed prior to enrollment. Five hundred eighty-eight hematologic malignancies were identified among the study subjects through December, 2008 via cancer registry data.