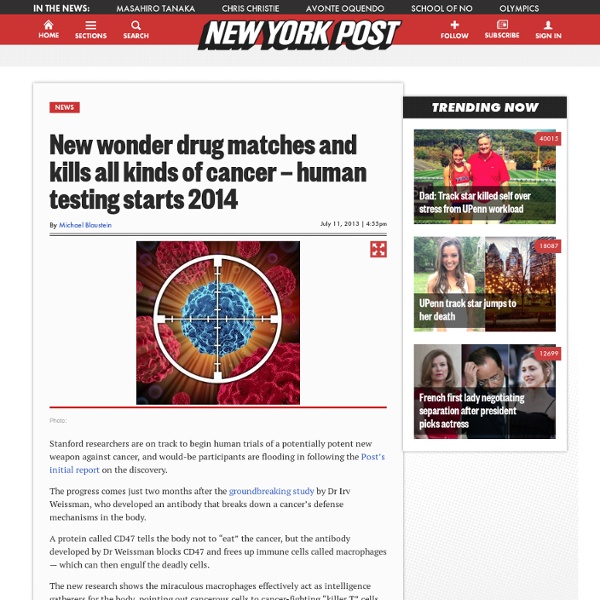 Stanford researchers are on track to begin human trials of a potentially potent new weapon against cancer, and would-be participants are flooding in following the Post’s initial report on the discovery. The progress comes just two months after the groundbreaking study by Dr Irv Weissman, who developed an antibody that breaks down a cancer’s defense mechanisms in the body. A protein called CD47 tells the body not to “eat” the cancer, but the antibody developed by Dr Weissman blocks CD47 and frees up immune cells called macrophages — which can then engulf the deadly cells. The new research shows the miraculous macrophages effectively act as intelligence gatherers for the body, pointing out cancerous cells to cancer-fighting “killer T” cells. The T cells then “learn” to hunt down and attack the cancer, the researchers claim. The clinical implications of the process could be profound in the war on cancer. This turns them into a personalized cancer vaccine.

Scientists Identify Gene Required for Nerve Regeneration A gene that is associated with regeneration of injured nerve cells has been identified by a team of researchers led by Prof Melissa Rolls of Penn State University. In fruit flies with two normal copies of the spastin gene, a team of scientists led by Prof Melissa Rolls of Penn State University found that severed axons were able to regenerate. However, in fruit flies with two or even only one abnormal spastin gene, the severed axons were not able to regenerate (Melissa Rolls / Penn State University) The team has found that a mutation in a single gene can entirely shut down the process by which axons – the parts of the nerve cell that are responsible for sending signals to other cells – regrow themselves after being cut or damaged.

Human Cells have Electric Fields as Powerful as Lighting Bolts -A Galaxy Insight Using newly developed voltage-sensitive nanoparticles, researchers have found that the previously unknown electric fields inside of cells are as strong, or stronger, as those produced in lightning bolts. Previously, it has only been possible to measure electric fields across cell membranes, not within the main bulk of cells, so scientists didn't even know cells had an internal electric field. This discovery is a surprising twist for cell researchers. Scientists don't know what causes these incredibly strong fields or why they' are there.

UCI, fellow chemists find a way to unboil eggs Irvine, Calif., Jan. 23, 2015 – UC Irvine and Australian chemists have figured out how to unboil egg whites – an innovation that could dramatically reduce costs for cancer treatments, food production and other segments of the $160 billion global biotechnology industry, according to findings published today in the journal ChemBioChem. “Yes, we have invented a way to unboil a hen egg,” said Gregory Weiss, UCI professor of chemistry and molecular biology & biochemistry. “In our paper, we describe a device for pulling apart tangled proteins and allowing them to refold. Sperm carries information about dad's weight Turns out dads are also eating for two. A study published December 3 in Cell Metabolism reveals that a man's weight affects the heritable information contained in sperm. The sperm cells of lean and obese men possess different epigenetic marks, notable at gene regions associated with the control of appetite. The comparisons, which included 13 lean men and 10 obese men, offer one biological explanation for why children of obese fathers are themselves more predisposed to obesity.

The Spice That Prevents Fluoride From Destroying Your Brain Fluoride is found everywhere today, from antibiotics to drinking water, no stick pans to toothpaste, making exposure inevitable. All the more reason why new research proving this common spice can prevent fluoride damage is so promising! Fluoride’s neurotoxicity has been the subject of academic debate for decades, and now a matter of increasingly impassioned controversy among the general public, as well. From ‘conspiracy theories’ about it being first used in drinking water in Russian and Nazi concentration camps to chemically lobotomize captives, to its now well-known IQ lowering properties, to its ability to enhance the calcification of the pineal gland – the traditional ‘seat of the soul’ – many around the world, and increasingly in the heavily fluoridated regions of the United States, are starting to organize at the local and statewide level to oust this ubiquitous toxicant from municipal drinking water.

7 Incredible Inventions by Teenage Wunderkinds When many of us were in our teens, work for science fairs comprised cut and paste displays on colorful presentation boards, and our hobbies weren't exactly about to change the world. But across the globe, teenagers with creative, scientific minds are already devising extraordinary devices, revolutionary materials and renewable technologies that might just change our planet for the greener. Click through to see some of their most incredible inventions - from bioplastics made from bananas to pee-powered energy generators and an ocean cleanup array to rid the world's oceans of waste.

Magnesium, Iodine and Sodium Bicarbonate by Mark Sircus Ac., OMD International Medical Veritas Association Edited by danreid.org Number One: Magnesium Chloride Flowers get an electrifying buzz out of visiting bees - life - 21 February 2013 Plants could turn out to be one of the more chatty organisms. Recent studies have shown they can communicate with a surprising range of cues. Now it turns out they could be sending out electrical signals, too. As they fly through the air, bees – like all insects – acquire a positive electric charge. Flowers, on the other hand, are grounded and so have a negative charge. Daniel Robert at the University of Bristol, UK, and colleagues set out to investigate whether bumblebees (Bombus terrestris) were able to make use of these signals.

Curious study calculates the “average” female face for each country Like us on FB: In a recent study, researchers from the Scottish University blended and aligned thousands of photos of women from 40 different countries to calculate the “average” face for each nation. The resulted images are surprisingly beautiful, as aligning and blending numerous images the most part of imperfections is inevitably removed. Truth be told the study used pictures of young women, that’s why the final images portray some well-above-the-average beauties. The interesting thing about this study is that looking through the different photos you can really distinguish all the physiognomic peculiarities that make each population different from the other.

7 Side Effects Of Getting High, Explained If you've ever consumed cannabis, then you probably don't need me to tell you there are some wonderful and weird side effects of getting high. After just a few puffs, bites, or drops of your favorite flower, edible, or tincture, sweet Mary Jane starts working her magic; and you'll just have to decide for yourself if the potential for weird side effects is worth the potential for wonderful ones. First things first: to understand how cannabis affects us, it's important to know that humans are born with cannabinoid receptors. These live on the surfaces of cells and are responsible for communicating changing conditions outside of the cell to the inner cell, thus instigating cellular responses. As the cannabis culture site Leafly explained, the main cannabinoid receptors CB1 and CB2 are responsible for the high you get from THC, and both receptors exist in various parts of your body.

Male and female brains wired differently, scans reveal Scientists have drawn on nearly 1,000 brain scans to confirm what many had surely concluded long ago: that stark differences exist in the wiring of male and female brains. Maps of neural circuitry showed that on average women's brains were highly connected across the left and right hemispheres, in contrast to men's brains, where the connections were typically stronger between the front and back regions. Ragini Verma, a researcher at the University of Pennsylvania, said the greatest surprise was how much the findings supported old stereotypes, with men's brains apparently wired more for perception and co-ordinated actions, and women's for social skills and memory, making them better equipped for multitasking.