One of the greatest controversies in oncology may have been resolved: Researchers may have discovere... 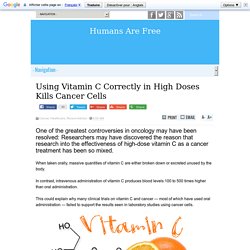 One of the greatest controversies in oncology may have been resolved: Researchers may have discovered the reason that research into the effectiveness of high-dose vitamin C as a cancer treatment has been so mixed. When taken orally, massive quantities of vitamin C are either broken down or excreted unused by the body. In contrast, intravenous administration of vitamin C produces blood levels 100 to 500 times higher than oral administration. This could explain why many clinical trials on vitamin C and cancer — most of which have used oral administration — failed to support the results seen in laboratory studies using cancer cells. How to Make Excellent Homemade Liposomal Vitamin C (UPDATED) High Vitamin D Levels Can Help to Prevent and Survive Cancer. Mae Chan, Prevent DiseaseWaking Times The active form of vitamin D essentially shuts down cancer cells by several mechanisms which inhibit proteins involved in metastases. 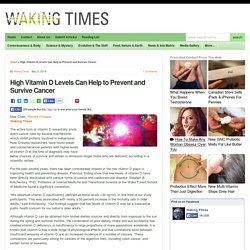 Now Chinese researchers have found breast and colorectalcancer patients with higher levels of vitamin D at the time of diagnosis may have better chances of survival and remain in remission longer those who are deficient, according to a scientific review. Vitamin B17: The Greatest Cover-Up In The History Of Cancer. Daud Scott, Reset.MeWaking Times The phrase ‘Let food be thy medicine and medicine be thy food’ could not hit any harder, especially when it comes to the present discussion related to cancer and our present state of nutrition and health. 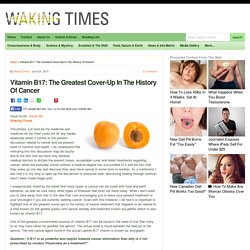 I do understand that venturing into this discussion may be touchy due to the fact that we have only allowed medical doctors to dictate the present cases, acceptable cures and latest treatments regarding cancer; while the everyday citizen without a medical degree has succumbed to it and the fact that they wake up one day and discover they (we) have cancer in some form or another. As a nutritionist I feel that it is my duty to open up the discussion to everyone here; discussing healing through nutrition hasn’t been made illegal (yet). The Vitamin Found to Destroy Cancer Cells. Barbara Minton, Natural SocietyWaking Times Evidence is mounting that humble little vitamin E plays a big role in keeping women safe from breast cancer. 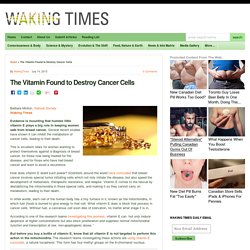 Several recent studies have shown it can inhibit the metabolism of cancer cells, leading to their death. This is excellent news for women wanting to protect themselves against a diagnosis of breast cancer, for those now being treated for the disease, and for those who have had breast cancer and want to avoid a recurrence. Intravenous Vitamin C - A Cancer Killer The FDA Wants Banned. Dave Mihalovic, Prevent DiseaseWaking Times Vitamin C has a broad spectrum antioxidant function with the ability to protect cell structures and DNA from free radical damage. 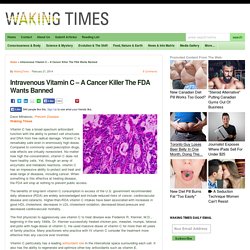 Vitamin C is remarkably safe even in enormously high doses. IV Vitamin C Stops the Growth of Some Aggressive Forms of Cancer. Dave Mihalovic, Prevent DiseaseWaking Times High-dose vitamin C has been studied as a treatment for patients with cancer since the 1970s. 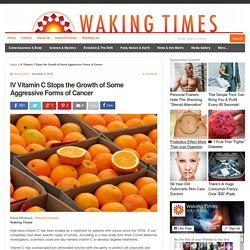 It can completely shut down specific types of tumors. According to a new study from Weill Cornell Medicine investigators, scientists could one day harness vitamin C to develop targeted treatments. Vitamin C has a broad spectrum antioxidant function with the ability to protect cell structures and DNA from free radical damage.

It is remarkably safe even in enormously high doses.