6 Health Risks of Taking Too Much Vitamin D. Vitamin D is extremely important for good health. 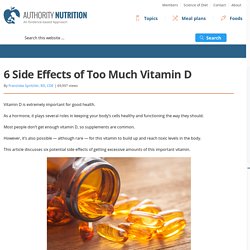 As a hormone, it plays several roles in keeping your body’s cells healthy and functioning the way they should. Most people don’t get enough vitamin D, so supplements are common. However, it’s also possible — although rare — for this vitamin to build up and reach toxic levels in the body. This article discusses six potential side effects of getting excessive amounts of this important vitamin. Deficiency and Toxicity Vitamin D is involved in calcium absorption, immune function and protecting bone, muscle and heart health. Yet aside from fatty fish, there are few foods rich in vitamin D. Because of this, deficiency is very common. Supplements are very common, and both vitamin D2 and vitamin D3 can be taken in supplement form. Vitamin D3 has been found to increase blood levels significantly more than D2. However, taking extremely high doses of vitamin D3 for long periods of time may lead to excessive buildup in the body. Niacin Rescues Cannibalistic Hamsters. FOR IMMEDIATE RELEASE Orthomolecular Medicine News Service, February 28, 2017 by W. 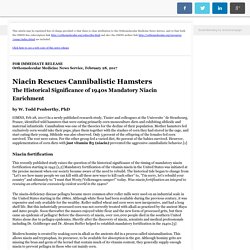 Todd Penberthy, PhD (OMNS, Feb 28, 2017) In a newly published research study, Tissier and colleagues at the Universite ' de Strasbourg, France, identified wild hamsters that were eating primarily corn monoculture diets and exhibiting siblicide and maternal infanticide. Cannibalism was one of the theories for the decline of their population. Mother hamsters fed exclusively corn would take their pups, place them together with the stashes of corn they had stored in the cage, and start eating their young. Niacin fortification This recently published study raises the question of the historical significance of the timing of mandatory niacin fortification starting in 1942.[1,2] Mandatory fortification of the vitamin niacin in the United States was initiated at the precise moment when our society became aware of the need to rebuild. Pellagra or schizophrenia? But cannibalism? How niacin is used as therapy Dr. Neil Gorsuch nominated for U.S. Supreme Court FDA quietly bans powerful life-saving intravenous Vitamin C.

It would be naive to think that the FDA endeavors to protect the public’s health as its primary focus. 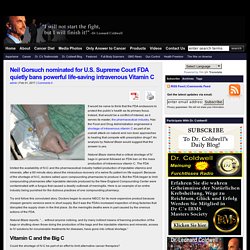 Indeed, that would be a conflict of interest, as it serves its master, the pharmaceutical industry. Has the Food and Drug Administration engineered a shortage of intravenous vitamin C as part of an overall attack on natural and non-toxic approaches to healing that compete with prescription drugs? An analysis by Natural Blaze would suggest that the answer is yes. Natural Blaze claims that a critical shortage of IV bags in general followed an FDA ban on the mass production of intravenous vitamin C. The FDA limited the availability of IV-C and the pharmaceutical industry halted production of injectable vitamins and minerals, after a 60 minute story about the miraculous recovery of a swine flu patient on life support.

Try and follow this convoluted story: Doctors began to source NECC for its more expensive product because cheaper generic versions were in short supply. Ergothioneine: A New Vitamin? Ergothioneine was discovered a century ago but ignored until recently when researchers found that we have a transporter protein in our bodies specifically designed to pull it out of our diets and into our tissues. 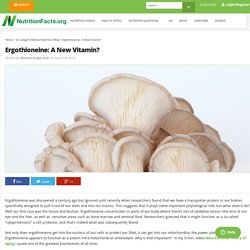 This suggests that it plays some important physiological role, but what does it do? Well our first clue was the tissue distribution. Ergothioneine concentrates in parts of our body where there’s lots of oxidative stress—the lens of our eye and the liver, as well as sensitive areas such as bone marrow and seminal fluid. Researchers guessed that it might function as a so-called “cytoprotectant,” a cell protector, and that’s indeed what was subsequently found.

Not only does ergothioneine get into the nucleus of our cells to protect our DNA, it can get into our mitochondria, the power plants of the cell. “Aging is a disease. How do we slow down oxidation? Here’s the catch: many antioxidants can’t penetrate through the mitochondrial membrane into the mitochondria. Inexpensive Vitamin Treats ‘So Many Diseases’ It Threatens Big Pharma. CHRISTINA SARICH | Naturalsociety | 8th Jan 2014 Peripheral neuropathy, which is characterized by sharp pain or numbing and tingling, affects people of all ages. 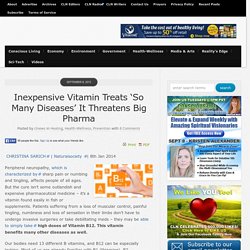 But the cure isn’t some outlandish and expensive pharmaceutical medicine – it’s a vitamin found easily in fish or supplements. Patients suffering from a loss of muscular control, painful tingling, numbness and loss of sensation in their limbs don’t have to undergo invasive surgeries or take debilitating meds – they may be able to simply take high doses of Vitamin B12. This vitamin benefits many other diseases as well. Our bodies need 13 different B vitamins, and B12 can be especially lacking. What’s more, the high sugar diet that many Americans partake of also destroys Vitamin B12 in the intestinal tract. As Natural Society previously reported, one UK doctor is a big fan of B12 – so much so that he has treated all kinds of illnesses with B12 shots. David L. If you are vegan or vegetarian, it can be difficult to get enough B12.