Coconut jam. Jam made from a base of coconut milk, eggs and sugar History[edit] The origin of Kaya Jam is unclear, but it is believed to have been brought over from Portugal during the occupation of Melaka in the 15th century. 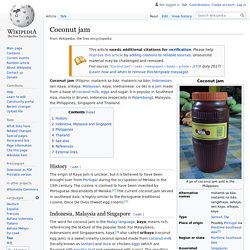 The cuisine is claimed to have been invented by Portuguese descendants of Melaka.[2] The current coconut jam served in southeast Asia, is highly similar to the Portuguese traditional cuisine, Doce De Ovos (Sweet egg cream).[1] Indonesia, Malaysia and Singapore[edit] A close-up of Kaya showing texture Different varieties available include the nyonya kaya, which is of a lighter-green color, and Hainanese kaya, which is of a darker brown and uses caramelized sugar, and is often further sweetened with honey. Philippines[edit] Philippine coconut jam is known as matamís sa báo (also matamís na báo or minatamís na báo, among other names). Thailand[edit] The kaya of Thailand is called sangkhaya (Thai: สังขยา, pronounced [sǎŋkʰàjǎː]) in Thai. 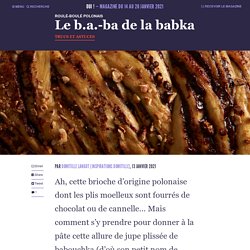 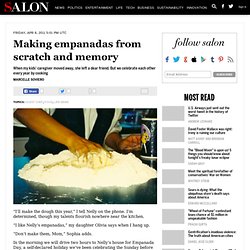 I’m determined, though my talents flourish nowhere near the kitchen. “I like Nelly’s empanadas,” my daughter Olivia says when I hang up. “Don’t make them, Mom,” Sophia adds. In the morning we will drive two hours to Nelly’s house for Empanada Day, a self-declared holiday we’ve been celebrating the Sunday before Thanksgiving for 12 years. “Nelly always does everything. I start the dough making immediately. Nelly and I met more than a decade ago; she was the first and last person to come into my kitchen when I interviewed for caregivers. Johnny hung on my hip the morning I told Nelly I was getting divorced.

One morning, after Nelly had been with us for a year, she came into the kitchen, put on her red apron, and set out three pounds of London broil. I scoop cups of flour into a mound on the counter. On the drive to Nelly’s house the next morning, I pull over and the girls and I run into the Stop ‘N Shop looking for the Goya aisle. Smoked Gouda Gougeres. I picked up a copy of the Autumn edition of Food and Drink magazine the other day. As expected, the focus is on the fruits of the harvest and other foods that Canadians enjoy during the Fall. With cooler temperatures setting in, more substantial and warming foods are favored. The glossy images had me craving many foods at once and I'll be trying several recipes from this issue over the next few months.

One of the first recipes that caught my eye was for black pepper Gouda gougères. For those unfamiliar with the term, gougères are a savory French-style cheese puff that is often made with Gruyère cheese, and sometimes stuffed with other ingredients. How to Make Paneer (Indian Cheese): 7 steps (with pictures) Do you make your own paneer? Home >> Recipes Making your own paneer - the ubiquitous Indian fresh cheese - is easy and great fun. 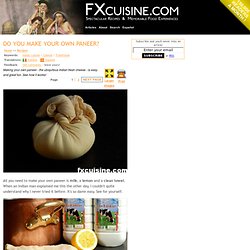 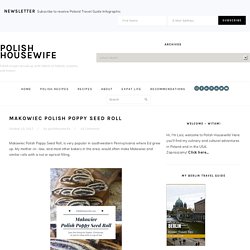 My mother-in- law, and most other bakers in the area, would often make Makowiec and similar rolls with a nut or apricot filling. It’s a must have for Easter and Christmas in Polish homes, but it’s not saved for these special occasions. You might see it offered regularly for drugie śniadanie, second breakfast. It’s jus the time to have with coffee or a cup of tea. Janet recently asked on the PH Facebook page if I had a Makowiec recipe, which prompted this post. Makowiec, especially this truly Polish version, isn’t very sweet, so American palates may prefer it with a little glaze poured over the top to add a little sweetness to each bite. Like all traditional recipes, every family will put their own spin on Makowiec Polish Poppy Seed Roll. Sourdough Discard Recipes Collection. Cupcakes tout tomate & Îles flottantes au concombre et au chèvre. Recette facile : Tartare d'avocat à la tomate.