What students can take away from the first presidential debate. Directions: First, watch the video above for a primer on expectations for each candidate before the debate. 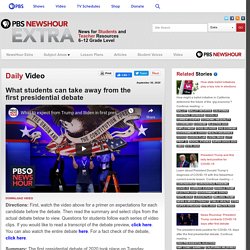 Then read the summary and select clips from the actual debate below to view. Questions for students follow each series of video clips. If you would like to read a transcript of the debate preview, click here. You can also watch the entire debate here. For a fact check of the debate, click here. Summary: The first presidential debate of 2020 took place on Tuesday, September 29 in Cleveland, OH and featured sharp cross talk and a strategy of aggressive interruption by President Trump and attempts to directly address viewers by former Vice President Biden. Discussion: Warm up questions: Who are the two candidates and what are their political backgrounds? Trevor Reacts to the First Biden-Trump Debate. - The Washington Post. 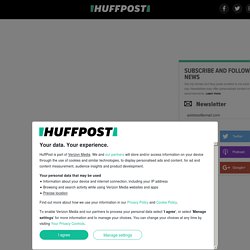 We and our partners will store and/or access information on your device through the use of cookies and similar technologies, to display personalised ads and content, for ad and content measurement, audience insights and product development. Your personal data that may be used Information about your device and internet connection, including your IP address Browsing and search activity while using Verizon Media websites and apps Precise location Find out more about how we use your information in our Privacy Policy and Cookie Policy. QAnon: What is it and where did it come from? US election 2020: Facebook bans more political ads. Image copyrightGetty Images Days after banning ads prematurely declaring victory in the presidential election, Facebook has now banned those questioning the US electoral process. 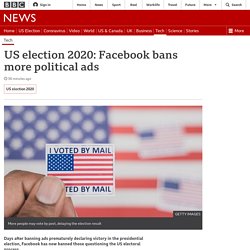 Ads seeking to "delegitimise any lawful method or process of voting" will be banned, amid concerns some may claim postal voting could encourage fraud. It has also removed Trump-sponsored ads claiming accepting refugees would increase the risk of Covid-19. They showed opponent Joe Biden talking about the US border and asylum seekers. And more than 38 versions were seen by hundreds of thousands of people before they were removed. "We don't allow claims that people's physical safety, health or survival is threatened by people on the basis of their national origin or immigration status," Facebook said.

The pandemic is expected to prompt many more people than usual to vote by post in the election. 2020 September 30 BBC One minute World News. The FBI Considers Proud Boys To Be An Extremist Group With Ties To White Nationalism. Marcio Jose Sanchez / AP Gavin McInnes and Proud Boys at a 2017 rally in Berkeley. 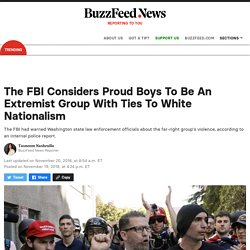 The FBI considers the far-right Proud Boys to be an extremist group with ties to white nationalism, according to a Washington state sheriff's report. In an internal affairs document detailing an investigation into a former deputy sheriff, Erin Willey, for her affiliation with Proud Boys, the Clark County Sheriff's Office said that "the FBI categorizes Proud Boys as an extremist group with ties to white nationalism. " The report was first released to the Guardian by the Property of the People, which describes itself as a "nonprofit organization devoted to governmental transparency. " This is apparently the first time the FBI's classification of the group has been made public. Qui sont les Proud Boys, ce groupe qui cherche à « défendre l'Occident »? 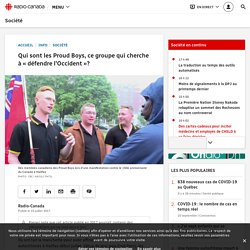 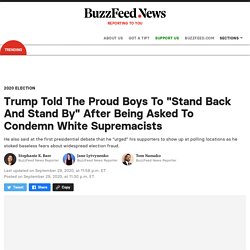 Minutes later, he said he was “urging my people” who are “poll watchers” to go to voting locations across the country — to do what, he wouldn’t exactly say — as he baselessly claimed the election is rife with “fraud.” 2020 09 30 gap. Untitled. 2000+ Common Phrasal Verbs List From A-Z. Phrasal Verbs Example Sentences List of common phrasal verbs with meaning and example sentences. 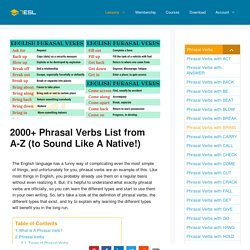 Phrasal Verbs Examples Different drugs act on (affect) different parts of our body in many different ways.Children may act up (cause trouble) in class in an effort to get attention.I will answer for (guarantee) his debt, if he can’t pay on the day.Could you back off (lower the setting of) the volume a bit? How will Trump or Biden win the debate? Anthony Zurcher assesses their strengths and weaknesses. Image copyright Reuters US Democratic presidential nominee Joe Biden has released his tax returns just hours ahead of the first debate with President Donald Trump. 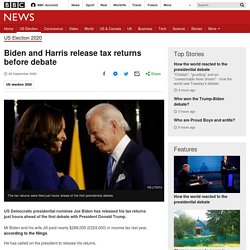 Mr Biden and his wife Jill paid nearly $288,000 (£224,000) in income tax last year, according to the filings. He has called on the president to release his returns. The move follows a report by the New York Times that Mr Trump paid just $750 in income tax in 2016. Mr Trump said the claims were "fake news". Objectivity In Journalism.