US Elections 2020 (Citizenship and Virtual Worlds)

US election 2020: How to become president. US 2020 election: Climate change takes centre stage amid wildfires. Media playback is unsupported on your device On Monday, climate change took centre stage in the US presidential campaign - and the contrast between the two candidates couldn't have been more stark. 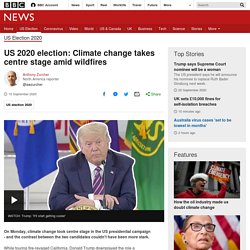 While touring fire-ravaged California, Donald Trump downplayed the role a warming planet could have in the devastation, suggesting temperatures will "start getting cooler" and that the recent conflagrations was a lack of proper forest management. "I don't think science knows actually," he said when told that science didn't agree with his conclusions Meanwhile, on the other side of the country, Joe Biden went on the attack, accusing Trump of ignoring a "central crisis" facing the nation. "If you give a climate arsonist four more years in the White House, why would anyone be surprised if we have more of America ablaze? " Image copyright Getty Images Washington Governor Jay Inslee, who made climate change the focus of his presidential bid, was one of the first to drop out of the race. Build Back Better: Joe Biden’s Jobs and Economic Recovery Plan for Working Families – Joe Biden for President: Official Campaign Website.

Joe Biden believes to his core that there’s no greater economic engine in the world than the hard work and ingenuity of the American people. 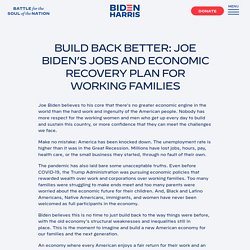 Nobody has more respect for the working women and men who get up every day to build and sustain this country, or more confidence that they can meet the challenges we face. Make no mistake: America has been knocked down. The unemployment rate is higher than it was in the Great Recession. Millions have lost jobs, hours, pay, health care, or the small business they started, through no fault of their own. The pandemic has also laid bare some unacceptable truths. Biden believes this is no time to just build back to the way things were before, with the old economy’s structural weaknesses and inequalities still in place. An economy where every American enjoys a fair return for their work and an equal chance to get ahead. 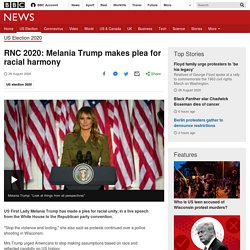 "Stop the violence and looting," she also said as protests continued over a police shooting in Wisconsin. Mrs Trump urged Americans to stop making assumptions based on race and reflected candidly on US history. Donald Trump: Where does the Republican president stand on key issues? US election 2020: A really simple guide. Joe Biden. Joe Biden for President. Joe Biden For President: America Is An Idea. Joe Biden and Kamala Harris say Trump has left US 'in tatters' Media playback is unsupported on your device Democratic presidential candidate Joe Biden and running mate Kamala Harris have attacked "whining" President Donald Trump as an incompetent leader who has left the US "in tatters". 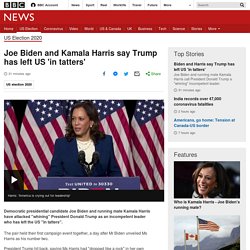 The pair held their first campaign event together, a day after Mr Biden unveiled Ms Harris as his number two. President Trump hit back, saying Ms Harris had "dropped like a rock" in her own presidential bid. Mr Biden will face Mr Trump, a Republican, in November's election. What did Biden say? Wednesday's event at a school in Wilmington, Delaware, was not open to the public, with Mr Biden, 77, citing coronavirus prevention needs. Image copyright Reuters Mr Biden noted that Ms Harris, a US senator from California, was the first woman of colour to serve as a presidential running mate for a major US party. 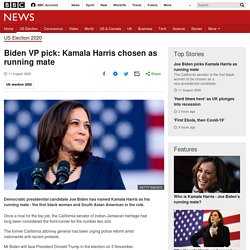 US election 2020: Kanye West launches unconventional bid for presidency. Image copyright Reuters Kanye West has officially launched his campaign for the 2020 US presidential election, with an unorthodox rally in Charleston, South Carolina. 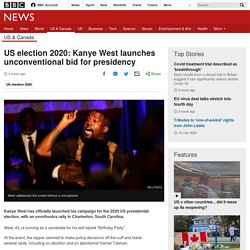 West, 43, is running as a candidate for his self-styled "Birthday Party". At the event, the rapper seemed to make policy decisions off-the-cuff and made several rants, including on abortion and on abolitionist Harriet Tubman. Fans have questioned whether his last-minute bid for the White House is actually a promotional stunt. The Charleston rally did little to clarify whether his run is genuine.

The event, held at a wedding and conference hall in the city, was said to be open to registered guests only - but West's campaign website had no function for people to register or RSVP. How Does the U.S. Presidential Election Process Work? Does your vote count? The Electoral College explained - Christina Greer. How do they work? US election 2020 : All you need to know about the presidential race. Image copyright Getty Images. 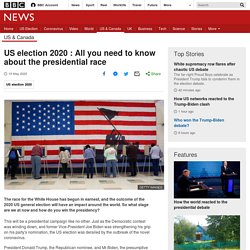 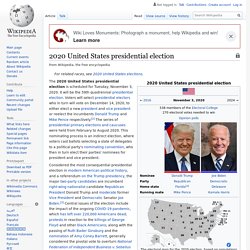 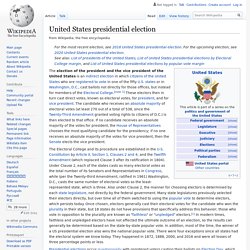 [note 1] These electors then in turn cast direct votes, known as electoral votes, for president, and for vice president. The candidate who receives an absolute majority of electoral votes (at least 270 out of a total of 538, since the Twenty-Third Amendment granted voting rights to citizens of D.C.) is then elected to that office. Win the White House. The Politician: Season 2. Official Trailer. Who could be Joe Biden's running mate? During the final Democratic primary debate in March, Joe Biden pledged that if he were to win the party's presidential nomination, he would choose a woman as his running mate. 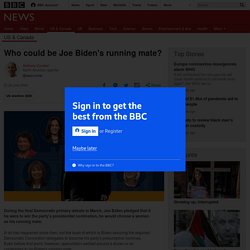 A lot has happened since then, not the least of which is Biden securing the required Democratic Convention delegates to become his party's presumptive nominee. Even before that point, however, speculation swirled around a dozen or so contenders to be Biden's running mate. Buzz around the various candidates has risen and fallen as the nation has been buffeted by a viral pandemic, economic disruption and mass protests and racial tension.