Factitious FAKE OR NOT? - A QUIZ 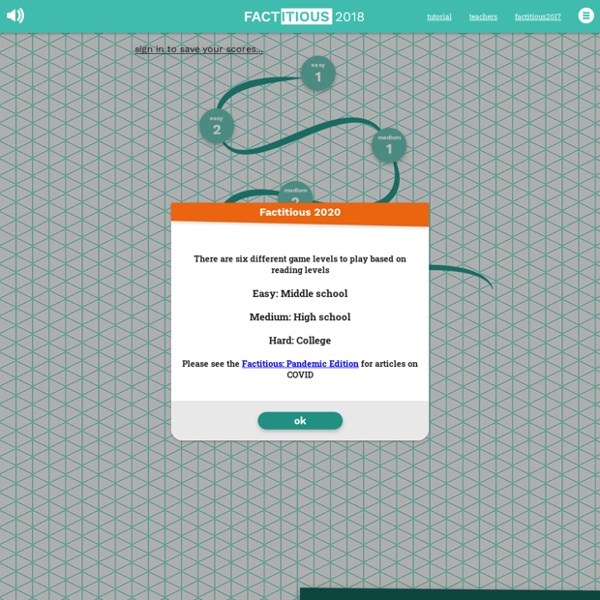 Week Numbers for 2021 This page lists all weeks in 2021. There are 52 weeks in 2021. All weeks are starting on Monday and ending on Sunday. Fake News - Fake News & Fact Checking - Research Guides at Sonoma State University 1. It can't be verified A fake news article may or may not have links in it tracing its sources; if it dos, these links may not lead to articles outside of the site's domain or may not contain information pertinent to the article topic. 2. Fake news appeals to emotion Fake news plays on your feelings - it makes you angry or happy or scared.

An Engaging Word Game Helps Students Grasp Implicit Bias As part of an effort to demonstrate the effect of implicit bias, library media specialist Jacquelyn Whiting devised an exercise that looks similar to “Mad Libs,” the popular fill-in-the-blank word game. In EdSurge’s “Everyone Has Invisible Bias. This Lesson Shows Students How to Recognize It,” Whiting describes how she removed words from a New York Times opinion essay to create a new, highly engaging activity for a 10th-grade class. Jacquelyn Whiting

How To Spot Fake News Critical thinking is a key skill in media and information literacy, and the mission of libraries is to educate and advocate its importance. Discussions about fake news has led to a new focus on media literacy more broadly, and the role of libraries and other education institutions in providing this. When Oxford Dictionaries announced post-truth was Word of the Year 2016, we as librarians realise action is needed to educate and advocate for critical thinking – a crucial skill when navigating the information society. IFLA has made this infographic with eight simple steps (based on FactCheck.org’s 2016 article How to Spot Fake News) to discover the verifiability of a given news-piece in front of you. Download, print, translate, and share – at home, at your library, in your local community, and on social media networks. The more we crowdsource our wisdom, the wiser the world becomes.

Video and a related lesson plan from TEDEd. Update: Please also see our new, 2017 lesson, Evaluating Sources in a ‘Post-Truth’ World: Ideas for Teaching and Learning About Fake News _________ How do you know if something you read is true? Why should you care? A guide to fighting lies, fake news, and chaos online AA few months ago, I got angry about something on Twitter. Somebody had tweeted a photo of a paper sign in an apartment building, informing tenants that using the elevator would soon cost $35 a month. It was surprising, but on a gut level, exactly the kind of behavior I’d expect from a greedy landlord — the kind of thing that’s easy to furiously retweet without thinking. Web Literacy for Student Fact-Checkers Evaluating news sources is one of the more contentious issues out there. People have their favorite news sources and don’t like to be told that their news source is untrustworthy. For fact-checking, it’s helpful to draw a distinction between two activities: News Gathering, where news organizations do investigative work, calling sources, researching public documents, checking and publishing facts, e.g. the getting the facts of Bernie Sanders involvement in the passage of several bills.News Analysis, which takes those facts and strings them into a larger narrative, such as “Senator Sanders an effective legislator behind the scenes” or “Senator Sanders largely ineffective Senator behind the scenes.” Most newspaper articles are not lists of facts, which means that outfits like The Wall Street Journal and The New York Times do both news gathering and news analysis in stories. Narratives are a different matter.

SIFT (The Four Moves) How can students get better at sorting truth from fiction from everything in between? At applying their attention to the things that matter? At amplifying better treatments of issues, and avoiding clickbait? Since 2017, we’ve been teaching students with something called the Four Moves. Our solution is to give students and others a short list of things to do when looking at a source, and hook each of those things to one or two highly effective web techniques. We call the “things to do” moves and there are four of them:

This is a fun game that can be played with students to demonstrate how easy it is to be fooled by media, and even can be used to test the skills learned during information literacy lessons. by alyrayj Nov 3