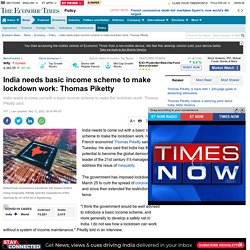 He also said that India has the potential to become the global democratic leader of the 21st century if it manages to address the issue of inequality. The government has imposed lockdown from March 25 to curb the spread of coronavirus and since then extended the restrictions twice. COVID-19: Brazil implements basic income policy following massive civil society campaign. Like many crises, the coronavirus pandemic has served to make social and economic inequalities more evident around the world, often in very harsh ways. 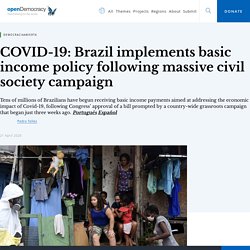 In Brazil, which has officially recorded 28,320 cases and 1,736 deaths as of 17 April (with actual figures likely to be 12 times higher), the poorest and most marginalized have been worst affected, with less wealth and fewer resources to draw on to protect themselves, their health and their livelihoods. New study reveals most Europeans support basic income after COVID-19. The COVID-19 pandemic is inspiring Europeans to think the previously unthinkable, according to a ground-breaking survey out today from a team led by Professor Timothy Garton Ash, the leading Oxford academic. 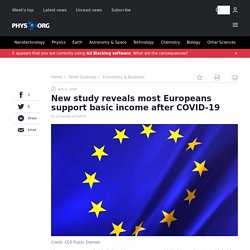 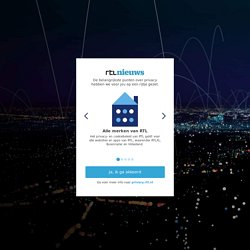 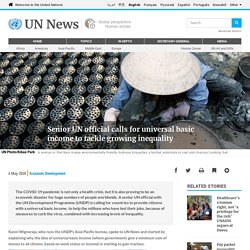 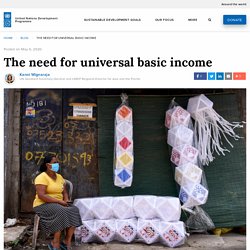 So bolder ideas are needed including some, that previously, were pushed aside. At UNDP, we’re saying that, if there isn’t a minimum income floor to fall back on when this kind of massive shock hits, people literally have no options. Without the means to sustain themselves, they are far more likely to succumb to hunger or other diseases well before COVID-19 gets to them. Millions and millions of people are now out of a job. Has the time come for a universal basic income? John Harris rightly points out that the need for a universal basic income is increasingly compelling (Why universal basic income could help us fight the next wave of economic shocks, 3 May). 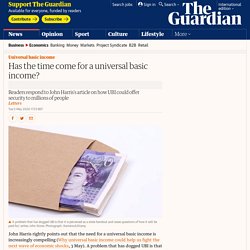 A problem that has dogged UBI is that it is perceived as a state handout and raises questions of how it will be paid for. But there is a morally just means of financing a basic income for all. Land is a gift of nature (the commons), which over the course of history has been appropriated into private ownership by the ruling minorities. Finnish basic income pilot improved wellbeing, study finds.

Europe’s first national, government-backed basic income experiment did not do much to encourage recipients into work but did improve their mental wellbeing, confidence and life satisfaction, according to the first big study of a Finnish scheme that has attracted fresh interest in the coronavirus outbreak. 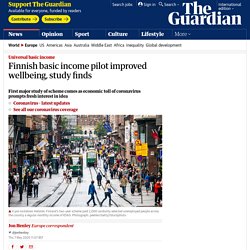 “The basic income recipients were more satisfied with their lives and experienced less mental strain than the control group,” the study, by researchers at Helsinki University, concluded. “They also had a more positive perception of their economic welfare.” Latest Report on Finland's Universal Basic Income Trial Says It Makes People Happier. Freely giving away money to thousands of people with no strings attached was always going to make Finland's 2017 Basic Income experiment a focus of study for sociologists, psychologists, politicians and economists for years to come. 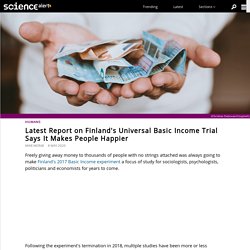 Following the experiment's termination in 2018, multiple studies have been more or less consistent in their conclusions. People tend to be happier and more confident, but aren't necessarily keen to hit the pavement in search of employment. This latest report published by the Finnish Ministry of Social Affairs and Health doesn't make any challenging new claims. But at a time when the world is in the grip of an employment calamity, its conclusions are a timely reminder to reconsider the benefits of economic safety nets. Jordan Peterson on Universal Basic Income.. 'Money ISN'T the Problem!' Gyeonggi to offer universal basic income to marriage immigrants, permanent residents.

The Gyeonggi provincial government will offer universal basic income to marriage immigrants and permanent residents amid the COVID-19 pandemic. 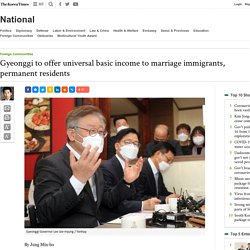 Governor Lee Jae-myung said Sunday that F-5 and F-6 visa holders will also be eligible to receive 100,000 won ($82) just like Korean citizens. Initially, all foreigners were excluded from access to the benefit. "It would be difficult to offer the relief money to all foreigners, such as undocumented ones and short-term visitors," Lee said on Facebook. "However, marriage immigrants are spouses of Korean citizens and it is a trend that permanent residents around the world are not discriminated against when it comes to such benefit. " South Africa: Big - There's an Urgent Need for a Basic Income Grant for the Unemployed. As the Covid-19 crisis bites deeper, the time has come to give serious consideration to policy proposals made since 2000: for a targeted or universal basic income grant for unemployed individuals between the ages of 18 and 59 years. This would include informal traders and daytime piecemeal job-seekers.

South Africa, like the rest of the world, is facing both a health and economic pandemic as the cataclysmic event of Covid-19 sows havoc. As we all seek to contain the devastation, the poor and most vulnerable are feeling the impact far worse than we can imagine. At this defining moment for our collective consciousness, urgent intervention is needed. Why South Africa needs basic income support now. People queue for social grants outside the Sassa office in Eerste River. (Archive photo: Ashraf Hendricks) First published by GroundUp The expansion of social grants can be viewed as one of the greatest post-1994 redistributive achievements in South Africa. Spain is moving to establish permanent basic income in the wake of the coronavirus pandemic.

COVID-19: Brazil implements basic income policy following massive civil society campaign. Canada: time for a Basic Income? Canada is taking measures to face the Covid-19 pandemic. The situation requires, together with radical and fast actions in medical terms, radical and fast actions in economic and social terms. The introduction of a Basic Income has been a topic for years in Canad,a and with the current crisis it is showing even more its future possible benefits.

On the 18 March the Prime Minister, Justin Trudeau, announced the federal response to the crisis: a $82 billion relief plan which allocates $27 billion in direct support and $55 billion to help businesses liquidity through tax deferrals. So far, the Opposition parties have been supportive, especially the New Democratic Party which is pushing the Government for more generous and comprehensive measures. The Canada’s Covid-19 Economic Response Plan includes a temporary boost to Canada’s Child Benefit payments, a new emergency Care Benefit to provide income support to workers, the Canada emergency response Benefit (CERB) and other targeted measures. Is this the moment for universal basic income? Until now, universal basic income – a concept that would give all members of society an unconditional, guaranteed cash payment – has received limited attention among U.S. policymakers. But the coronavirus pandemic may change all that, says Stanford historian Jennifer Burns.

Jennifer Burns, associate professor of history, says a universal basic income program could help protect workers who have hit rock bottom. (Image credit: Courtesy Jennifer Burns) Coronavirus crisis could pave the way to a universal basic income. A woman wearing a sanitary mask as a preventive measure, leaving the train during the first day of work for non-essential sectors. Barcelona faces its 31st day of house confinement due to the contagion of Covid-19. Paco Freire | SOPA Images | LightRocket via Getty Images. The Pope Just Endorsed Universal Basic Income. In an Easter letter to world leaders, Pope Francis opined that “this may be the time to consider a universal basic wage which would acknowledge and dignify the noble, essential tasks you carry out.” “It would ensure and concretely achieve the ideal, at once so human and so Christian, of no worker without rights,” the Pope argued.

In the letter, Francis argued that many workers, including “street vendors, recyclers, carnies, small farmers, construction workers, dressmakers, the different kinds of caregivers” were being “excluded from the benefits of globalization,” while “the lockdowns are becoming unbearable.” Coronavirus has made basic income not just desirable but vital. COVID-19 could tip our fragile economic system into a depression. Means testing benefits creates a poverty trap discouraging people from taking work. The case for a universal basic income is stronger than ever. Britain has never come close to creating a robust income floor, and the coronavirus crisis has shown that many still fall through what is an imperfect, mean and patchy system. Photo: PA. Andrew Yang Talks Project100: $100 Million Planned Of Universal Basic Income During COVID-19. Today, the US witnesses the launch of Project100: a $100 million effort to rapidly send $1,000 in direct cash payments to 100,000 SNAP (food stamp) recipient families, who have been hard hit by the COVID-19 crisis.

Recipients include individuals like Maureen — a recently unemployed mother of two looking for housing and grieving the loss of her 39 year-old husband, who passed away due to COVID-related complications on March 6th. She signed up for the $1,000 gift (after overcoming fears it was a “free money” scam) via technology company Propel’s Fresh EBT app, and received the full amount in a matter of hours. “Antiquated government technology has delayed assistance for tens of millions of families. We all need to pull together and serve as many families and children as we can reach” said Stacey Abrams, one of the many conveners of Project100.