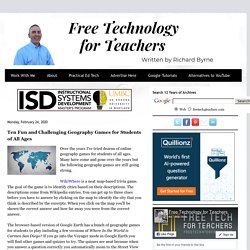 Many have come and gone over the years but the following geography games are still going strong. WikiWhere is a neat map-based trivia game. The goal of the game is to identify cities based on their descriptions. The descriptions come from Wikipedia entries. You can get up to three clues before you have to answer by clicking on the map to identify the city that you think is described by the excerpts. The browser-based version of Google Earth has a bunch of geography games for students to play including a few versions of Where In the World is Carmen San Diego? GameOn World is a multiplayer geography game developed by a high school teacher and his student in Portland, Maine. 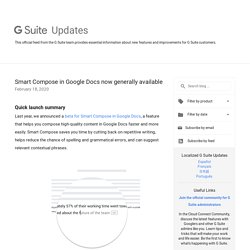 Annenberg Classroom – Resources For Excellent Civics Education. Model Diplomacy. 1619 Project (New York Times) In the history of the United States, black Americans were the only group for whom it was ever illegal to learn to read or write. 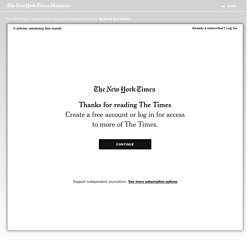 And so when emancipation finally came, schools and colleges were some of the first institutions that the freed people clamored to build. Black Americans believed that education meant liberation, and just eight months after the Civil War, the first historically black college opened in the South. Howard University is among the most venerable of these institutions. Chartered in Washington in 1867, the school has educated some of the nation’s most notable black Americans, including Toni Morrison, Andrew Young, Zora Neale Hurston and Paul Laurence Dunbar. But where Howard has had perhaps the most indelible impact on black lives — and on the country — has been its law school. Race to Ratify.

Explore Popular Debates, Discussions and Critical Thinking. Printable Maps. Teaching and Learning About Martin Luther King Jr. With The New York Times. … We returned to King’s letter, in which he draws a distinction between just and unjust laws. 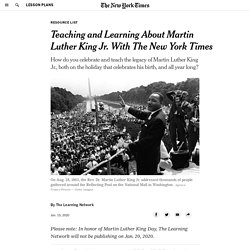 They didn’t know about this King, I found, the one who fought the law. In their view, the civil rights movement was embodied in King the Christlike leader, who stands for peace, love and brotherhood.I told the students that King went to jail a lot for peace, love and brotherhood.We talked about Baltimore, where the police had just killed Freddie Gray and street protests were swelling to an uprising. My students were skeptical of headlines and commentary that called for nonviolent protest. One of the students noted that the police were violent, too, and they were placing people in mortal danger just to protect some buildings from being damaged.

Working With Media in Social Studies

Backchannel Discussion Tools. Kialo Edu - The tool to teach critical thinking and rational debate. Tarr's Toolbox. Model diplomacy. The 1619 Project. In August of 1619, a ship appeared on this horizon, near Point Comfort, a coastal port in the English colony of Virginia. 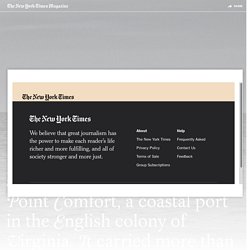 It carried more than 20 enslaved Africans, who were sold to the colonists. No aspect of the country that would be formed here has been untouched by the years of slavery that followed. On the 400th anniversary of this fateful moment, it is finally time to tell our story truthfully. The 1619 ProjectThe 1619 Project is an ongoing initiative from The New York Times Magazine that began in August 2019, the 400th anniversary of the beginning of American slavery. Race to Ratify. Annenberg Classroom – Resources For Excellent Civics Education.