QUIZ of the WEEK 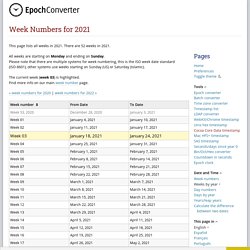 There are 52 weeks in 2021. All weeks are starting on Monday and ending on Sunday. Please note that there are multiple systems for week numbering, this is the ISO week date standard (ISO-8601), other systems use weeks starting on Sunday (US) or Saturday (Islamic). The current week (week 03) is highlighted. News you can trust chart. A guide to fighting lies, fake news, and chaos online. AA few months ago, I got angry about something on Twitter. 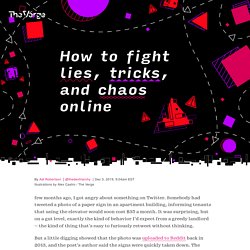 Somebody had tweeted a photo of a paper sign in an apartment building, informing tenants that using the elevator would soon cost $35 a month. It was surprising, but on a gut level, exactly the kind of behavior I’d expect from a greedy landlord — the kind of thing that’s easy to furiously retweet without thinking. But a little digging showed that the photo was uploaded to Reddit back in 2013, and the post’s author said the signs were quickly taken down. The building manager denied writing them to both the author and a reporter, suggesting that this was either a prank or an immediately abandoned plan. Retweeting the photo would have just outraged people about something that had seemingly never happened. This kind of viral half-truth is part of the fabric of today’s internet, and the kind of anger it inspired has been turned into a dangerous commodity.

I don’t want to blame people who fall for these tricks. Looking Deeper. Untitled. True or false? How to spot fake news. Reality Check. US President Donald Trump has said that Democratic-run states - known as blue states - are to blame for America's high coronavirus death toll. 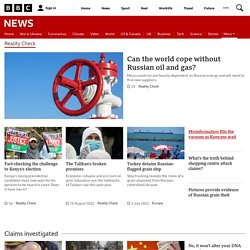 “If you take the blue states out,” Mr Trump said at a White House briefing earlier this week, “we’re at a level that I don’t think anybody in the world would be at. We’re really at a very low level.” He repeated a similar claim at a rally in Wisconsin on Thursday. “Take New York and some of these other Democrat-run states out of it, you’ll see numbers that are unbelievable.” The Democratic National Committee tweeted in response: “Covid isn't a red state or blue state issue.”

Out of the five states that have the largest numbers of coronavirus deaths two are Republican-run "red states" - Texas and Florida. It's true that in the early stage of the outbreak states run by the Democrats like New York and New Jersey were the worst hit. But as the pandemic has progressed, Republican-led states have contributed a greater proportion of fatalities. Media Bias/Fact Check - Search and Learn the Bias of News Media.

VOC les medias. 24 Hours in a Newsroom / Home. NEWS REVIEW 2019 2020. BBC news .pdf. Compréhension orale. US Elections. Impeachment. Yellow journalism. Yellow journalism, or the yellow press, is a type of journalism that presents little or no legitimate well-researched news and instead uses eye-catching headlines to sell more newspapers.[1] Techniques may include exaggerations of news events, scandal-mongering, or sensationalism.[1] By extension, the term yellow journalism is used today as a pejorative to decry any journalism that treats news in an unprofessional or unethical fashion.[2] Definitions Joseph Campbell defines yellow press newspapers as having daily multi-column front-page headlines covering a variety of topics, such as sports and scandal, using bold layouts (with large illustrations and perhaps color), heavy reliance on unnamed sources, and unabashed self-promotion. 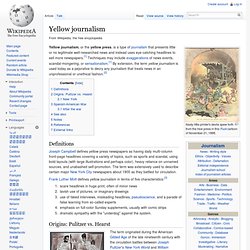 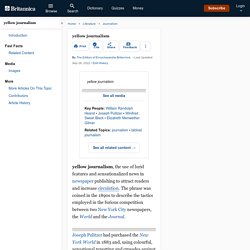 The phrase was coined in the 1890s to describe the tactics employed in furious competition between two New York City newspapers, the World and the Journal. Joseph Pulitzer had purchased the New York World in 1883 and, using colourful, sensational reporting and crusades against political corruption and social injustice, had won the largest newspaper circulation in the country. His supremacy was challenged in 1895 when William Randolph Hearst, the son of a California mining tycoon, moved into New York City and bought the rival Journal. Hearst, who had already built the San Francisco Examiner into a hugely successful mass-circulation paper, soon made it plain that he intended to do the same in New York City by outdoing his competitors in sensationalism, crusades, and Sunday features.