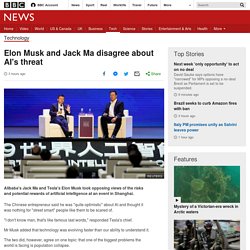 The Chinese entrepreneur said he was "quite optimistic" about AI and thought it was nothing for "street smart" people like them to be scared of. "I don't know man, that's like famous last words," responded Tesla's chief. Mr Musk added that technology was evolving faster than our ability to understand it. The two did, however, agree on one topic: that one of the biggest problems the world is facing is population collapse. 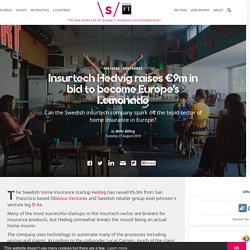 Many of the most successful startups in the insurtech sector are brokers for insurance products, but Hedvig somewhat breaks the mould being an actual home insurer. The company uses technology to automate many of the processes including pricing and claims. According to the cofounder Lucas Carlsén, much of the claim process is already automated. “It means that if you lose your laptop in Copenhagen, you would open the Hedvig app to record a voice message.

From that voice message we can determine what happened and then trigger an automatic payoff, which would happen in a couple of minutes,” Carlsén tells Sifted. Application fraud dominates as average tops £12,000 per case. Insurtech Honcho ready to take on aggregators as it steps into motor market. Motor claims inflation in the UK surges by over 8% in 2018. North West England maintains its position as the region with the highest average cost per claim (ACPC), at £5,403 in 20181. 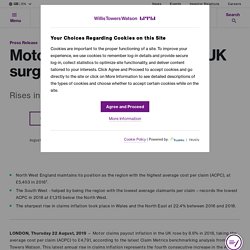 The South West - helped by being the region with the lowest average claimants per claim – records the lowest ACPC in 2018 at £1,315 below the North West. The sharpest rise in claims inflation took place in Wales and the North East at 22.4% between 2016 and 2018. LONDON, Thursday 22 August, 2019 — Motor claims payout inflation in the UK rose by 8.6% in 2018, taking the average cost per claim (ACPC) to £4,791, according to the latest Claim Metrics benchmarking analysis from Willis Towers Watson. 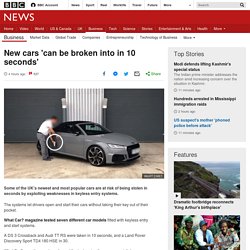 Some of the UK's newest and most popular cars are at risk of being stolen in seconds by exploiting weaknesses in keyless entry systems. The systems let drivers open and start their cars without taking their key out of their pocket. What Car? Magazine tested seven different car models fitted with keyless entry and start systems. A DS 3 Crossback and Audi TT RS were taken in 10 seconds, and a Land Rover Discovery Sport TD4 180 HSE in 30. What Car? Hundreds of popular cars 'at risk of keyless theft' They measured the time it took to get into the cars and drive them away. Car theft rates in England and Wales have reached an eight-year high. And motor theft insurance claim payouts hit their highest level in seven years at the start of 2019. The Association of British Insurers said claims for January to March were higher than for any quarter since 2012. InsurTech platform partners with Lloyds Banking Group. AXA and GoCompare partner to cover excess for motorists.

The deal means that eligible customers will get up to £250 back towards any excess fees, for accidents in which they are at fault, claims for fire and theft or damage caused by uninsured drivers*. 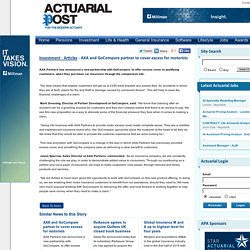 This will help to ease the financial challenges of a claim. Mark Greening, Director of Partner Development at GoCompare, said: “We know that claiming after an accident can be a gruelling process for customers and they don’t always realise that there is an excess to pay. Insurers warn of Ogden impact amid latest premium data. GoCompare sees profits halved in H1, hints at exploring new sectors. New rules set to help travellers with medical conditions access insurance. Google: Brokers are an important part of the value chain - Insurance Age. We talk with David Black, MD financial services at Google UK, about how the tech giant sees insurance evolving, disruption, and the place for brokers in a tech-led world. 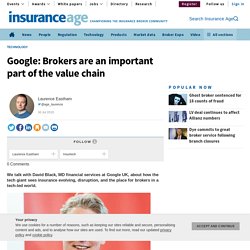 Tech disruption is a topic on everyone’s lips. It feels like a tech-enabled product or InsurTech is being launched every day, with the pace of change only increasing. Google is one big name that has taken a keen interest in the potential for technological innovation in the insurance industry. What lessons are to be learnt for extreme weather claims following Whaley Bridge? Insurance black boxes and the surveillance state – how free are you, really? Over the last few years there’s been a noticeable rise in the number of drivers opting to fit a “black box” to their cars in order to obtain cheaper insurance. 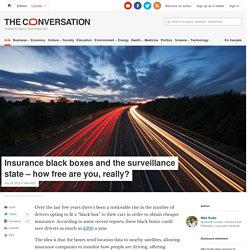 According to some recent reports, these black boxes could save drivers as much as £300 a year. The idea is that the boxes send location data to nearby satellites, allowing insurance companies to monitor how people are driving, offering discounts and even refunds to those deemed to be driving more safely. As a result, black box drivers tend to drive quite cautiously, avoiding fast acceleration and never exceeding the speed limit, wherever they happen to be. While this type of driving can be rather annoying to more experienced drivers, the whole concept of the “black box” exposes some fundamental truths about the way rules work.

These bumper stickers put into words a process that we all tacitly accept on a day-to-day basis, but never quite admit. Rules, codes and conventions.