8 mistakes that can ruin your video job interview. IBM-Top-Priorities-Outperformer-CEOs-Feb2021. Want to Win Someone Over? Talk Like They Do. What does it take to become a more convincing communicator? 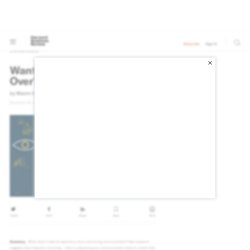 New research suggests that linguistic mirroring — that is, adjusting your communication style to match that of your audience — is an effective tool to increase your ability to influence... Spain triathlete gives up medal to rival who went wrong way. Image copyright Getty Images A Spanish athlete is being applauded on social media after he sacrificed a top tier win in the 2020 Santander Triathlon to give it to a competitor who took a wrong turn on the course. 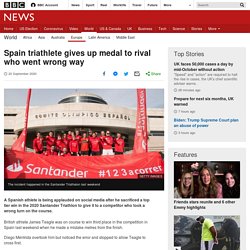 British athlete James Teagle was on course to win third place in the competition in Spain last weekend when he made a mistake metres from the finish. LinkedIn co-founder reveals key secret to success. Four tips from elite sport you can use in everyday life - BBC Ideas. 4 Ways to Improve Your Strategic Thinking Skills. Executive Summary If you believe that strategic thinking is only for senior executives, think again. 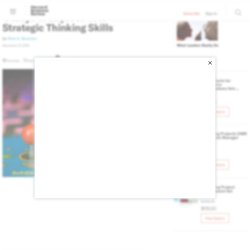 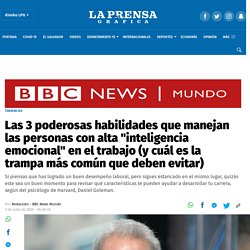 Is this the secret of smart leadership? - BBC Worklife. Amy Yi Ou at the Hong Kong Polytechnic University has found similar benefits in a study of 105 technology companies. 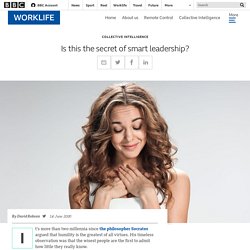 Using surveys similar to Owens’, she found that humbler CEOs encouraged greater collaboration and information sharing among the firm’s top management team. The improved decision making resulted in greater overall profits. Goals vs. Strategy. Roselinde Torres: What it takes to be a great leader. A Segment of One: The new reality. Consumers now have access to all the information they need to define, compare and select the financial products and services that best serve their individual needs. 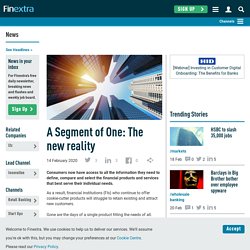 As a result, financial institutions (FIs) who continue to offer cookie-cutter products will struggle to retain existing and attract new customers. Gone are the days of a single product fitting the needs of all. Financial institutions need to focus on satisfying the individualised needs of the new consumer. Persuade con tu voz. Estrategias para sonar creíble. The Why was born out of pain. Entrevista al Dr. Viktor Frankl. El sentido de la vida. In the Ecosystem Economy, What’s Your Strategy? When Nestlé was preparing to go mainstream with Nespresso, its single-use espresso capsule, it knew that users would need a machine specifically designed to work with the pod. 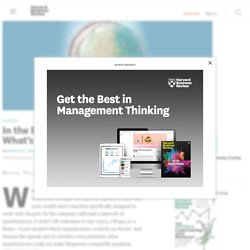 So the company cultivated a network of manufacturers. It didn’t tell customers to buy a Jura, a Krups, or a Braun—it just decided which manufacturers could be on the list. And because the capsule and its interface were patented, other manufacturers could not make Nespresso-compatible machines without permission. Nespresso was creating—designing—an ecosystem: an orchestrated network spanning multiple sectors. The firms involved work to shared standards, sometimes on a shared platform, to make their products and services compatible. Why Groups Struggle to Solve Problems Together. Executive Summary There are five stages of problem solving: defining the problem, generating solutions, evaluating solutions, picking a solution, and making a plan. 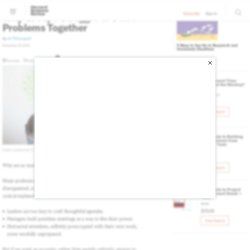 When we solve problems on our own, we intuitively move in between these stages to quickly generate solutions. We assume this method will also work in group settings, however, it often fails because each person could be occupying a different problem solving stage at the same time (essentially, no one is on the same page — even though they think they are). To solve problems as a group, we need to jettison the assumption that intuitive problem solving is sufficient, and instead embrace a more methodical approach. In a methodical meeting, for each issue that needs to be discussed, members deliberately and explicitly choose just one problem-solving stage to complete.

On the inside of a hacking catastrophe. Image copyright David Rimmer In early September 2017 David Rimmer was on the final day of a corporate get-together in the US, organised by Equifax, the giant financial firm he worked for. 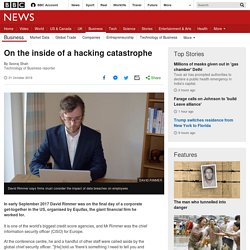 It is one of the world's biggest credit score agencies, and Mr Rimmer was the chief information security officer (CISO) for Europe. Barack Obama challenges 'woke' culture. Netflix founder: 'Learn when to get out of the way' Why is Windows 10 a mess? Ex-Microsoft engineer blames the culture of 'made-men' X Learn More Windows 10 version 1909: Why this feature update should be a pleasant surpriseMicrosoft is getting the November 2019 Update ready for release to the general public. 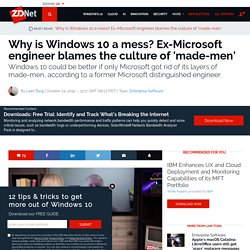 These included the chief executives of Amazon, American Airlines, and America's biggest bank, JPMorgan Chase. 'Fall in love with the problem not the solution' Warren Buffett Says This Is the Most Important Leadership Trait You Should Have. Buffett has been telling us about the importance of one non-negotiable trait you should find in people: integrity. The Oracle of Omaha said: We look for three things when we hire people. What's the best way to stay awake in meetings? Image copyright Getty Images US Commerce Secretary Wilbur Ross is reportedly prone to dozing off in meetings. The dos and don'ts of getting a pay rise. Image copyright Getty Images How much are you worth? Or rather - is the answer to that question equal to the sum paid into your bank account by your employer? What a pleasure to present my views on digital disruption to entrepreneurs from black umbrella today at MTN's HQ ...

Several cabinet ministers told the BBC that she cannot stay, with one saying it is "the end of the line". Tory backbenchers met on Wednesday evening, but decided not to change rules which would have allowed an immediate vote of no confidence in her. The BBC's political editor says the PM seems to have bought herself 36 hours. 'Delegate everything to your team' Pope Francis makes it mandatory for clergy to report sex abuse. Image copyright AFP Pope Francis has made it mandatory for Roman Catholic clergy to report cases of clerical sexual abuse and cover-ups to the Church.

In an Apostolic letter, which is set to become Church law, he makes clear that any sexual advance involving the use of power will now be considered abusive. The mental rigours of being US president. Microsoft: What went right under Satya Nadella? Staying Focused on the Business Priorities that Matter Most. The art of the deal: Negotiators' secrets revealed. Image copyright Getty Images.