Wenn Google zum Oberchefredakteur wird. In the war of fake news versus facts, here's what the next battle should be. Publishers see new life in the old open web. After years of focusing on producing content for the latest hot app, investors, tech leaders and newsrooms are starting to pay renewed attention to publishing on the open web, where independent publishers have more control over data and distribution. 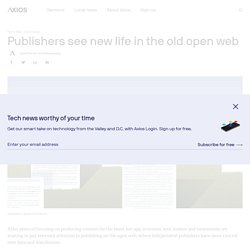 The big picture: The open web — content that's accessible via any web browser, easily linked to, and doesn't require logging in to an account — is winning new attention even as "walled garden" apps like Facebook continue to dominate online distribution and the Google and Facebook duopoly controls most of the digital ad market. Facts won't fix this: experts on how to fight America's disinformation crisis. How to solve information chaos online? Experts cite these structural solutions.

Social media: How might it be regulated? 250 recommendations on how to stop “infodemics” As false or manipulated information continues to proliferate online during the Covid-19 epidemic, the Forum on Information and Democracy is publishing a report entitled How to end infodemics. 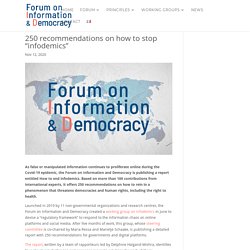 Based on more than 100 contributions from international experts, it offers 250 recommendations on how to rein in a phenomenon that threatens democracies and human rights, including the right to health. Launched in 2019 by 11 non-governmental organizations and research centres, the Forum on Information and Democracy created a working group on infodemics in June to devise a “regulatory framework” to respond to the information chaos on online platforms and social media. After five months of work, this group, whose steering committee is co-chaired by Maria Ressa and Marietje Schaake, is publishing a detailed report with 250 recommendations for governments and digital platforms. platform transparencycontent moderationpromotion of reliable news and informationprivate messaging services. Facebook Is the ‘Mainstream Media’ Now. 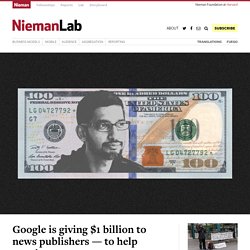 Google’s going to spend $1 billion over the next three years paying publishers for their news. Specifically, the money will license publishers’ content for a new feature in Google News called Google News Showcase. Facebook auditors call out Mark Zuckerberg for ‘vexing and heartbreaking decisions’ A team of civil rights auditors has delivered a scathing and unexpected indictment of Facebook’s recent moderation choices after a two-year examination of the platform’s practices and internal policies. 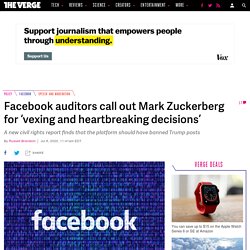 “While the audit process has been meaningful and has led to some significant improvements in the platform,” the report reads, “we have also watched the company make painful decisions over the last nine months with real world consequences that are serious setbacks for civil rights.” Published on Wednesday, the auditors’ final report is the result of an independent investigation by civil rights lawyers, conducted with Facebook’s active assistance.

That investigation has produced two previous reports that examined voter suppression and algorithmic discrimination. Facebook agreed to undertake the audit and make the reports public after significant pressure from activist groups. DEEP RECKONINGS: Zuckerberg. Facebook leaks show Mark Zuckerberg defending his decisions to angry employees. In its aftermath, Zuckerberg held another virtual meeting with employees, describing a seven-point plan to address their concerns. 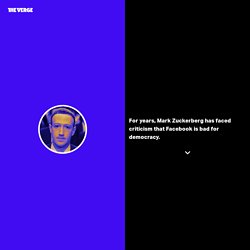 Facebook would reexamine its content policies, consider adding new labels to problematic posts, and introduce a new information hub encouraging people to vote. The CEO acknowledged that, as a result of his decision, Facebook’s public image had taken another hit. “Likely this decision has incurred a massive practical cost for the company to do what we think is the right step,” he said. Meanwhile, a growing number of employees was questioning the influence of its most prominent conservative executives over how the company developed and enforced policies in cases like these. 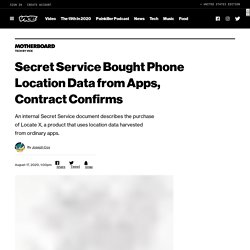 The modern dilemma of TikTok journalism. This week, Bloomberg reported that members of Joe Biden’s presidential campaign were instructed to delete the social media app TikTok from their phones. 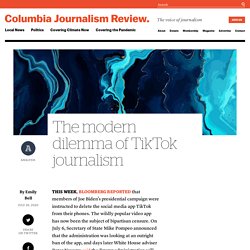 The wildly popular video app has now been the subject of bipartisan censure. On July 6, Secretary of State Mike Pompeo announced that the administration was looking at an outright ban of the app, and days later White House adviser Peter Navarro said the Trump administration will take “strong action” against it and WeChat for “engaging in information warfare against the US.” As analysts have pointed out, “banning” TikTok lies beyond the realm of possibility for the current US government, but the saber-rattling against the soft power of software accountable to the Chinese government is likely to get louder. Why is ad tech paying US$25 million to COVID-19 disinfo sites? – GDI. Household brands are inadvertently funding disinformation sites to spread COVID-19 conspiracies, thanks to ad tech companies that do not effectively screen the sites to which they provide ads services. 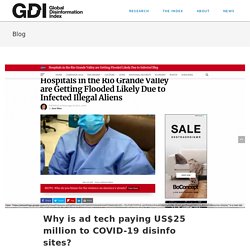 New research from the Global Disinformation Index (GDI) shows that Google, Amazon and other tech companies are paying COVID-19 disinformation sites at least US$25 million in ad revenues to carry ads for well-known brands such as Bloomberg News, Crest Toothpaste, L’Oreal, Made.com, Merck and many others. Figure 1: Ad revenues paid by tech companies to COVID-19 disinfo sites We have analysed nearly 500 ad-supported, high-traffic web disinformation sites with a high concentration of COVID-19 conspiracy content. ACCC commissioned report The impact of digital platforms on news and journalistic content, Centre for Media Transition (2)

ACCC commissioned report The impact of digital platforms on news and journalistic content, Centre for Media Transition (2) How May Google Fight an Antitrust Case? Look at This Little-Noticed Paper. Google controls products that aid in every step of that process, including the different pieces of software for advertisers and publishers that run auctions for ad space. 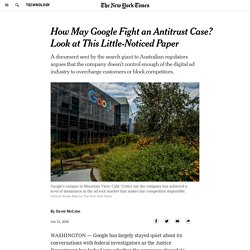 Because publishers sometimes post their open ad space to multiple digital ad companies — including Google’s — the companies can compete with one another to see who can obtain the most money from an advertiser to use the slot. Google’s critics say it has achieved a level of dominance in the ad tech market that makes fair competition impossible. Are Uber and Lyft Drivers Well Paid? It Depends on the Study. The most contested question in the gig economy may be how much workers earn, since their hourly wages can be widely uneven. 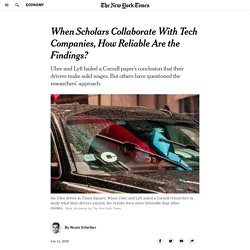 Concerns about pay have helped fuel moves in California and New York City to regulate gig-economy companies as if they were more like conventional employers. Last week brought evidence that drivers for Uber and Lyft may be much better compensated than previously understood. But it hardly settled the debate. A study by researchers at Cornell University found that the typical driver in Seattle made over $23 per hour after expenses during one week last fall.

Previous studies for other areas had put net earnings well below $20 per hour. For Facebook, a boycott and a long, drawn-out reckoning. Photo: Adobe Stock Mark Zuckerberg and Noam Chomsky are strange bedfellows in this political moment, but both found themselves on the same side this week in resisting so-called cancel culture. Journalists like Maria Ressa face death threats and jail for doing their jobs. Facebook must take its share of the blame. The sources were not authorized to speak on the record about the Facebook event, because the company declared it confidential and bound all participants with non-disclosure agreements. However, those who spoke to me broke their agreements, believing it was in the public interest to reveal what they knew. That typo was contained in a story published in 2012, before the cyber libel law came into effect. How Internet Platforms Are Combating Disinformation and Misinformation in the Age of COVID-19.