Rassegnatevi. Discontinuity is the Job - by Alex Steffen - The Snap Forward. This is When **it Gets Real, part two. 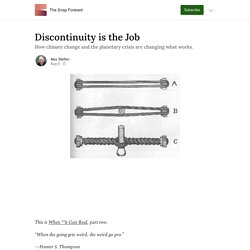 “When the going gets weird, the weird go pro.” —Hunter S. Thompson Today, the Intergovernmental Panel on Climate Change (IPCC) will release its latest assessment report, concluding that the largest peer-reviewed scientific process in history shows that humanity is in the midst of the greatest planetary crisis we have faced since we came down from the trees. Some inconvenient questions. Open letter to the politicians responsible for the Ecological Transition, in Spain and in Europe – 15/15\15.

The Roots of the Shift from Christian to Pagan Art Subjects in Europe: The Controversy of Valladolid. Limits to Growth. Limits to Growth. How ‘technopopulism’ took over. Populism and technocracy are typically depicted as opposing forces. 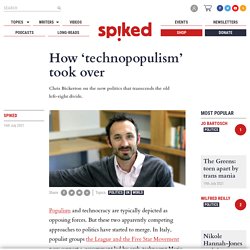 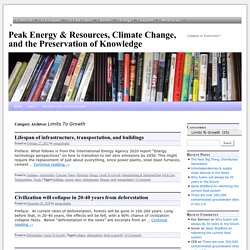 What follows is from the International Energy Agency 2020 report “Energy technology perspectives” on how to transition to net zero emissions by 2050. This might require the replacement of just about everything, since power plants, steel blast furnaces, cement … Continue reading Posted in Airplanes, Automobiles, Concrete, Dams, Electricity, Energy, Limits To Growth, Manufacturing & Industrial Heat, Oil & Gas, Transportation, Trucks Tagged buildings, cement, dams, infrastructure, lifespan, steel, transportation. Is Global Collapse Imminent? Resources are being used up at a rapid rate, pollution is rising, industrial output and food per capita is rising. The population is rising quickly.

The 1972 book Limits to Growth, which predicted our civilisation would probably collapse some time this century, has been criticised as doomsday fantasy since it was published. This research paper has found the book’s forecasts are accurate, 40 years on. If we continue to track in line with the book’s scenario, expect the early stages of global collapse to start appearing soon. Limits to Growth. After the Anthropocene. The impacts of the late Anthropocene, the age of human dominance over the planet, are now headline news: this weekend Britain experienced the warmest winter day on record. 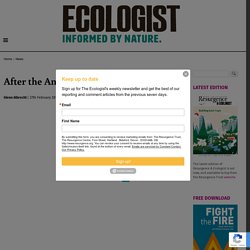 Visions of a pessimistic future for present and future generations are regularly presented to audiences in public and scientific forums. From the IPCC to cli-fi, the message is one that constantly reminds us that the hot breath of the apocalypse is on our necks. The Anthropocene has evolved under the influence of a fundamentally flawed set of dominant themes and ideas. Lived experience Our cultural, scientific and technological evolution has taken most of humanity onto a path that reduces life to isolated atoms, transforms cultural and biological diversity into homogeneity, smashes symbiotic connections between species, transgresses Earth-system boundaries, and introduces toxic elements that are beyond the evolutionary experience of all organisms. Living together. Earth and Humanity: Myth and Reality. Why Worry About Collapse? Nothing lasts forever. 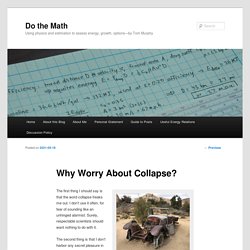 -based solutions can help cool the planet — if we act now. Projects that manage, protect and restore ecosystems are widely viewed as win–win strategies for addressing two of this century’s biggest global challenges: climate change and biodiversity loss. 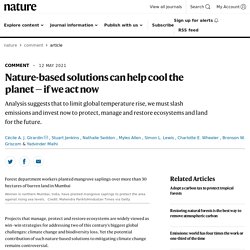 The first book of the "The Limits to Growth" series was published in 1972 by a group of researchers of the Massachusetts Institute of Technology: Dennis Meadows, Donella Meadows, Jorgen Randers and William Behrens III. 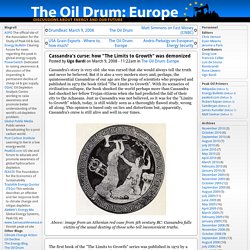 Cassandra and the limits to growth. Sometimes I wonder how it was that Cassandra, the Trojan prophetess, had so much trouble in convincing her fellow Trojan citizen that it was not such a good idea to demolish the city walls to let in that big, wooden horse. 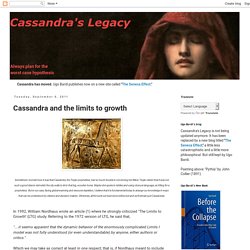 Maybe she spoke in riddles and using obscure language, as fitting for a prophetess. But in our case, facing global warming and resource depletion, I believe that it is fundamental today to arrange our knowledge in ways that can be understood by citizens and decision makers. Wayback Machine. Episode #16 Paul Kingsnorth - Wisdom from a Recovering Environmentalist — Death in The Garden. On this episode of “Death in The Garden,” we interview Paul Kingsnorth, author (The Wake, Beast, Confessions of a Recovering Environmentalist, and most recently, Alexandria, to name but a few) and creator of The Dark Mountain Project. 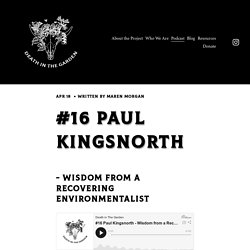 The Dark Mountain Project is a cultural movement through storytelling, writing and art, centered around the Dark Mountain Journal. We spoke with Paul about what it means to be honest with ourselves in these times of social, ecological, and spiritual breakdown. We covered the issues of the current environmental movement, and the emotional processes of accepting that these “solutions” being given to us are not solutions at all. I Have Come to Bury Ayn Rand - Issue 98: Mind - Nautilus. My father, Sloan Wilson, wrote novels that would help define 1950s America. 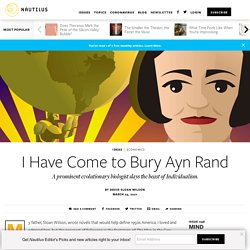 Confucius is winning the Covid-19 war - Asia Times. As the Raging Twenties unleash a radical reconfiguration of the planet, coronavirus (literally “crowned poison”) has for all practical purposes served a poisoned chalice of fear and panic to myriad, mostly Western, latitudes. Berlin-based, South Korean-born philosopher Byung-Chul Han has forcefully argued the victors are the “Asian states like Japan, Korea, China, Hong Kong, Taiwan or Singapore that have an authoritarian mentality which comes from their cultural tradition [of] Confucianism.”

Is this the end? A conversation with Vincent Mignerot – Plebity. Action in the Anthropocene. Government Agency Warns Global Oil Industry Is on the Brink of a Meltdown. 50 Cognitive Biases in the Modern World. È il capitalismo che sta uccidendo la natura, non l’umanità. What If We’re Thinking About Agriculture All Wrong? Films For Action: A Library for People Who Want to Change The World. Empty half the Earth of its humans. It's the only way to save the planet. Blueprint 9: Educational Transformation. DISSERTATION 2. Regenerative Communities Network - CAPITAL INSTITUTE. The Design Pathway Ch 1 2. Let's Regenerate the Earth! – Crowdcast. r3.0 Conference 2020. Conversations - Post-Doom.