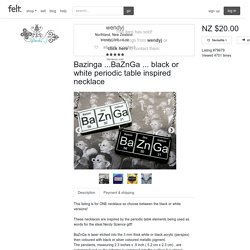 These necklaces are inspired by the periodic table elements being used as words for the ideal Nerdy Science gift! BaZnGa is laser etched into the 3 mm thick white or black acrylic (perspex) then coloured with black or silver coloured metallic pigment. The pendants, measuring 2.3 inches x .9 inch ( 5.2 cm x 2.3 cm) , are waterproof and as the lettering is engraved into the surface it is almost impossible to remove.

The fine chain is silver plated and the total length of the necklace is 18 inches (46cm). I am happy to shorten if required. Payment options Bank depositPayPalCredit card via PayPal Shipping details. Fun Paper Kirigami and Karakuri Puppets with Unexpected Behaviors by Haruki Nakamura. Official Home of the International Chindogu Society. CHINDOGU: THE UNUSELESS INVENTIONS OF KENJI KAWAKAMI. Chindogu are inventions that defy concise explanation. 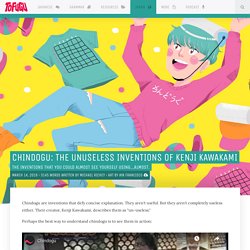 They aren't useful. But they aren't completely useless either. Bottles and Jars Made of Soap Replace Disposable Plastic Packaging. Single, Double & King Size Quilts. Fidget Cube. The Fidget Cube is a small hand-held device designed by Matthew and Mark Mclachlan, brothers and co-founders of the Colorado-based design studio Antsy Labs.[1] It has sensory tools on all sides: a switch, gears, a rolling metallic ball, a small plastic joystick, a spinning disk, a worry stone, and five buttons.[2] The cube is intended to provide an easy way to occupy one's hands and other senses, particularly for self-soothing or children who have a tendency to 'fidget'.[3][2] Description of cube sides[edit] The faces of the fidget cube carry one or two features intended to stimulate different senses. 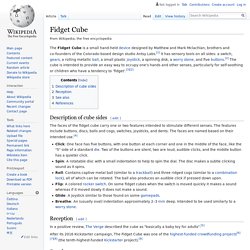 The features include buttons, discs, balls and cogs, switches, joysticks, and dents. The faces are named based on their intended use.[4] Reception[edit] Willys MB. The Willys MB and the Ford GPW, both formally called the U.S. 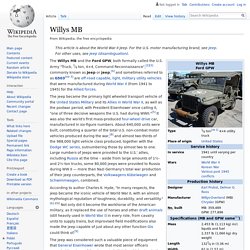 Army "Truck, ​1⁄4 ton, 4×4, Command Reconnaissance",[2][3] commonly known as Jeep or jeep,[4] and sometimes referred to as G503[nb 3] are off-road capable, light, military utility vehicles that were manufactured during World War II (from 1941 to 1945) for the Allied forces. The jeep became the primary light wheeled transport vehicle of the United States Military and its Allies in World War II, as well as the postwar period, with President Eisenhower once calling it, "one of three decisive weapons the U.S. had during WWII. "[5] It was also the world's first mass-produced four-wheel drive car, manufactured in six-figure numbers. About 640,000 units were built, constituting a quarter of the total U.S. non-combat motor vehicles produced during the war,[8] and almost two-thirds of the 988,000 light vehicle class produced, together with the Dodge WC series, outnumbering those by almost two to one. Lego Forma is trying to get you to buy Lego again. Lego is one of the most popular brands in the world, known and loved by children and nostalgic adults alike. 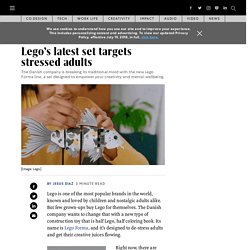 But few grown-ups buy Lego for themselves. The Danish company wants to change that with a new type of construction toy that is half Lego, half coloring book. Its name is Lego Forma, and it’s designed to de-stress adults and get their creative juices flowing. Right now, there are three types of adult Lego users. First, you have the AFOLs (as the Adult Fans of Lego call themselves). The 3Doodler - The World's First and Best 3D Pen. Life-Size Origami Becomes a Fashion Statement in Dramatic Paper Costumes Worn by Ballet Dancers. Complete Unknown bags preserve an Indian city's embroidery. How the Beatles got their famous logo. Vinyl Rewind tells the story of how Ringo Starr and the other three dudes got their iconic logo and, oh boy, it’s a doozy.

Basically, for the band’s first few years, there was no Beatles logo. It was never featured in any of the band’s original albums recorded in the U.K. The logo started its life on the bass drum of Starr’s Ludwig drum kit in April 1963, three years after John Lennon, Paul McCartney, George Harrison, and Starr got together in Liverpool and formed the most influential music group of all time. Starr got this Ludwig set from a shop, Drum City, on Shaftesbury Avenue in London. Pantone metallic shimmer colors celebrate the iPhone effect. With the rise of soft, cloth-coated gadgets, it’s become clear that fashion and interior design are impacting consumer electronics. 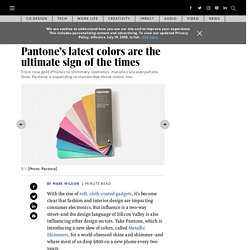 The Laserlight Core uses lasers to warn cars that you're coming. Seven years ago, as a product design student at the University of Brighton in the U.K., Emily Brooke was riding her bike when a white van started to move into her path. 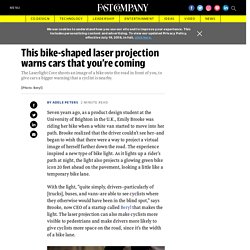 Brooke realized that the driver couldn’t see her–and began to wish that there were a way to project a virtual image of herself farther down the road. The experience inspired a new type of bike light. As it lights up a rider’s path at night, the light also projects a glowing green bike icon 20 feet ahead on the pavement, looking a little like a temporary bike lane. With the light, “quite simply, drivers–particularly of [trucks], buses, and vans–are able to see cyclists where they otherwise would have been in the blind spot,” says Brooke, now CEO of a startup called Beryl that makes the light.

The laser projection can also make cyclists more visible to pedestrians and make drivers more likely to give cyclists more space on the road, since it’s the width of a bike lane. The basic intervention seems to work. Nanoleaf: Lighting that's Smarter by Design. : Nanoleaf.me. London Design Festival. Costume Design for an Alternative History: The Man in the High Castle - Tyranny of Style. By Joe Kucharski - April 13, 2016 The Man in the High Castle, an Amazon Original Series, shows us an alternative history where Nazi Germany and Imperial Japan won World War II and now rule over the former United States. 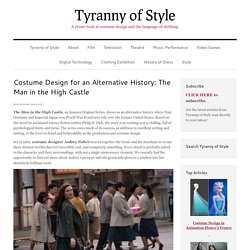 Based on the novel by acclaimed science fiction author Philip K. Project Thirty-Three. Project Thirty-Three has an amazing selection of vintage record sleeves, with some excellent examples of modernist graphic design, collected, scanned and archived by the owner of Jive Time Records, a Seattle based store specializing in used vinyl. Via ISO50. How the ShiftPod won Burning Man. For the most part, Burning Man isn’t about winners and losers. It’s about community, gifting, great (and some not so great) art, dancing, fighting against dust storms, and so much more.

But sometimes, just sometimes, you have to give a nod to the victorious. Perhaps it’s ironic, like when a member of a team that had transformed a mothballed Boeing 747 into a giant rolling art car told me they’d built a viewing platform on the wing of their plane “so that the Sparkleponies can win Instagram.” Or maybe it’s when something is just so useful that you see it everywhere on the playa (the name for Nevada’s Black Rock Desert, where Burning Man is held).

Last year, I wrote about how the ShiftPod, a $1,300 Burning Man camp project turned business success, had become a multimillion-dollar company. Brainstring - How to play. Basic play The basic play of Brainstring Original, Original Retro Advanced and 'R' is the same. Any string is interchangeable with another, so there are many possibilities for play. Home — 36 Days of Type. Sinuously Curved Benches Made with Thin Strips of Steam-Bent Hardwood. This Watch Changes Your Perception of Time. In Brief. The Rubik’s cube, the most popular toy ever, gets redesigned. Art Design Illustration A Pop-Up Homage to Caspar Henderson’s Book of Barely Imagined Beings by Maria Chernakova. Which Country Has the Best Flag? Your browser isn't supported. How To Solve A Rubik's Cube. Defunct Old Cars Given New Life as Pools and Pizza Ovens by Benedetto Bufalino. The Remarkable, War-Torn, Spacefaring History of the Slinky.

Jacket Required - The Art of the Football Shirt. 24 Funny Amazon Reviews in 2017 - Best & Most Hilarious Amazon Reviews Ever. Angular Geometry: Colorful Daily GIFs from the Mind of Tyler Haywood. Why the DC-3 Is Such a Badass Plane. Fashion: The Uniforms of Braniff Airlines – Designed by legendary Emilio Pucci. Remember when flying was fun? Ace & Tate Journal. Boggle. Boggle is a word game designed by Bill Cooke, invented by Allan Turoff[1] and originally distributed by Parker Brothers.[2] The game is played using a plastic grid of lettered dice, in which players attempt to find words in sequences of adjacent letters.