After humanity: A timeline of the Earth after we go extinct. After two days Without active maintenance and pumping, New York City’s subways flood with water and become impassable. 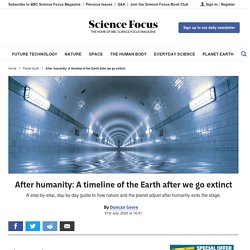 Seven days in Fuel runs out at the emergency generators that pump coolant into nuclear power plants. Approximately 450 reactors around the world begin to melt down. Earth - There are diseases hidden in ice, and they are waking up. Changes in Tropical Cyclone Number, Duration, and Intensity in a Warming Environment. During the hurricane season of 2004, there were 14 named storms in the North Atlantic, of which 9 achieved hurricane intensity. 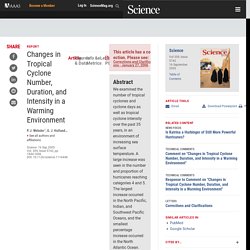 Four of these hurricanes struck the southeast United States in rapid succession, causing considerable damage and disruption. 2 degrees Celsius. Interactive: The impacts of climate change at 1.5C, 2C and beyond. Freak hailstorm buries major Mexico city under FIVE FEET of ice – as California bakes in 38C. A FREAK hailstorm has buried a major city in Mexico under 5ft of ice – leaving dozens of drivers trapped and damaging buildings. 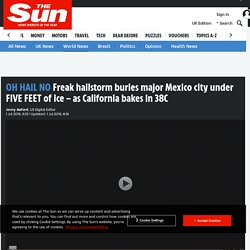 Roads were completely blocked after hail and heavy rain bombarded Guadalajara, the capital of Jalisco state in western Mexico on Sunday. Piles of hail reached as high as 1.5 metres or 5ft in some places, with Rancho Blanco and the Industrial Zone the worst affected areas. Jalisco Governor Enrique Alfaro Ramírez said he had “never seen” such a heavy blitz of hail in the area before. “I went there to evaluate the situation and I witnessed scenes which I had never seen before: hail accumulation more than a meter high, and then we wonder if climate change exists,” he said. Some streets were transformed into rivers of dense moving hail and several people had to be rescued from the roofs of their cars. Numerous cars were damaged after being buried under the piles of hail. How Humans Could Halt Climate Change By 2050 : Goats and Soda : NPR.

The Plan to Grab the World's Carbon With Supercharged Plants. CO2 levels higher than any point since the evolution of humans. That was the reaction of meteorologist Eric Holthaus to news that atmospheric carbon dioxide levels have reached heights not seen in the entirety of human existence -- not history, existence. 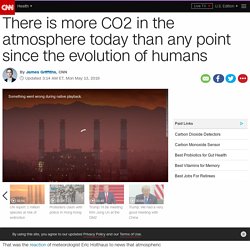 According to data from the Mauna Loa Observatory in Hawaii, the concentration of CO2 in the atmosphere is over 415 parts per million (ppm), far higher than at any point in the last 800,000 years, since before the evolution of homo sapiens. Holthaus spotted the new high on Sunday when it was tweeted out by the Scripps Institution of Oceanography, which measures daily CO2 rates at Mauna Loa along with scientists from the National Oceanic and Atmospheric Administration. Measurements have been ongoing since the program was started in 1958 by the late Charles David Keeling, for whom the Keeling Curve, a graph of increasing CO2 concentration in the atmosphere, is named. "This is the first time in human history our planet's atmosphere has had more than 415ppm CO2," Holthaus said in a widely shared tweet.

Climate change visualized: How Earth's temperature has changed since 1970 - Axios. Future - The poisons released by melting Arctic ice. In 2012, Sue Natali arrived in Duvanny Yar, Siberia, for the first time. 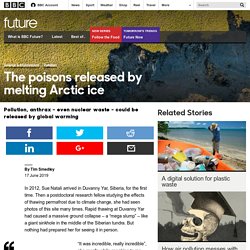 Then a postdoctoral research fellow studying the effects of thawing permafrost due to climate change, she had seen photos of this site many times. Rapid thawing at Duvanny Yar had caused a massive ground collapse – a “mega slump” – like a giant sinkhole in the middle of the Siberian tundra. But nothing had prepared her for seeing it in person. As you walk along you see what look like logs poking out the permafrost. But they aren’t logs, they are the bones of mammoths and other Pleistocene animals – Sue Natali “It was incredible, really incredible”, she recalls while speaking to me from The Woods Hole Research Center, Massachusetts, where she is an associate scientist. What Natali describes is the visible, dramatic effects of a rapidly warming Arctic.

The organic-rich permafrost holds an estimated 1,500 billion tonnes of carbon. Worst-case climate change scenario is even worse than we thought. Better climate science has opened the door to lawsuits against Big Oil. Last summer, Ryan Coonerty, a county supervisor in Santa Cruz, got word that the neighboring county of San Mateo was about to take a bold step in adapting to climate change. 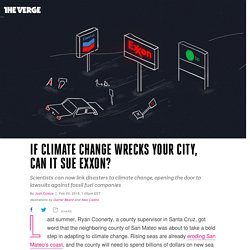 Rising seas are already eroding San Mateo’s coast, and the county will need to spend billions of dollars on new sea walls and other infrastructure to protect itself in the years to come. So in July, San Mateo, along with Marin County and the city of Imperial Beach, sued 37 fossil fuel companies, arguing that they should help pay for the damage their products cause. Explaining Extreme Events from a Climate Perspective - American Meteorological Society. This sixth edition of explaining extreme events of the previous year (2016) from a climate perspective is the first of these reports to find that some extreme events were not possible in a preindustrial climate. 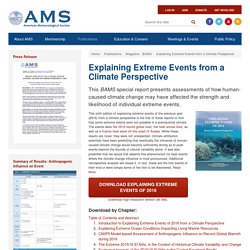 The events were the 2016 record global heat, the heat across Asia, as well as a marine heat wave off the coast of Alaska. While these results are novel, they were not unexpected. Climate attribution scientists have been predicting that eventually the influence of human-caused climate change would become sufficiently strong as to push events beyond the bounds of natural variability alone. It was also predicted that we would first observe this phenomenon for heat events where the climate change influence is most pronounced. International Climate Impacts. Areas in Africa currently at risk for (a) hunger, (b) natural hazard-related disaster risks, (c) malaria (derived from historical rainfall and temperature data [1950-1996]), and (d) epidemics of meningococcal meningitis (based on epidemic experience, relative humidity [1961-1990] and land cover). 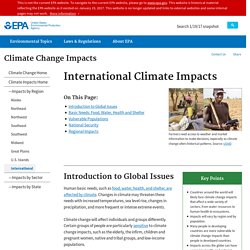 Source: IPCC (2007) (PDF) Exit Click on the image to see a larger version. Semi-arid and arid areas (such as the Mediterranean, southern Africa, and northeastern Brazil) are particularly vulnerable to the impacts of climate change on water supply. Over the next century, these areas will likely experience decreases in water resources, especially in areas that are already water-stressed due to droughts, population pressures, and water resource extraction. [2], [6], [8] Scary amounts of mercury have been found lurking in the permafrost. 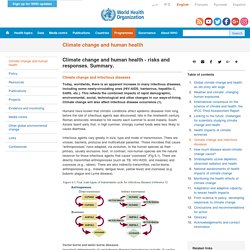 Climate change and human health - risks and responses. Summary. Climate Impacts on Human Health. On This Page: Overview The impacts of climate change include warming temperatures, changes in precipitation, increases in the frequency or intensity of some extreme weather events, and rising sea levels. 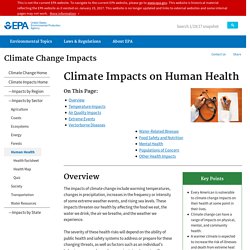 These impacts threaten our health by affecting the food we eat, the water we drink, the air we breathe, and the weather we experience. The EPA has approved the release of weaponized mosquitoes in 20 US states. McKinney, Texas Kevin Korenthal was once a registered Democrat, living in a California suburb. After struggling to keep his small public relations firm afloat for years, he decided to pack up his family and two dogs. Humanity's Existence Is Completely Dependent On Earth : 13.7: Cosmos And Culture. Stromatolites (deposits built by colonies of cyanobacteria), are seen underwater at high tide in Shark Bay, Western Australia. Auscape/UIG via Getty Images hide caption toggle caption. Report: Impact of climate change on humans "potentially irreversible" - Axios. Scientists Lay Out Evidence: How Climate Change Is Already Affecting Health : Goats and Soda.