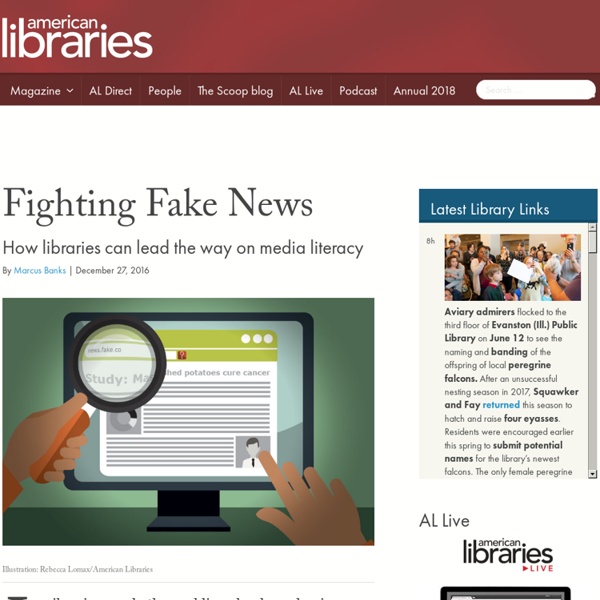 Librarians—whether public, school, academic, or special—all seek to ensure that patrons who ask for help get accurate information. Given the care that librarians bring to this task, the recent explosion in unverified, unsourced, and sometimes completely untrue news has been discouraging, to say the least. According to the Pew Research Center, a majority of US adults are getting their news in real time from their social media feeds. These are often uncurated spaces in which falsehoods thrive, as revealed during the 2016 election. To take just one example, Pope Francis did not endorse Donald Trump, but thousands of people shared the “news” that he had done so. Completely fake news is at the extreme end of a continuum. The news-savvy consumer is able to distinguish fact from opinion and to discern the hallmarks of evasive language and half-truths. Librarians and journalists: natural allies Librarians can help change this trend. Information literacy at your library

10 Ways to Spot a Fake News Article - EasyBib Blog For many of us, 2016 is going down as a year to forget. Election upsets, Zika, the Syrian crisis, and unfortunately tons of fake news about all of the above and everything in between. Denzel Washington was recently quoted as saying, “If you don’t read the newspaper, you’re uninformed. How to Spot Fake News Fake news is nothing new. But bogus stories can reach more people more quickly via social media than what good old-fashioned viral emails could accomplish in years past. Concern about the phenomenon led Facebook and Google to announce that they’ll crack down on fake news sites, restricting their ability to garner ad revenue. Perhaps that could dissipate the amount of malarkey online, though news consumers themselves are the best defense against the spread of misinformation. Not all of the misinformation being passed along online is complete fiction, though some of it is. Snopes.com has been exposing false viral claims since the mid 1990s, whether that’s fabricated messages, distortions containing bits of truth and everything in between.

School Libraries Fight Fake News Fake news has been all over the real news lately. From Mark Zuckerburg to Pizzagate, fake news is a huge problem, and it’s not going away on its own. According to a recent study from Stanford University, approximately 80 percent of students struggled to evaluate the credibility of an online resource. How To Spot Fake News Critical thinking is a key skill in media and information literacy, and the mission of libraries is to educate and advocate its importance. Discussions about fake news has led to a new focus on media literacy more broadly, and the role of libraries and other education institutions in providing this. When Oxford Dictionaries announced post-truth was Word of the Year 2016, we as librarians realise action is needed to educate and advocate for critical thinking – a crucial skill when navigating the information society.

10 Ways to Spot a Fake News Article - EasyBib Blog For many of us, 2016 is going down as a year to forget. Election upsets, Zika, the Syrian crisis, and unfortunately tons of fake news about all of the above and everything in between. Denzel Washington was recently quoted as saying, “If you don’t read the newspaper, you’re uninformed. If you do read the newspaper, you’re misinformed.” The Long and Brutal History of Fake News The fake news hit Trent, Italy, on Easter Sunday, 1475. A 2 ½-year-old child named Simonino had gone missing, and a Franciscan preacher, Bernardino da Feltre, gave a series of sermons claiming that the Jewish community had murdered the child, drained his blood and drunk it to celebrate Passover. The rumors spread fast. Before long da Feltre was claiming that the boy’s body had been found in the basement of a Jewish house.

Trustworthy advice for a post-truth world - University of Alberta How do you tell fact from fiction in an online world where fake news often seems like the real thing? When the Oxford English Dictionary picked “post-truth” as word of the year for 2016, it seemed to signal a shift in the way we perceive the world—the triumph of emotional response over rational thought. But our susceptibility to “fake news” is not a new problem. It goes back at least as far as the 1890s, when the term “yellow journalism” emerged in the New York newspaper wars to denote a brand of sensational reporting more interested in circulation than accuracy. As early as 1620, philosopher Francis Bacon warned of false notions that impede human understanding, most notably the “idols of the cave” that trap us in our own conceptual biases.

Search, fake news and politics - an international study How are people using search, social media and other forms of media to get information about politics, politicians and political issues? Are we right to be worried about the impact search algorithms have on shaping political opinions or about inaccurate, false and politically biased information that distorts public opinion? A study, conducted jointly by researchers from the Oxford Internet Institute (University of Oxford) and the Quello Center (Michigan State University) questioned 14,000 internet users from France, Germany, Italy, Poland, Spain, the UK and the USA about how they used traditional and online media. Search performance has the potential to support or undermine democratic processes.

How to outsmart fake news in your Facebook feed It doesn't have to be this way. Fake news is actually really easy to spot -- if you know how. Consider this your New Media Literacy Guide. 1. Does the story come from a strange URL?