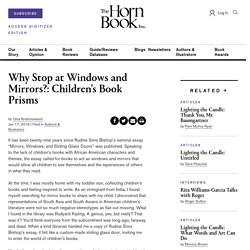 It has been twenty-nine years since Rudine Sims Bishop’s seminal essay “Mirrors, Windows, and Sliding Glass Doors” was published. Speaking to the lack of children’s books with African American characters and themes, the essay called for books to act as windows and mirrors that would allow all children to see themselves and the experiences of others in what they read. At the time, I was mostly home with my toddler son, collecting children’s books and feeling inspired to write. As an immigrant from India, I found myself searching for mirror books to share with my child. I discovered that representations of South Asia and South Asians in American children’s literature were not so much negative stereotypes as flat-out missing.

Nearly three decades later, those questions of whose stories get told and by and to whom have not gone away. Culturally Responsive Curriculum Scorecard - Resources - NYU Steinhardt. An Updated Look at Diversity in Children's Books. Research Shows Reading Improves Kids Emotional Intelligence. Growing up in a small town in Iowa, books were my window to a larger world. 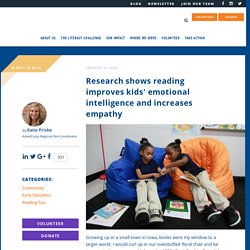 I would curl up in our overstuffed floral chair and be transported to a new world–from the 1930s Dust Bowl in Out of the Dust by Karen Hesse to the castle in Ella Enchanted by Gail Carson Levine. Books taught me about people who had different life experiences and grew up in different places than the Midwest. The author, David Foster Wallace, accurately summarizes the importance of reading fiction and how fiction can help us better understand others, saying, “Fiction is about what it means to be human.” Where Are The "Normal" Books? In This Library, Y'all = ALL. Fellow Tricia Ebarvia: "How Inclusive Is Your Literacy Classroom Really?" In 1981, my family moved eighteen miles from northeast Philadelphia to the suburbs. 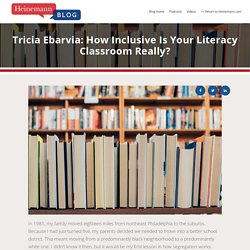 Because I had just turned five, my parents decided we needed to move into a better school district. This meant moving from a predominantly black neighborhood to a predominantly white one. There is no diverse book — ImagineLit. If you have ever attended any session where I have presented and the topic of diversity has come up, you know I am quick to tell attendees that I do not give out diverse book lists. 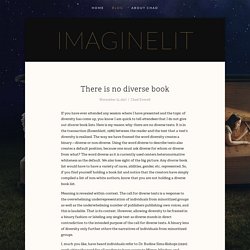 Here is my reason why: there are no diverse texts. It is in the transaction (Rosenblatt, 1986) between the reader and the text that a text’s diversity is realized. The way we have framed the word diversity creates a binary—diverse or non-diverse. Using the word diverse to describe texts also creates a default position, because one must ask diverse for whom or diverse from what? Incombustible Ideas: The Subtle Bigotry of Book Banning by Jennifer LaGarde and Travis Crowder. Books are powerful. 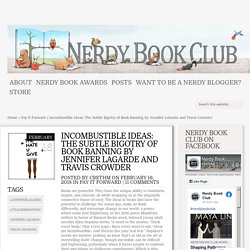 They have the unique ability to transform, inspire, and educate, all while wrapping us in the singularly connective tissue of story. The ideas in books also have the potential to challenge the status quo, make us think differently, and encourage change in our world: a power which some find frightening. In her 2010 poem Manifesto, written in honor of Banned Books week, beloved young adult novelist Ellen Hopkins wrote, “A word to the unwise./ Torch every book./ Char every page./ Burn every word to ash./ Ideas are incombustible./ And therein lies your real fear.”

John Green: Why We Need Diverse Books. Why Diverse Texts Are Not Enough. NOTE: This post was originally published and written for Literacy Today, a publication of the International Literacy Association (ILA). 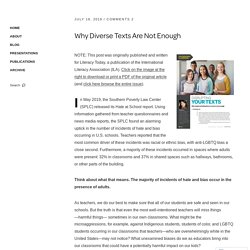 Click on the image at the right to download or print a PDF of the original article (and click here browse the entire issue). In May 2019, the Southern Poverty Law Center (SPLC) released its Hate at School report. Keeping Your Library Collection Smelling F.R.E.S.H! Why You Should Weed More Than Just Books at the End of the Year. At the end of my first year at Stewart Middle Magnet School, I ended up with a great opportunity. 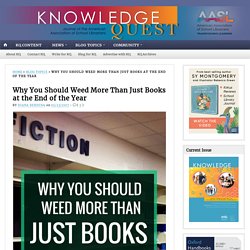 We replaced an aging air conditioning system over the summer, meaning that ALL the furniture had to be moved into the gym. Luckily, the books could stay on the shelves with plastic covering them. The library at that time was extremely cluttered – I had already been doing an extensive weeding of the collection. Weeding - NYC School Librarian Guidebook - Homepage at NYC DOE Office of Library Services. Weeding/De-selection Guidelines Weeding is an essential component of any collection development plan in order to maintain a collection that meets the needs of students and the curriculum. The weeding guidelines should include reasons for weeding and criteria for de-selection.

Weeding Without Controversy through inclusion and transparency. The Librarian Who Hates Books Internet Addiction in 1998 Earlier this year my daughter came home from school to tell me about a controversy at her school. 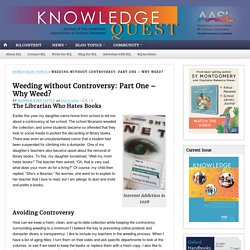 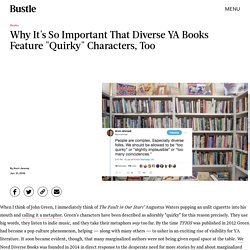 Green's characters have been described as adorably "quirky" for this reason precisely. They use big words, they listen to indie music, and they take their metaphors way too far. By the time TFIOS was published in 2012 Green had become a pop culture phenomenon, helping — along with many others — to usher in an exciting rise of visibility for YA literature. It soon became evident, though, that many marginalized authors were not being given equal space at the table.

We Need Diverse Books was founded in 2014 in direct response to the desperate need for more stories by and about marginalized people, eventually leading to another reinvigoration of YA. The non-profit organization was co-founded by authors Ellen Oh and Dhonielle Clayton, with the mission of putting more books featuring diverse characters into the hands of more children. About WNDB. ‘Read Woke’ School Reading Challenge Makes an Impact.

Jason Reynolds on book haters. How YA Literature Is Leading the Queer Disabled Media Revolution. I love a good historical fantasy, so I picked up The Gentlemen’s Guide to Vice and Virtue on the day that it was published, because I have been dying to read something more than non-canonically romantic subtext between queer characters before the year 1900. 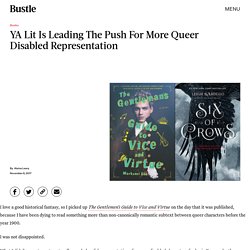 I was not disappointed. What I didn’t expect was to get well-rounded, solid representation of a queer disabled character of color in Percy, who the protagonist, Monty, is trying to swallow his feelings for after years of being his best friend. I’m the queer girl who is dating her best friend after a year of unspoken romantic feelings, so I spent most of the book in fraught tears. My girlfriend was exhausted by me shouting, “Just be together, dammit!” Across the living room at my copy. The Present and Future of Disability in YA Books. Disabled or Mislabeled: Comics and Graphic Novels About Disabilities Bibliography – Tales from the Nerdy. This is a brief break from my regular program posts. The below bibliography is from the panel I was part of at New York Comic Con. It’s not a complete bibliography, but my fellow panelists and I wanted to share some of the things we found while working on the panel.

Mental Illness Bechdel, Alison Fun Home Bradshaw, Hannah Dark Early. Graphic Novels: Suggestions for Librarians. Introduction Graphic novels are one of the fastest growing categories in publishing and bookselling. Today’s graphic novels are far more sophisticated and varied in content than the comics that preceded them and enjoy a level of respect previously denied to this form of popular entertainment: they are the subject of reviews, book-length surveys, museum exhibits and academic study, as well as recipients of prestigious literary awards (Art Speigelman’s Maus, for instance, won the Pulitzer Prize in 1992).

As the U.S. News and World report phrased it, “The comic books of our youth [have] grown up.” While comics are published as magazines, their “grown up” version – the graphic novel – appears in book format. Narratives composed out of visual images or out of images and words have a very long history – a history that stretches back to the first cave paintings.