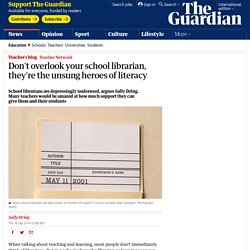 But in a school where the librarian or learning resource centre manager is valued and properly made use of, we can teach important skills. Librarians are in the privileged position of being able to work with teachers across all subjects and students of all ages, observing the inner workings of a school from a slight distance. One thing I’ve noticed is that the belief that students are adept at using the latest technology to find the information they need is simply not true. Students turn up in the library with the ubiquitous task of researching a topic and they don’t know where to start. Usually they head to Google, which takes them straight to Wikipedia (it’s top of the list so it doesn’t take much effort). Teachers are busy enough as it is and often don’t have the time to critically assess all the sources of information out there.

10 Reasons Librarians Are More Important Than Ever. Read how these passionate and savvy educators support schools and students every day. 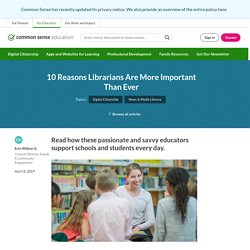 It's National Library Week, and we couldn't resist paying homage to one of the most important members of the school community: librarians. Also known as library media specialists, librarians play a unique role in our schools. Often asked to take on a wide range of duties, these passionate and savvy educators deserve more than only a week of praise.

In addition to budget cuts, key challenges for school librarians include: Want to learn more? The School Librarian: Your Ultimate Digital Resource. Why we need qualified school librarians. Striving Readers? Hire Librarians. | by Nader Qaimari As an ESL student and a child from an immigrant, economically disadvantaged family raised in blue-collar northern Ohio, I know first-hand the power a good book can have on a child who feels different and inferior from everyone around him. 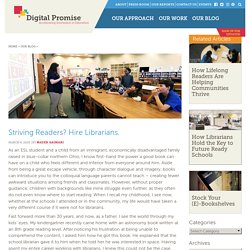 Aside from being a great escape vehicle, through character dialogue and imagery, books can introduce you to the colloquial language parents cannot teach – creating fewer awkward situations among friends and classmates. However, without proper guidance, children with backgrounds like mine struggle even further, as they often do not even know where to start reading. When I recall my childhood, I see now, whether at the schools I attended or in the community, my life would have taken a very different course if it were not for librarians.

Fast forward more than 30 years, and now, as a father, I see the world through my kids’ eyes. My worlds collided. We are always looking for the magic wand to “fix” our education system. How to be a Teacher Librarian Rock Star. Are your library policies unintentionally hurting students? Big leap for school libraries. Steven Yates has a message for would-be school librarians. 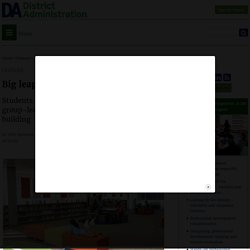 “If you’re coming to this because you like to read and you want to manage a collection of books, then you showed up about 30 years too late to the profession,” says Yates, a former high school librarian who teaches in the school library media certification program at the University of Alabama. The school library’s mission—matching resources with those who need them—has not changed, he says. But its role is evolving: With materials increasingly offered online, schools are transforming their libraries into active places for students to work together and get creative, with staff who do much more than manage books. Here’s a look at how administrators and their teams are redesigning libraries. Sidebar: Going digital Inspiring thinkers Poway USD near San Diego built its Design39Campus, a K8 school that opened in 2014, around the concept of design thinking—an approach to problem-solving that promotes experimentation and collaboration.

Demystifying Librarian Leadership. We keep saying it amongst ourselves: librarians are leaders. 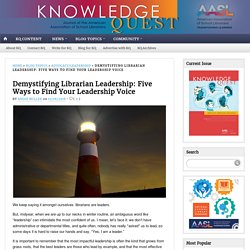 But, midyear, when we are up to our necks in winter routine, an ambiguous word like “leadership” can intimidate the most confident of us. I mean, let’s face it: we don’t have administrative or departmental titles, and quite often, nobody has really *asked* us to lead, so some days it is hard to raise our hands and say, “Yes, I am a leader.” It is important to remember that the most impactful leadership is often the kind that grows from grass roots, that the best leaders are those who lead by example, and that the most effective leaders are not always the ones who are appointed. The best leadership is the kind that recognizes and addresses the specific needs of colleagues.

It does not look like everybody else’s–it looks like you, but there are some things that every aspiring librarian should consider when defining his or her leadership style. Are school libraries on the way out or up? There’s a dangerous misconception about school libraries that’s got Leigh Hobbs fired up, and the popular author and Australian Children's Laureate won’t rest until blinkered principals are set straight. 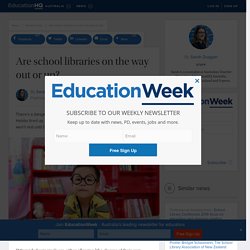 “Misguided principals are either allowing [the closure of their own school libraries], or themselves getting rid of the libraries, and thinking that because of the digital age we don’t need books,” Hobbs tells EducationHQ. “I think it’s very serious … the problem seems to be that whether there is a (well resourced) library or a librarian in the individual school really depends on the finances of the school, and as I understand it, the principal basically decides where the money goes.” Teen Services Competencies for Library Staff. Introduction | Competencies | Supplementary Materials | Acknowledgements | Download the full Teen Services Competencies for Library Staff. 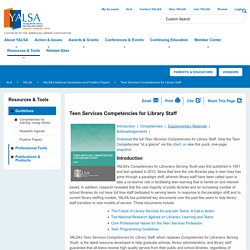 View the Teen Competencies "at a glance" via this chart, or view this quick, one-page snapshot. Introduction YALSA’s Competencies for Librarians Serving Youth was first published in 1981 and last updated in 2010. Since that time the role libraries play in teen lives has gone through a paradigm shift, wherein library staff have been called upon to take a co-learner role in facilitating teen learning that is hands-on and interest-based.

In 2030, Librarians Will Be in Demand. A fascinating new report takes a fresh look at what the workforce is going to look like in the future and which skills will be highly sought after. 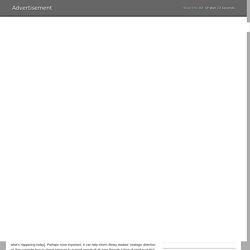 According to “The Future of Skills: Employment in 2030”, there will be an increased call for librarians, curators, and archivists, among other occupations. That’s just the start of the finds in this exploration of where humans will fit in the future, complementing rather than being completely supplanted by automation. The report—released on September 28 by Pearson, Nesta, and Oxford University—asks how work will be impacted by the intersection of seven “megatrends.” Change driven by new technology, including the rise of automation, is right up top. Changing the Conversation About Librarians. Bridging the Divide between School Librarians and School Administrators. As a classroom teacher of 8 years, 3 years as a high school assistant principal, and 6 years as a head high school principal, I have had the opportunity to learn from many colleagues. 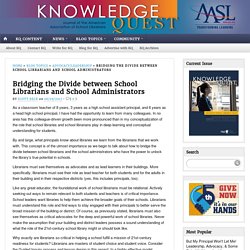 In no area has this colleague-driven growth been more pronounced than in my conceptualization of the role that school libraries and school librarians play in deep learning and conceptual understanding for students. By and large, what principals know about libraries we learn from the librarians that we work with. This concept is of the utmost importance as we begin to talk about how to bridge the divide between school librarians and the school administrators who have the power to unlock the library’s true potential in schools. Librarians must see themselves as advocates and as lead learners in their buildings.