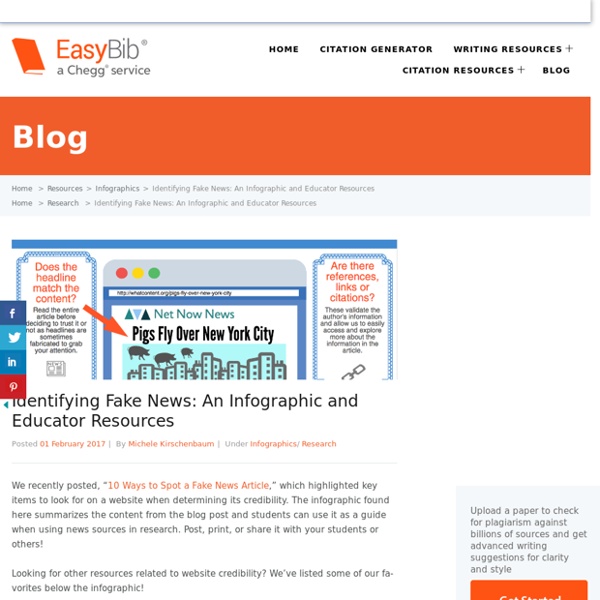 We recently posted, “10 Ways to Spot a Fake News Article,” which highlighted key items to look for on a website when determining its credibility. The infographic found here summarizes the content from the blog post and students can use it as a guide when using news sources in research. Post, print, or share it with your students or others! Looking for other resources related to website credibility? We’ve listed some of our favorites below the infographic! Channel One News: Lesson Plan: How to Spot Fake News This lesson plan, by Channel One News (a Houghton Mifflin Harcourt company), includes discussion questions, a writing activity, and a video that can be shown to students to help them understand that they shouldn’t believe everything that they read or hear. The News Literacy Project’s Ten Questions for Fake News Detection This checklist can be distributed to students to help them determine if a news article is fake or not. Websites to Test Your Students Related blog posts:

Fake Hurricane Sandy Photos Spread On Internet As Storm Barrels Toward Northeast On Facebook, the stirring picture has more than 70,000 likes and 90,000 shares, and the viral image was picked up by NPR, The Washington Post, The Daily Beast, Talking Points Memo and others according to Poynter. The only problem? It’s not a picture from Hurricane Sandy. Fake news. It's complicated. - First Draft News This article is available also in Deutsch, Español, Français and العربية By now we’ve all agreed the term “fake news” is unhelpful, but without an alternative, we’re left awkwardly using air quotes whenever we utter the phrase. The reason we’re struggling with a replacement is because this is about more than news, it’s about the entire information ecosystem. And the term fake doesn’t begin to describe the complexity of the different types of misinformation (the inadvertent sharing of false information) and disinformation (the deliberate creation and sharing of information known to be false). To understand the current information ecosystem, we need to break down three elements:

From Gutenberg to Zuckerberg in 14 Lessons The full News Literacy course, developed at Stony Brook University, organizes the material into 8 concepts that are spread amongst our 14 week course that take students from the first information revolution of Johannes Gutenberg's printing press to the Digital Age of Mark Zuckerberg's Facebook. Each lesson stands alone or can easily be integrated into your program. Below, find a summary of each of those lessons, and a link to the most updated version of the teaching materials for each from our professors at Stony Brook University. Each of the following Course Packs include PowerPoint presentations, associated media, lecture notes, and recitation materials.

UW class on how to spot fake data goes viral within hours Two University of Washington professors are taking aim at BS in a provocatively named new course they hope to teach this spring. The professors would like to push the course materials online — teaching it as a MOOC, for example, a freely available course taught over the web. When it came to picking a title for the course they will teach this spring, University of Washington professors Carl Bergstrom and Jevin West decided to abandon academic stodginess and get edgy. Their new course title?

3 Fast, Free Lesson Plans to Fight Fake News The fake news epidemic is disturbing. How do we fight it? Well, we can take a hint from how the medical community fights the flu or any other virus. We inoculate ourselves. In this post, I’ll teach you how I teach about fake news. The Smell Test: Educators can counter fake news with information literacy. Here’s how. Illustration by Steve Brodner Discerning fact from fiction in news and online content has never been more challenging. From “pizzagate”—false reports of a child sex ring operating in a DC pizza parlor—and creepy clown attacks to retweeted election headlines touting events that never happened, fake news is rampant.

4 Sites to Fight Fake News Common Sense Education has released a 1-minute video featuring four websites to separate fact from fiction. When the next viral story, makes it to class, take break to discuss media literacy and help your students determine how these sites can be of value. This site is all about following the money. It points out the connections among political contributions, lobbying data, and government policy. How Photos Fuel the Spread of Fake News During a campaign stop in South Carolina last winter, Hillary Clinton stumbled as she climbed the steps of an antebellum mansion in Charleston. Aides helped her regain her balance in a vulnerable but nondescript moment captured by Getty photographer Mark Makela. He didn’t think much of it until August, when the alt-right news site Breitbart touted it as evidence of Clinton’s failing health.

10 Ways to Search Google for Information That 96% of People Don’t Know About In our era of advanced technology and high-speed Internet connections, you can find information on virtually anything. In the space of just a few minutes, we can find recipes for the tastiest pie or learn all about the theory of wave-particle duality. But more often than not, we have to sift through a vast body of knowledge to get the information we need, and this can take hours rather than minutes.