Films on Peace — Peace, Conflict, and Social Justice. This roster was originally created by J. 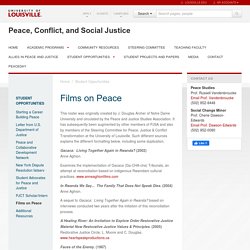 Douglas Archer of Notre Dame Univeristy and circulated by the Peace and Justice Studies Association. It has subsequently been augmented by other members of PJSA and also by members of the Steering Committee for Peace, Justice & Conflict Transformation at the University of Louisville. Such different sources explains the different formatting below, including some duplication. 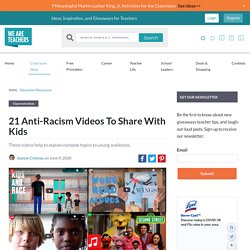 The idea of tackling such complicated and hurtful topics in our homes and classrooms is daunting, but we can’t look away. Making Space: Speak Up. Educators and Race: A Conversation with Author Ijeoma Oluo on Tackling Systemic Racism in U.S. Education. How to Develop Culturally Responsive Teaching for Distance Learning. Hammond distinguishes the differences between culturally responsive education, multicultural education and social justice education. 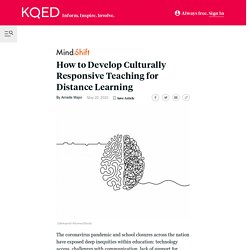 Each is important, but without a focus on building students’ brain power, they will experience learning loss. When it comes to distance learning, applying culturally responsive teaching requires “remixing” education by borrowing from the best practices in how kids learn (Montessori, project-based learning, etc.) in a way that repositions the student as the leader of his own learning. By giving students more agency, the idea is to disrupt old routines around teaching and learning that make the student dependent on the teacher for receiving knowledge.

Microaggressions in the Classroom. As a white, privileged, cisgender, heterosexual male, I can walk into most situations with people of my own race, or with mixed race, gender, sexual orientation, or socio-economic status groups, and not have to be on my guard. 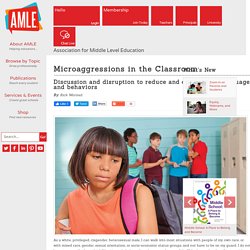 I do not have to worry if others think I legitimately belong there because of course I do. Nobody wonders how I got my job, and my input is most often given credibility. Anti-racism resources for white people. Teaching Resources - Teaching for Change : Teaching for Change. Anti-Bias Education Articles, Recommended Books Anti-bias curriculum is an approach to early childhood education that sets forth values-based principles and methodology in support of respecting and embracing differences and acting against bias and unfairness. 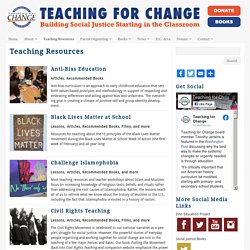 The overarching goal is creating a climate of positive self and group identity development. Black Lives Matter at School. Beyond golden rule. Black Writing Resources in the UK. In support of the Black Lives Matter movement, we have compiled the following lists of publishers, organisations and resources for black writing in the UK, including submission windows currently open to Black writers. 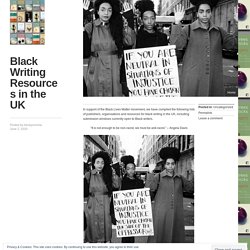 TT Speak Up Guide 0. ‘No reader is too young to start’: anti-racist books for all children and teens. The weight of the world seems heavier than ever right now. 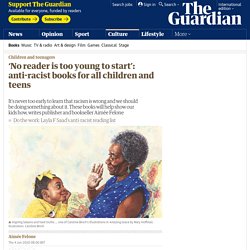 The incomprehensible killing of George Floyd has shone a bright light, yet again, on the pervasive racism faced daily by the black community. Free Resources for Supporting Antiracist Education - BrainPOP. 7 reasons why reverse racism doesn't exist. The state of race relations in the U.S., a country where people seem to be under the mistaken belief that we are “post-racial,” is dire. 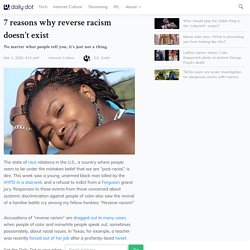 This week saw a young, unarmed black man killed by the NYPD in a stairwell, and a refusal to indict from a Ferguson grand jury. Responses to these events from those concerned about systemic discrimination against people of color also saw the revival of a familiar battle cry among my fellow honkies: “Reverse racism!” Accusations of “reverse racism” are dragged out in many cases when people of color and nonwhite people speak out, sometimes passionately, about racial issues.

In Texas, for example, a teacher was recently forced out of her job after a profanity-laced tweet from her private account, in which she referred to white people as “crackers.” Make no mistake: The district’s pressure wasn’t about the use of some four letter words. #Breaking: Reverse racism doesn’t exist. 75 Things White People Can Do for Racial Justice - Equality Includes You - Medium. Me_And_White_Supremacy_Workbook__FINAL_BOOK_ Anti-racism resources for white people. So You Want to Learn About Racism. Unity - Vooks. Skip to main content Unity The Unity channel highlights stories from underrepresented groups, along with titles to help children better understand how to process their feelings during these significant times. 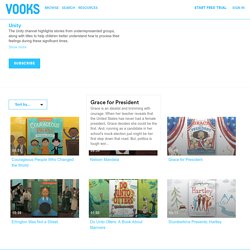 Subscribe Share Share with your friends Courageous People Who Changed the World “You have within you the strength… to change the world.” From Abraham Lincoln to Rosa Parks, Courageous People who Changed the World is a perfect introduction to historical figures who stood up to make a difference in the world. Nelson Mandela Discover the dramatic and inspirational story of Nelson Mandela. Grace for President Grace is an idealist and brimming with courage.

Ellington Was Not a Street In this reflective poetic tribute, the author remembers growing up when many of the great figures in African-American history gathered in her family home to talk, share ideas and even sing. Talking About Race. Teaching Materials - Zinn Education Project. Explore More Teaching Materials The Color Line Teaching Activity. 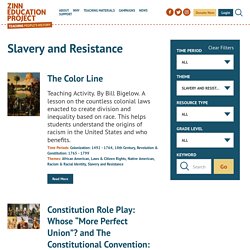 By Bill Bigelow. A lesson on the countless colonial laws enacted to create division and inequality based on race. This helps students understand the origins of racism in the United States and who benefits. Teaching Materials - Zinn Education Project. Explore More Teaching Materials The 1934 West Coast Longshore Strike Teaching Activity. Diversity, Equity And Justice. Promoting Social Imagination Through Interior Monologues - Zinn Education Project. One of the most important aims of teaching is to prompt students to empathize with other human beings. This is no easy accomplishment in a society that pits people against each other, offers vastly greater or lesser amounts of privileges based on accidents of birth, and rewards exploitation with wealth and power. Empathy, or “social imagination,” as Peter Johnson calls it in The Reading Teacher, allows students to connect to “the other” with whom, on the surface, they may appear to have little in common.

A social imagination encourages students to construct a more profound “we” than daily life ordinarily permits. A social imagination prompts students to wonder about the social contexts that provoke hurtful behaviors, rather than simply to dismiss individuals as inherently “evil” or “greedy.” One teaching method we use to promote empathy, and return to unit after unit, is the interior monologue. See Table of Contents.