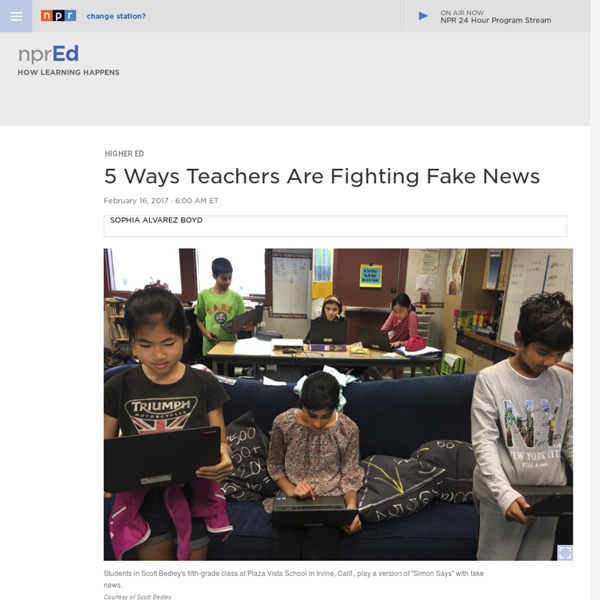 UW class on how to spot fake data goes viral within hours Two University of Washington professors are taking aim at BS in a provocatively named new course they hope to teach this spring. The professors would like to push the course materials online — teaching it as a MOOC, for example, a freely available course taught over the web. When it came to picking a title for the course they will teach this spring, University of Washington professors Carl Bergstrom and Jevin West decided to abandon academic stodginess and get edgy.

The tricks propagandists use to beat science Back in the 1950s, health professionals became concerned that smoking was causing cancer. Then, in 1952, the popular magazine Reader’s Digest published “Cancer by the Carton,” an article about the increasing body of evidence that proved it. The article caused widespread shock and media coverage. 10 Ways to Search Google for Information That 96% of People Don’t Know About In our era of advanced technology and high-speed Internet connections, you can find information on virtually anything. In the space of just a few minutes, we can find recipes for the tastiest pie or learn all about the theory of wave-particle duality. But more often than not, we have to sift through a vast body of knowledge to get the information we need, and this can take hours rather than minutes. This is why Bright Side has put together a list of the most effective methods for searching Google to help you find the precious material you're looking for in just a couple of clicks. 1. Either this or that

"fake news" not new 2 clicks Donald Trump may well be remembered as the president who cried “fake news.” It started after the inauguration, when he used it to discredit stories about the size of the crowd at his inauguration. He hasn’t let up since, labeling any criticism and negative coverage as “fake.” Just in time for awards season, he rolled out his “Fake News Awards” and, in true Trumpian fashion, it appears he is convinced that he invented the term. Trustworthy advice for a post-truth world - University of Alberta How do you tell fact from fiction in an online world where fake news often seems like the real thing? When the Oxford English Dictionary picked “post-truth” as word of the year for 2016, it seemed to signal a shift in the way we perceive the world—the triumph of emotional response over rational thought. But our susceptibility to “fake news” is not a new problem. It goes back at least as far as the 1890s, when the term “yellow journalism” emerged in the New York newspaper wars to denote a brand of sensational reporting more interested in circulation than accuracy.

How biased is your news source? You probably won’t agree with this chart Are we even aware of our biases anymore? If you look at this chart and are convinced your “extreme” source belongs in the middle, you just might be part of the problem plaguing America today. “In the past, national evening news programs, local evening news programs, and the front pages of print newspapers were dominated by fact-reporting stories,” says the chart’s creator, patent attorney Vanessa Otero. “Now, however, many sources people consider to be ‘news sources’ are actually dominated by analysis and opinion pieces.” She released the first version of the chart back in 2016, and she’s updated it several times since.

10 Ways to Spot a Fake News Article - EasyBib Blog For many of us, 2016 is going down as a year to forget. Election upsets, Zika, the Syrian crisis, and unfortunately tons of fake news about all of the above and everything in between. Denzel Washington was recently quoted as saying, “If you don’t read the newspaper, you’re uninformed. Teaching Adolescents How to Evaluate the Quality of Online Information An essential part of online research is the ability to critically evaluate information. This includes the ability to assess its level of accuracy, reliability, and bias. In 2012, my colleagues and I assessed 770 seventh graders in two states to study these areas, and the results definitely got our attention.

School Libraries Fight Fake News Fake news has been all over the real news lately. From Mark Zuckerburg to Pizzagate, fake news is a huge problem, and it’s not going away on its own. According to a recent study from Stanford University, approximately 80 percent of students struggled to evaluate the credibility of an online resource. This is a little disheartening, since this is a huge part of what we teach as school librarians, and it appears we’ve not been very effective. There really isn’t a magic formula or checklist that replaces the critical thinking needed to determine if information is credible. Based on the recent surge of fake news and the results of the Stanford study, we decided to overhaul our website evaluation lessons by doing the following:

False News Travels Farther, Faster Than The Truth, MIT Study Finds They say bad news travels fast, but a new study suggests that false news does as well. And, at least on Twitter, it goes even farther than facts. "False news travels farther, faster, deeper and more broadly than the truth in every category of information and sometimes by an order of magnitude," said Sinan Aral, the paper’s senior author and head of MIT’s Initiative on the Digital Economy.

American Libraries Magazine Librarians—whether public, school, academic, or special—all seek to ensure that patrons who ask for help get accurate information. Given the care that librarians bring to this task, the recent explosion in unverified, unsourced, and sometimes completely untrue news has been discouraging, to say the least. According to the Pew Research Center, a majority of US adults are getting their news in real time from their social media feeds. These are often uncurated spaces in which falsehoods thrive, as revealed during the 2016 election. To take just one example, Pope Francis did not endorse Donald Trump, but thousands of people shared the “news” that he had done so. Completely fake news is at the extreme end of a continuum.