Trump tweets amid Capitol riot as leaders beg him to address nation. U.S. 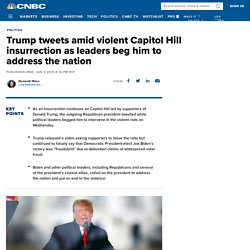 President Donald Trump gestures as he speaks during a rally to contest the certification of the 2020 U.S. presidential election results by the U.S. Congress, in Washington, U.S, January 6, 2021. Jim Bourg | Reuters As an insurrection continues on Capitol Hill led by supporters of Donald Trump, the outgoing Republican president tweeted while political leaders begged him to address the nation to intervene in the violent riots on Wednesday. Video shows Capitol Police cop getting crushed by protesters. Shocking video from the DC riots shows a bloodied police officer screaming for help as he’s crushed by protesters inside the Capitol building. 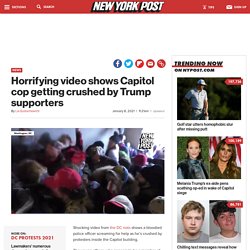 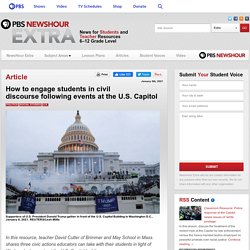 Capitol PoliticsSocial StudiesU.S. Supporters of U.S. In this resource, teacher David Cutler of Brimmer and May School in Mass. shares three civic actions educators can take with their students in light of Wednesday’s events at the U.S. Directions: Read the NewsHour summary (watch this 8-minute video which recaps the events) and discuss the meaning of civic engagement and the importance of civil discourse with your students. Summary of Wednesday’s events from NewsHour: A mob of violent pro-Trump protesters overwhelmed security at the U.S. Some Republicans in both chambers declared that they would object to the counting of some states where President Donald Trump lost his closest races to Biden. Earlier, Trump spoke at a rally where he urged supporters to march to the Capitol to demand that the results be overthrown. From teacher David Cutler: Classroom resource: Three ways to teach the insurrection at the U.S. Capitol.

Directions: Watch the video, read the summary below and answer the discussion questions. 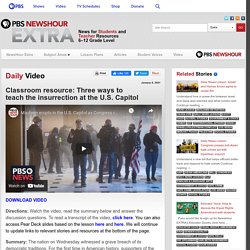 To read a transcript of the video, click here. You can also access Pear Deck slides based on the lesson here and here. We will continue to update links to relevant stories and resources at the bottom of the page. Summary: The nation on Wednesday witnessed a grave breach of its democratic traditions. For the first time in American history, supporters of the losing presidential candidate forcibly disrupted the official counting of electoral votes. Jordan Klepper vs. Trump Supporters: The Complete Collection. Outrage after John Wayne's old interview resurfaces. Players, Coaches, & Refs Protest for Racial Justice Amid NBA's Return. #JusticeforGeorge.

Introduction - Activism, Anti-Racism, Dissent and Peaceful Protest - LibGuides at Prairie View A&M University. African Activist Archive Project This project preserves records and memories of activism in the United States that supported the struggles of African peoples against colonialism, apartheid, and social injustice from the 1950s through the 1990s. 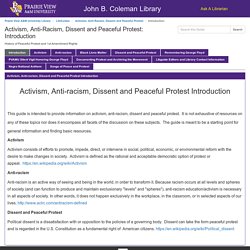