Productivity 101: How to Use Personal Kanban to Visualize Your Work 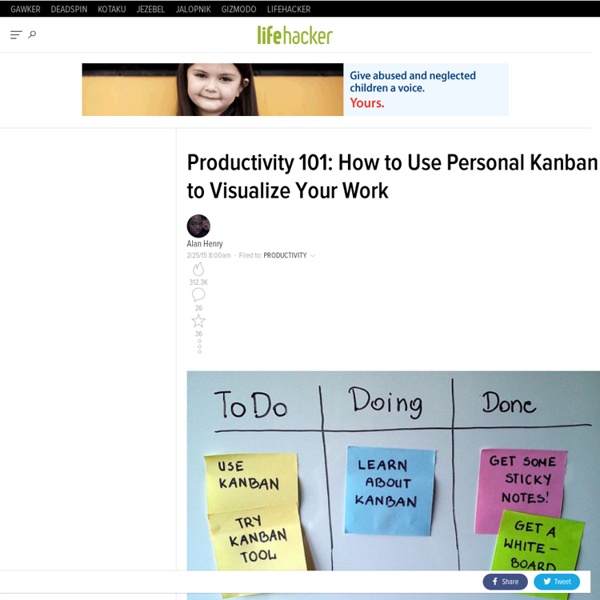 The Chokehold of Calendars Meetings may be toxic, but calendars are the superfund sites that allow that toxicity to thrive. All calendars suck. And they all suck in the same way. A Life of Productivity – 100 time, energy, and attention hacks to be more productive When I graduated University with a business degree last May, I received two incredible full-time job offers, both of which I declined because I had a plan. For exactly one year, from May 1, 2013, through May 1, 2014, I would devour everything I could get my hands on about productivity, and write every day about the lessons I learned on A Year of Productivity. Over the last 12 months I have conducted countless productivity experiments on myself, interviewed some of the most productive people in the world, and read a ton of books and academic literature on productivity, all to explore how I could become as productive as possible, and then write about the lessons I learned. One year, 197 articles, and over one million hits later, I’ve reached the end of my year-long journey, but not before going out with a bang. This article’s a long one, but it’s pretty skimmable!

5 Unusual Ways to Start Working Smarter, Not Harder, Backed by Science One of the things I love about the culture at Buffer is the emphasis on working smarter, not harder. Our team is all about getting plenty of sleep, exercise and recreation time so that our time spent working is as productive as it can be. Working harder can be an easy habit to slip into, though. Sometimes it’s hard to switch off at the end of the day, or to take time out on the weekend and stop thinking about work. With a startup of my own to run, I find this even harder to manage lately. The Morning Routine Experts Recommend for Peak Productivity What’s the best way to start your day so that you really get things done? Laura Vanderkam studied the schedules of high-achievers. What did she find? Almost all have a morning routine. I’ve interviewed a ton of top experts about their productivity secrets: Tim Ferriss, Cal Newport, Dan Ariely, Charles Duhigg, and others. But you’re busy.

How Keeping Things Simple Makes You A Productive Entrepreneur Running your own business is a complicated affair; making it successful can be even more complicated. If you don’t have a plan to be productive and keep focused, the details that you are responsible for can quickly overwhelm you. In fact, one of the biggest failings of new entrepreneurs is to get so caught up in an avalanche of unimportant details that more important priorities get left unattended on the table.

Benefits of Simplicity to Productivity Simplicity is often perceived as boring, unattractive and unremarkable. Majority of people want something striking and complicated. But as Leonardo da Vinci has said, Early Agile Scaling at Adobe - Agile For All Early Agile Scaling at Adobe July 11, 2015 | by: Peter Green Scaling agile is a hot topic these days. I’ve recently given a presentation at a few local user groups about the experience of scaling agile at Adobe. The presentation describes early scaling as well as our experience helping a large shared technology group adopt a model using the Spotify Approach as a template. Below is a synopsis of the early scaling approach which naturally emerged at Adobe. 10 requirements of the perfect manager If you could hire your next boss, what selection criteria would you use? Alan Norton shares a make-believe want ad aimed at finding the ideal manager. Haven't you wished at least once that you could hire your next boss? You might win the lottery, buy the company, and do just that. But chances are if that happened, you would be out the door in less time than it took to pick the numbers.

Globalization Blog Illustrations by Julia Feng (OhISeeItNow.com) Over the past decade, many software development teams have switched their development methodology from a waterfall model to something much more agile such as Scrum. Through this transition, their expectations towards other teams such as Localization have changed and these teams have had to improve their agility too. At Adobe, we have a centralized Localization group that currently supports 135 product and functional teams. Most of these teams have adopted some form of agile development methodologies and have reduced their development cycle from 18-24 months to yearly, quarterly, monthly and, these days, bi-weekly releases.

A Pattern Language for Productivity, Pattern #3: Checklists by Andre · 4 Comments Checklists are mental inventories made physical. Instead of trying to hold your thoughts on a topic entirely in your head, write them down as a list. Experiment with making checklists for anything and everything that has your attention. Having a list to review reduces the need to rethink what you need to consider about a topic. Since short-term memory limits the number of items that someone can think about simultaneously, checklists provide a simple structure for spreading things out for reviewing in parallel (see Distributed Cognition).

43 Simple Ways To Simplify Your Life Post written by Sherri Kruger. Follow me on Twitter. Simplicity. How can we make things simpler, more streamlined, or more efficient? Is this all just hype or is there actually something to this simplicity thing? How To be so Productive You Can't Stand it You might think that creatives as diverse as Internet entrepreneur Jack Dorsey, industrial design firm Studio 7.5, and bestselling Japanese novelist Haruki Murakami would have little in common. In fact, the tenets that guide how they – and exceptionally productive creatives across the board – make ideas happen are incredibly similar. Here are 10 laws of productivity we’ve consistently observed among serial idea executors: 1. Break the seal of hesitation.

EE204 Business Management for Engineers and Computer Scientists Product/Market Fit The only thing that matters is getting to product/market fit. by Marc Andreesen, June 25, 2007 I Prefer This Over That A couple weeks ago I tweeted: Apparently it resonated. I think that’s more retweets than anything else original I’ve said on Twitter in my seven years on the platform. (SEVEN years? Holy snack-sized sound bytes! But I digress.)