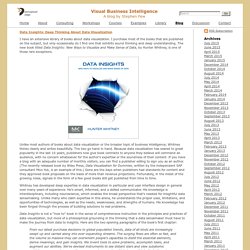 I purchase most of the books that are published on the subject, but only occasionally do I find one that exhibits sound thinking and deep understanding. The new book titled Data Insights: New Ways to Visualize and Make Sense of Data, by Hunter Whitney, is one of those rare exceptions. Unlike most authors of books about data visualization or the broader topic of business intelligence, Whitney thinks clearly and writes beautifully.

The two go hand in hand. Because data visualization has soared to great popularity in the last 10 years, publishers now give book contracts to anyone they believe will command an audience, with no concern whatsoever for the author’s expertise or the soundness of their content. Whitney has developed deep expertise in data visualization in particular and user interface design in general over many years of experience. Whitney takes the time that’s necessary to express his ideas clearly and fully. Mutations in RECQL Gene Are Associated with Predisposition to Breast Cancer. Foundation Medicine Announces Its Collaboration with the National Cancer Institute on Exceptional Responders Initiative (NASDAQ:FMI) First-of-its-kind Exploratory Study Investigates Unique Molecular Indicators of Tumors Associated with Exceptional Treatment Responses to Drug Therapies in Patients With Cancer --(BUSINESS WIRE)-- (NASDAQ:FMI) today announced that it has entered into a Collaboration Agreement with the (NCI) on the Exceptional Responders Initiative (ERI), a nationwide research study to further understand the molecular underpinnings that may lead to exceptional responses to drug therapies in patients with cancer. 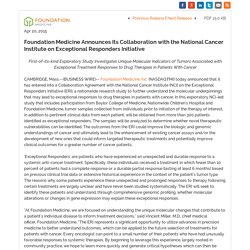 In this exploratory NCI-led study that includes participation from , Nationwide Children's Hospital and , tumor samples collected from individuals prior to initiation of the therapy of interest, in addition to pertinent clinical data from each patient, will be obtained from more than 300 patients identified as exceptional responders.

The samples will be analyzed to determine whether novel therapeutic vulnerabilities can be identified. What Are Exceptional Responders? Summary Scientists are switching their thinking about “failed” clinical trials in which a drug doesn’t work for a majority of patients and shifting their focus onto the occasional patients who do benefit. 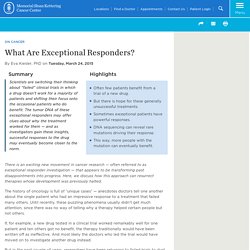 The tumor DNA of these exceptional responders may offer clues about why the treatment worked for them — and as investigators gain these insights, successful responses to the drug may eventually become closer to the norm. Highlights Often few patients benefit from a trial of a new drug. But there is hope for these generally unsuccessful treatments. Exceptional-Responders-Q-and-A. Posted: September 24, 2014 Updated: March 23, 2015 Key Points What is the purpose of the Exceptional Responders Initiative? 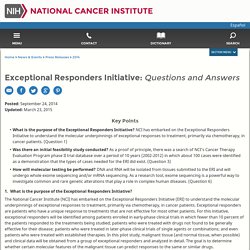 UC San Diego, UC San Francisco Launch New Cancer Cell Mapping Initiative. Researchers from the University of California, San Diego School of Medicine and University of California, San Francisco, with support from a diverse team of collaborators, have launched an ambitious new project – dubbed the Cancer Cell Map Initiative or CCMI – to determine how all of the components of a cancer cell interact. 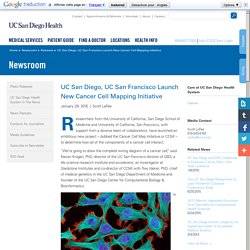 “We’re going to draw the complete wiring diagram of a cancer cell,” said Nevan Krogan, PhD, director of the UC San Francisco division of QB3, a life science research institute and accelerator, an investigator at Gladstone Institutes and co-director of CCMI with Trey Ideker, PhD, chief of medical genetics in the UC San Diego Department of Medicine and founder of the UC San Diego Center for Computational Biology & Bioinformatics. Cultured HeLa cancer cells. Thomas Deerinck, National Center for Microscopy and Imaging Research, UC San Diego. In recent years, progress in genome sequencing has made it possible to decipher hundreds of mutations found in a patient’s tumor. The Journal of Precision Medicine Cancer cartographers - The Journal of Precision Medicine. Cancer Cell Map Initiative aims to provide biological context to how genetic mutations affect cell function SAN DIEGO – A broad collaboration between researchers from the University of California, San Diego School of Medicine and University of California, San Francisco announced earlier this year aims to take a big data approach to creating a map of cellular action to gain an understanding of how genetic mutations give rise to cancer. 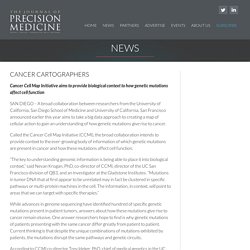 Called the Cancer Cell Map Initiative (CCMI), the broad collaboration intends to provide context to the ever-growing body of information of which genetic mutations are present in cancer and how these mutations affect cell function. “The key to understanding genomic information is being able to place it into biological context,” said Nevan Krogan, PhD, co-director of CCMI, director of the UC San Francisco division of QB3, and an investigator at the Gladstone Institutes. Allele Frequency Community.