Shocking Inside Story of Global Arms Trade. Film Credits A Film by Johan Grimonprez A Dillywood and Louverture Films Production Co-Produced by Onomatopee Films Final Cut for Real In Association With Fork Films Zap-o-Matik Based on the Book The Shadow World By Andrew Feinstein Stories Written & Read By Eduardo Galeano Directed by Johan Grimonprez Director of Photography Nicole Mackinlay Hahn Edited by Per K. 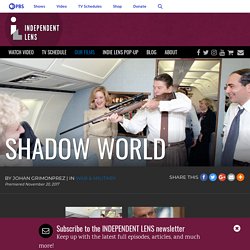 What if we could meet the challenges of the ongoing environmental crisis without changing our behaviour and practices in any way? 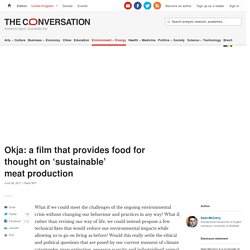 What if, rather than revising our way of life, we could instead propose a few technical fixes that would reduce our environmental impacts while allowing us to go on living as before? Would this really settle the ethical and political questions that are posed by our current moment of climate catastrophe, mass extinction, resource scarcity and industrialised animal slaughter? These are some of the questions that are posed by Netflix’s latest original movie, Okja.

This changes everything. Operation Solstice documentary on Battle of Beanfield. The Four Horsemen (A must see Documentary) Al Gore Q&A and video interview: Fixing democracy to combat climate change. It is more than ten years since Al Gore’s documentary An Inconvenient Truth brought climate change to the masses. 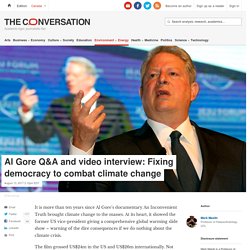 At its heart, it showed the former US vice-president giving a comprehensive global warming slide show – warning of the dire consequences if we do nothing about the climate crisis. The film grossed US$24m in the US and US$26m internationally. Not only was the film a financial success but it was also a critical success and won two Oscars. An Inconvenient Truth has been credited for raising international public awareness of climate change and re-energising the environmental movement. Bag It The Movie: Is Your Life Too Plastic? Pump: Documentary Full 1080p HD. STRAWS - a film by linda booker. Film . A Plastic Ocean . About - Plastic Oceans Foundation. Plastic Paradise. Free Documentaries Online — RT Documentary Channel. HBO FILMS Too Big to Fail. A Plastic Ocean. Documentary: A Plastic Whale. WHAT THE HEALTH. COWSPIRACY: The Sustainability Secret. Official Trailer [HD] Michael Moore in TrumpLand. You've Been Trumped Too (2016) 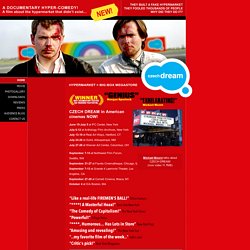 The resulting scandal, alternately hilarious and discomfiting, illuminates the waking nightmare of consumerism in a country still adjusting to the strengths and pitfalls of the concept. " Eddie Cockrell, Variety. The story of the largest global protest that would change the world forever. The Film — Racing Extinction. Capitalism: A Love Story - Documentary. The Corporation (Full Documentary) The Beautiful Truth. Pandora's Promise. American Experience - Radio Bikini (PBS Documentary) - Part 1. Bilderberg’$ Club. This film, by Queralt Antu, explores the truth about Bilderberg’s club. 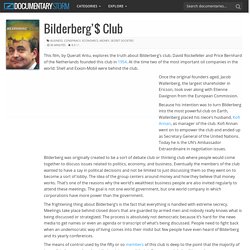 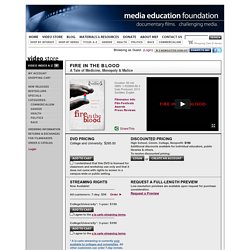 Shot on four continents and featuring contributions from global figures such as Bill Clinton, Desmond Tutu, and Joseph Stiglitz, the film takes us inside the lethal decision-making process that led to this humanitarian catastrophe. And it shows how millions more people would have died if not for the passion and tactical ingenuity of a group of courageous and relentless activists.

The result is a gripping look at corporate greed and government collusion, the cutthroat economics of medicine and healthcare, and the power of ordinary people to make meaningful change on a global scale. Filmmaker Info Praise from Renowned Figures and Scholars. Aluna the Movie. About the Movie ALUNA is being made by and with the KOGI, a genuine lost civilization hidden on an isolated triangular pyramid mountain in the Sierra Nevada de Santa Marta, Colombia, nearly five miles high, on the Colombian-Caribbean coast. 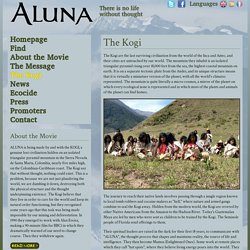 The Kogi say that without thought, nothing could exist. This is a problem, because we are not just plundering the world, we are dumbing it down, destroying both the physical structure and the thought underpinning existence. The Kogi believe that they live in order to care for the world and keep its natural order functioning, but they recognized some years ago that this task was being made impossible by our mining and deforestation. In 1990 they emerged to work with Alan Ereira, making a 90-minute film for BBC1 in which they dramatically warned of our need to change course.

Just Do It. What about me? - 1giant leap. My Stuff. My Stuff You lock away all your worldly possessions in storage, and decide to take back only one thing a day... 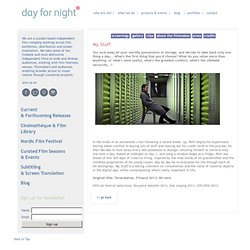 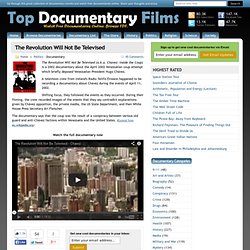 Chavez: Inside the Coup) is a 2002 documentary about the April 2002 Venezuelan coup attempt which briefly deposed Venezuelan President Hugo Chávez. A television crew from Ireland's Radio Telifís Éireann happened to be recording a documentary about Chávez during the events of April 11, 2002. Shifting focus, they followed the events as they occurred. During their filming, the crew recorded images of the events that they say contradict explanations given by Chávez opposition, the private media, the US State Department, and then White House Press Secretary Ari Fleischer. Who Killed the Electric Car? Spanner Films. Official Food, Inc. Movie Site - Hungry For Change? Why We Fight - A Film By Eugene Jarecki.