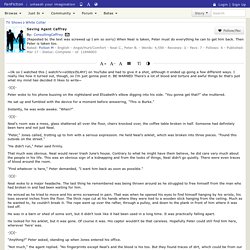 V=eO0zxI5L4hY) on YouTube and had to give it a shot, although it ended up going a few different ways. I really like how it turned out, though, so I'm just gonna post it. BE WARNED There's a lot of blood and torture and awful things bc that's just what my mind has decided it likes to write~ Peter woke to his phone buzzing on the nightstand and Elizabeth's elbow digging into his side. "You gonna get that? " He sat up and fumbled with the device for a moment before answering, "This is Burke. " Instantly, he was wide awake. Neal's room was a mess, glass shattered all over the floor, chairs knocked over, the coffee table broken in half. "Peter," Jones called, trotting up to him with a serious expression. "He didn't run," Peter said firmly. That much was obvious. "Find whatever is here," Peter demanded, "I want him back as soon as possible.

" Neal woke to a major headache. He winced as he tried to move and his arms screamed in pain. "Anything? " Mind Games Ch 1, White Collar. Disclaimer: I do not own White Collar or the characters (sadly), they belong to Jeff Eastin. 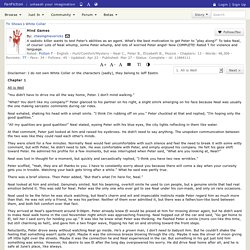 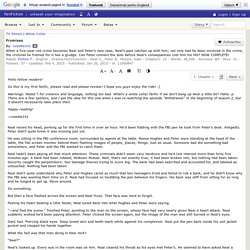 So this is my first fanfic, please read and please review! I hope you guys enjoy the ride! :) Warnings: Rated T for violence and language, nothing too bad. What's a white collar fanfic if we don't bang up Neal a little bit? Happy reading! ~cosette141 Neal raised his head, perking up for the first time in over an hour.

He was sitting in the FBI conference room, surrounded by agents at the table. Neal hadn't been paying all that much attention. Neal didn't quite understand why Peter and Hughes cared so much that two teenagers tried and failed to rob a bank, and he didn't know why the FBI was wasting their time on it. Do something. But then a face flashed across the screen and Neal froze. Fic: No Alarms and No Surprises, Please - RabidChild's World. Title: No Alarms and No Surprises, PleaseRating: PG-13Characters/Pairings: Elizabeth, Neal, Peter genSpoilers: CountdownContent Notice: Descriptions of offscreen tortureWord Count: ~8,200Summary: Neal is kidnapped but escapes, finding his way to the Burkes’ for help. 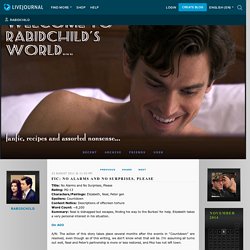 Elizabeth takes a very personal interest in his situation. On AO3 A/N: The action of this story takes place several months after the events in “Countdown” are resolved, even though as of this writing, we don’t know what that will be. 23076. WC - Ice Breaker (with a Twist) - Sometimes... Title: Ice Breaker (with a Twist)Author: angelita26Characters/Pairings: Gen – Neal, Peter, Elizabeth, JonesRating: PG-13Word Count: ~2100Beta: embroiderama, who made this so much better with her suggestions. 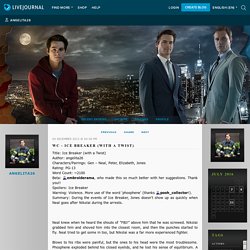 Thank you!! Spoilers: Ice BreakerWarning: Violence. More use of the word 'phosphene' (thanks pooh_collector!). Neal knew when he heard the shouts of "FBI! " Blows to his ribs were painful, but the ones to his head were the most troublesome. On a painful inhale, the piece of gum that he'd been chewing and had all but forgotten got sucked in his throat, and then he was choking. Monster Headache - Fluencca - White Collar. "I wouldn't do that, if I were you," Caffrey said, and pointed. 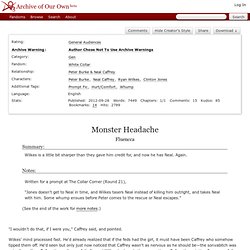 Wilkes' mind processed fast. He'd already realized that if the feds had the girl, it must have been Caffrey who somehow tipped them off. He'd seen but only just now noticed that Caffrey wasn't as nervous as he should be—the sonvabitch was actually smiling. Before the smile was fully formed Wilkes had made the connections. Before the pointing finger was fully extended he decided to act. The things you learn when you're not afraid to get dirty, those things save your life one day. Out of the Blue - kriadydragon - White Collar. It was embarrassing afterward, because this time Neal hadn't done anything. 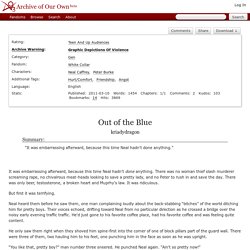 There was no woman thief slash murderer screaming rape, no chivalrous meat-heads looking to save a pretty lady, and no Peter to rush in and save the day. There was only beer, testosterone, a broken heart and Muprhy's law. It was ridiculous. But first it was terrifying. Neal heard them before he saw them, one man complaining loudly about the back-stabbing “bitches” of the world ditching him for pretty boys. He only saw them right when they shoved him spine-first into the corner of one of block pillars part of the guard wall.

“You like that, pretty boy?” They shoved him to the ground, kicked him in the side. “Ain't so pretty now!” “Huh!” “Maybe I should just toss you over the side!” Unbreakable, White Collar. Title: UnbreakableRating: RGenre: Gen, H/CWords: 2156Characters: Neal, Peter, ElWarnings: Violence and torture oh mySummary: Neal's captors insist that he has a debt to repay. 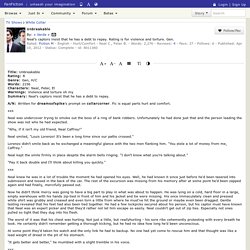 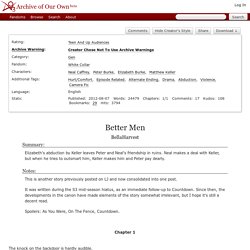 At Peter’s feet, Satchmo lifts his head, pricks his ears and sniffs the air. He thumps his tail against the floorboards in a moderately excited rhythm before yawning widely and returning his muzzle to its resting position across Peter’s right loafer. Peter makes no move to get up from the couch. He chokes his beer bottle in both fists. Across the room the knock is repeated in the same nondescript staccato but delivered with more determination. The door slowly swings inward. “Peter,” Neal breaks the silence.